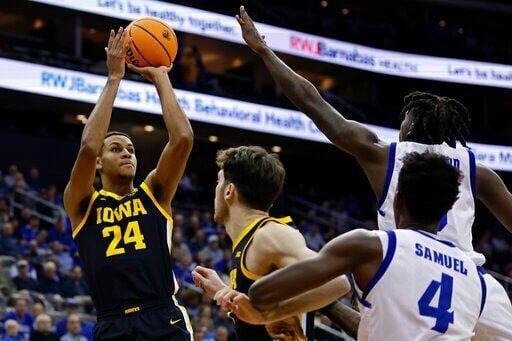 Iowa forward Kris Murray shoots against Seton Hall during the first half of the Hawkeyes' 83-67 road win earlier this month. Murray finished with 29 points in the victory. IOWA CITY — Before the season tipped off, Kris Murray insisted he had no intention of duplicating what his brother Keegan Murray brought to the court last season for the Iowa basketball team.

The junior forward saw himself averaging fewer points and more assists as his role with the Hawkeyes expanded following his brother’s early exit to the NBA as the fourth pick in this year’s draft.

Four games into the season, Murray continues to do things his own way but has become an early-season offensive force for Iowa.

When the Hawkeyes fell behind 10-2 at Seton Hall in a Nov. 16 game at Seton Hall, it was Murray who jump-started the Iowa offense and led the team to an 83-67 road victory.

When only three of the Hawkeyes’ first 10 shots dropped in Monday’s 100-64 win over Omaha, it was Murray who stepped up.

He hit Iowa’s first six field goals in the game and connected on 11 consecutive attempts on his way to a 13-of-17 game from the field.

He totaled a career-high 30 points to help move the Hawkeyes to 4-0 on the season, one game after matching his previous career-best with 29 points against the Pirates.

As Iowa prepares for Friday’s 6 p.m. contest against Clemson at the Emerald Coast Classic, Murray is averaging 23.8 points and eight rebounds per game while shooting 62.5% from the field and 47.8% in 23 attempts from 3-point range.

And at the line, he hasn’t missed in 14 attempts.

He’s been able to impact the game in ways that he has wanted to, something that ranked his main objective coming into the season.

Monday, that started on the offensive end of court.

“I got myself into a rhythm early, just easy baskets, open jump shots, it just came to me," Murray said. “It was different areas where I could affect the game. It’s what I want to do and that had to be scoring (Monday night) just to give us a jump-start."

The seemingly effortless early-season effort reminds teammate Patrick McCaffery of what he watched a year ago while sharing the court with Keegan Murray.

“How many hard shots did Keegan take last year? Not many," he said. “It just was easy."

“Kris had that kind of roll tonight," McCaffery said. “It looked like that for Kris."

He sees him taking and making high-percentage shots, working within the flow of whatever is taking place on the court and stepping up when challenged.

“Nothing bothers him," coach McCaffery said. “There was a lot of jawing the other night (at Seton Hall) to that effect. He got 29, got 30 tonight. He isn’t paying any attention to it."

That will continue, Murray insists.

“I know people get into comparing us a lot and he definitely had a really good season last year, so it would be easy to kind of follow in his shadow, I guess," Murray said.

“But I know I’m not the same person as him. I’m doing my own thing at Iowa and I’m trying to take that as far as I can."

Murray leads a starting five that all averages in double figures as the 25th-ranked Hawkeyes prepare to face Clemson in the opening round of the four-team tournament in Niceville, Fla.

TCU, off to a 3-1 start, and a California team that is winless through five games, will be Iowa’s opponent on Saturday.

The back-to-back game days will test Murray and the Hawkeyes’ depth.

“It’s one game at a time, always is, but to be part of games like this, that’s why you play at Iowa," he said. “It will help us as we move forward."

Murray looks forward to it, too, expecting to learn from how people defend him following his fast offensive start to the season.

Murray blocks out block, goes for 30

The fourth-ranked Iowa women's basketball team may have suffered more than its first loss of the season Thursday night when Kansas State edged the Hawkeyes, 84-83.

IOWA CITY — A twisted ankle and an elbow to the nose weren’t going to keep Caitlin Clark off the court Sunday.

IOWA CITY — When McKenna Warnock took a quick first look at the Iowa women’s basketball schedule, something big stood out.

Readiness is at the forefront of what the University of Iowa men's basketball team hopes to accomplish in Monday’s matchup with Omaha.

The final four: Hawkeyes and Mavericks

Scott Fowler: UNC’s Roy Williams opens up on Jordan, Dean, Duke and why he really retired

Roy Williams, the star of this week’s “Sports Legends of the Carolinas,” is probably a well-known name to you and to most sports fans.

Iowa forward Kris Murray shoots against Seton Hall during the first half of the Hawkeyes' 83-67 road win earlier this month. Murray finished with 29 points in the victory. 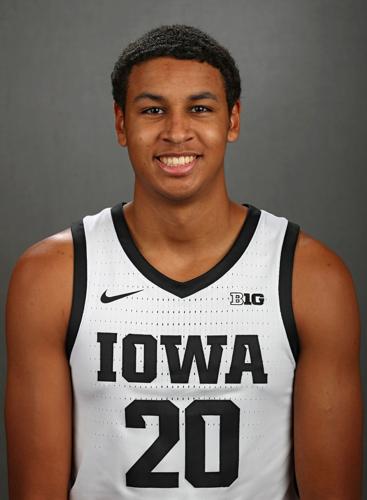