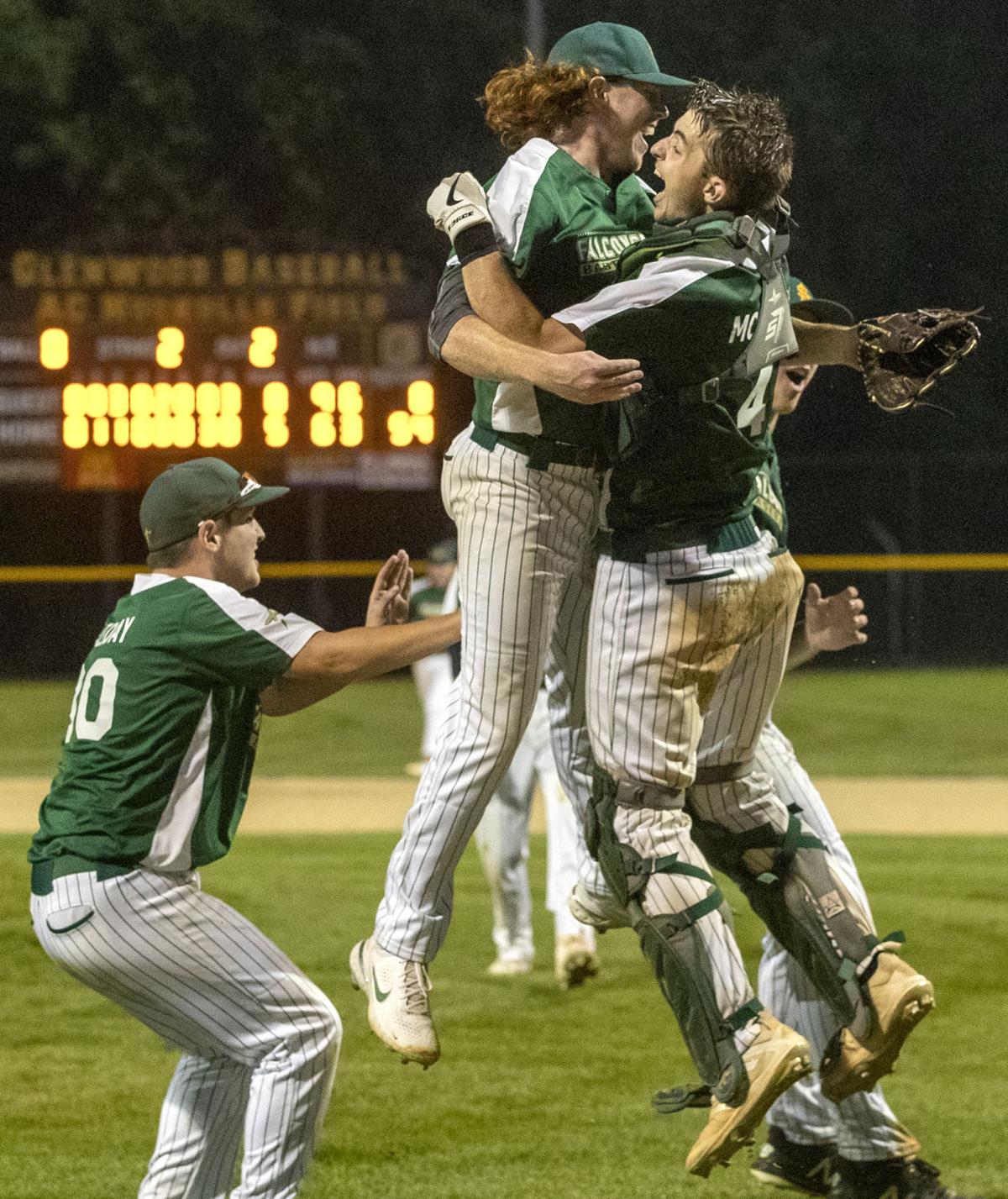 St. Albert’s Dan McGrath (4) hugs pitcher Cy Patterson, at left, in midair after the Falcons defeated CAM 8-5 in eight innings to advance to the Class 1A state baseball tournament on Tuesday. 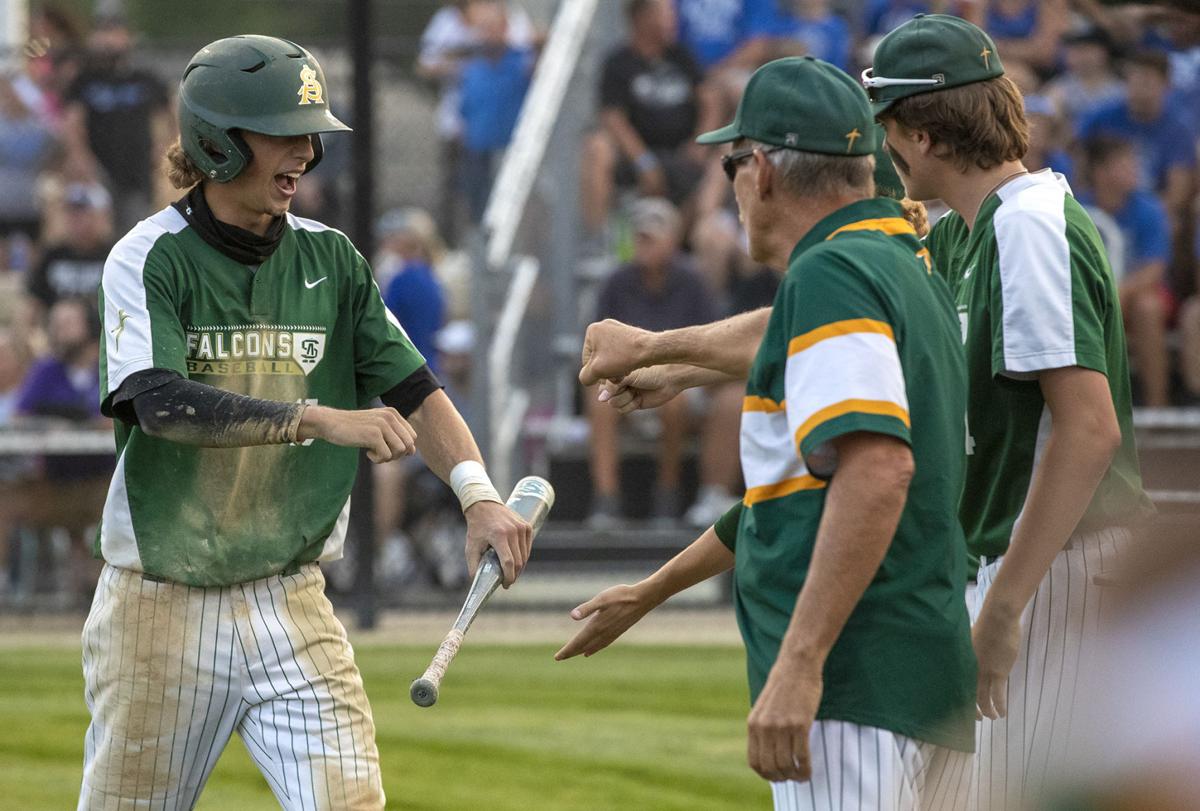 St. Albert’s Isaac Sherrill, left, celebrates with coaches and teammates after scoring during the fifth inning on Tuesday. 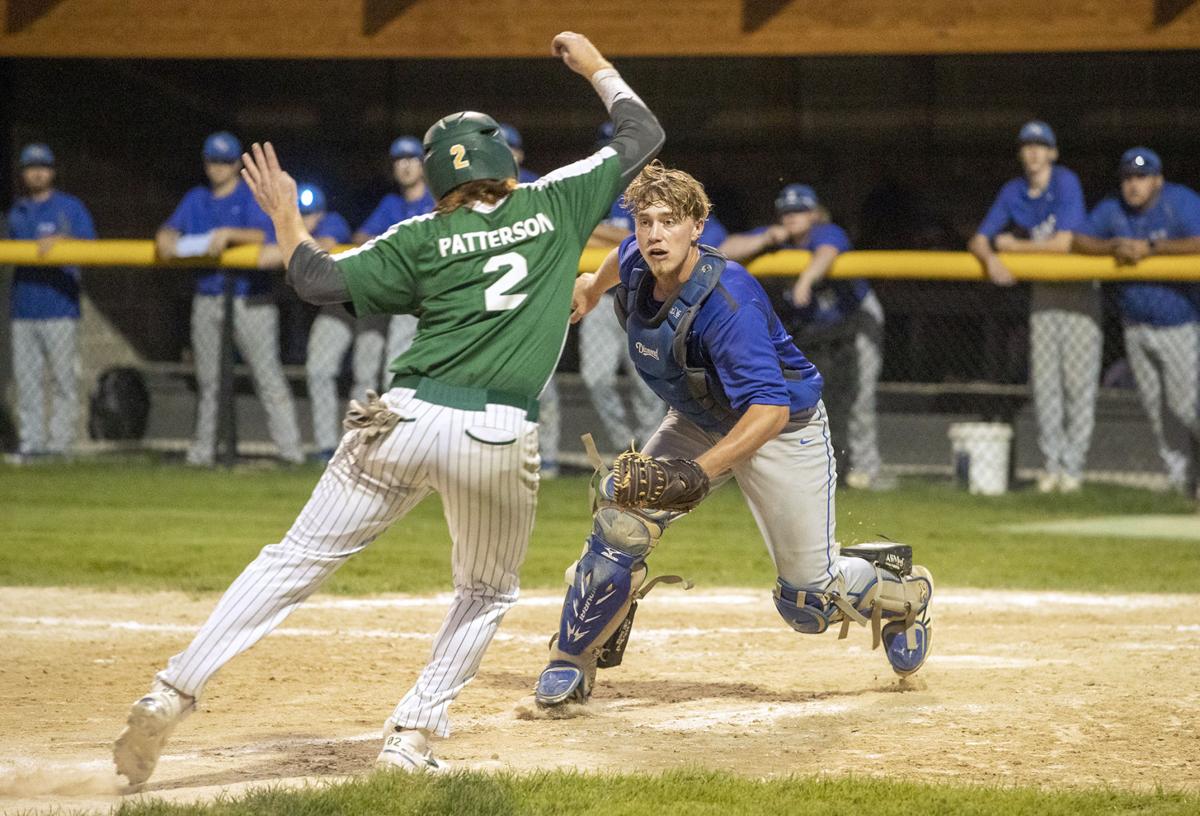 CAM catcher Colby Rich, right, stares down St. Albert’s Cy Patterson (2) as he tries to score during the eighth inning on Tuesday, July 20, 2021. 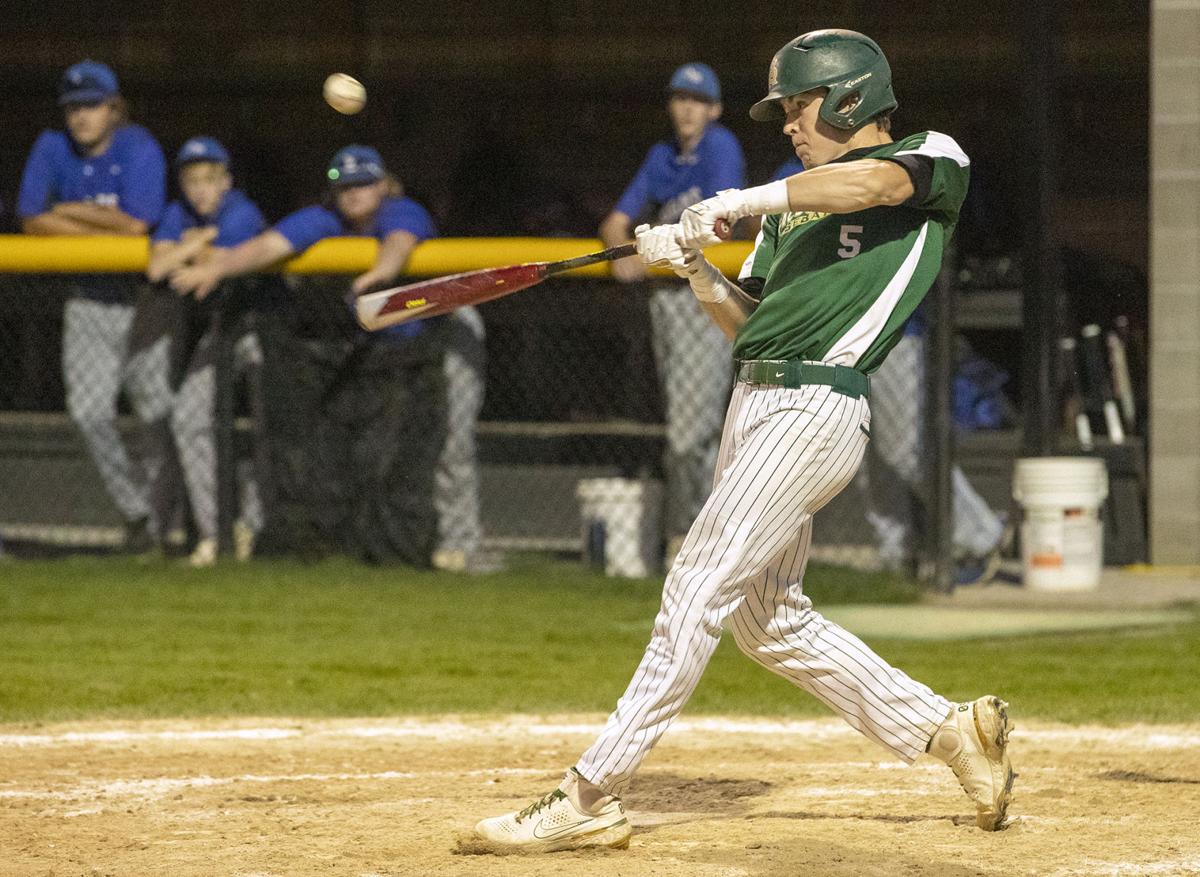 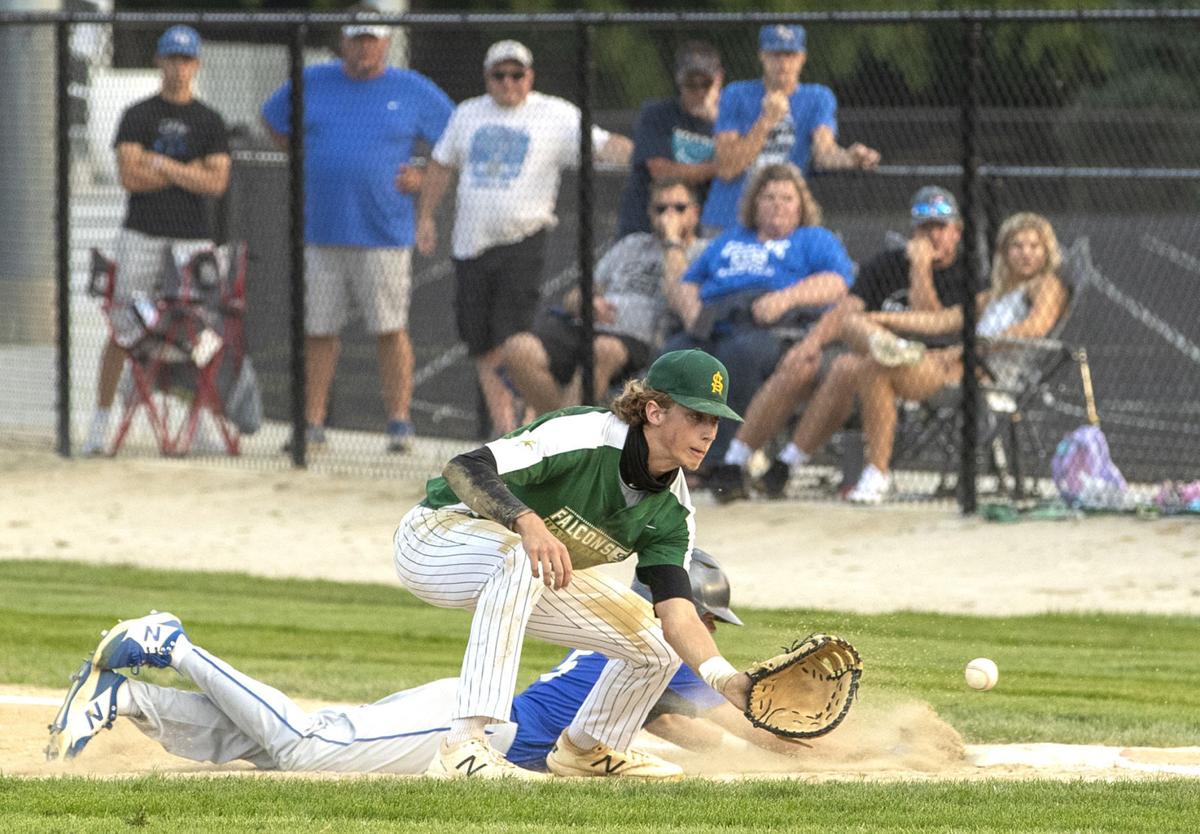 CAM’s Ethan Follmann (5) slides back to first as St. Albert’s Isaac Sherrill, top, waits for the throw during the second inning on Tuesday.


GLENWOOD — It took one more inning than was planned, but Class 1A No. 4 St. Albert baseball earned a spot in its second-straight state tournament, defeating No. 9 CAM, 8-5, in the Class 1A Substate 7 championship on Tuesday night in Glenwood.

CAM took an early lead, scoring once, in the bottom of the second before St. Albert took a 3-2 lead in the third.

The Falcons added a pair in the fifth to stretch the lead to three before CAM rallied to tie the game in the bottom of the seventh.

St. Albert came back one more time to score three in the eighth and hold CAM scoreless in the bottom half of the inning to seal the win.

The Falcons seniors will be making their third trip to state, qualifying as freshmen.

“It’s crazy,” senior Isaac Sherrill said. “Just being able to do this with my boys, a thrilling game, shout out to CAM, they battled. It’s an amazing feeling I can’t describe it.”

Head coach Duncan Patterson said he was proud to see his team battle back twice. He pointed to their toughness as one of the reasons for success this season.

“That’s how it’s been all year,” he said. “Every single game it’s a battle. These guys don’t give up. They expect to win, and that’s something we preach. They’re going to do whatever they can do get that W.”

The Falcons threaten to score in the top of the first, but a base runner was caught stealing, and St. Albert stranded two runners.

The Falcons defense held strong in the bottom of the first, forcing a double play and senior Eric Matthai striking out the last batter.

Freshman Jaxson Lehnen earned the first hit of the game in the top of the second with a one-out single, but the Falcons couldn’t score after a base running mistake allowed for an easy tag out and a runner was caught stealing third.

CAM earned its first hit in the bottom of the second on a lead-off double and scored when CAM sophomore Seth Hensley singled in the first run of the game. The Cougars threaten to add even more runs with bases loaded. But, a flyout ended the scare for the Falcons.

The Cougars started to struggle from the mound in the top of the third, walking two and hitting a batter to load the bases.

CAM switched pitchers, but the struggles continued as a wild pitch on the first pitch plated the first run of the game for St. Albert.

Senior Brett Klusman kept the momentum rolling with a one-out, two-RBI single to give the Falcons a 3-1 lead before the Cougars recorded the final two outs.

The Falcons made a pitching change in the bottom of the third.

Matthai pitched 2 1/3 innings, allowing one run on two hits while striking out one batter and walking one.

Senior Jeff Miller replaced him on the mound.

CAM drew within one in the next at bat after scoring on an error, making the score 3-2 after three innings.

St. Albert and CAM both went three up and three down in the fourth inning.

Sherrill hit a lead-off double in the top of the fifth, CAM intentionally walked Cy Patterson, and a walk loaded the bases, forcing the Cougars to make their second pitching change.

Junior Carter White laid down a sacrifice bunt to score a run, and Lehnen hit a two-out RBI single to give St. Albert a 5-2 lead before a base runner was caught stealing for the third out.

CAM placed one baser runner in the bottom of the fifth but left him stranded.

St. Albert and CAM both failed to place a base runner in the sixth.

Sherrill hit a lead-off single in the seventh, and Monahan laid down a successful bunt with one out, but both were left stranded.

CAM didn’t go out quietly. A quick popout and a strikeout brought the Cougars to the brink, but an error and a two-run home run made the score 5-4 with one out remaining. A solo home run two pitches later tied the game. A flyout ended the seventh, forcing extra innings.

Lehnen advanced to first on a base on balls, Miller hit a one-out single and Brennan laid down a sacrifice bunt to place runners on second and third.

Sherrill blasted a two-out, two-RBI double to give St. Albert a 7-5 lead in the next at bat. Monahan stretched the lead to three with an RBI single.

Sherrill said he expected a curveball might be coming, and his suspicions paid off in a big way.

“This is exactly what we had prepped for coming into this, lots of hitting,” he said. “We knew exactly what we were looking for. We had gotten an idea of their pitch sequencing. So, I was sitting curveball, and I got it and I hit it hard.

“… That feeling is indescribable. I’m just so happy to do this for my boys and my family and for everybody that supports us it’s a great feeling.”

A popout earned the first out in the top of the seventh and the Falcons made a pitching change after a walk.

Miller pitched five innings, allowing three runs, two of which were earned, on four hits while striking out four and walking one.

Cy Patterson, who was intentionally walked four times, came in to finish the final two outs of the ball game.

“It felt great to actually contribute to the team today,” he said. “The team always picks each other up. … It’s a great feeling to see the last out get caught and then we can go celebrate.”

The state tournament begins Monday in Carroll. St. Albert will find out its opponent and time today.

“We’ve had a lot of expectations this year from the school, from 1A, from outside forces, and to battle like that, they keep staying in every single game,” Duncan Patterson said. “They won’t give up, and that’s a credit to them and a credit to their family. That’s how they were raised. They’re going to get after it.”

The boys of fall: 2021 football schedules

Football season is upon us once again.

Olympic moment: Record-setting 400-meter hurdles final is being called the greatest race ever

The race produced a world record, a masterpiece and slice of history. It might have been one of the best races ever run. Here's why.

US swimmer Andrew goes maskless behind scenes at Olympics

Michael Andrew, who made waves for saying he wasn't vaccinated against COVID-19, didn't wear a mask behind the scenes after swimming his final.

Why Olympians bite their medals and what they do with them

The sight of a jubilant Olympian standing atop the podium after being victorious in their discipline with a gold medal between their teeth is an iconic one. But why?

St. Albert’s Dan McGrath (4) hugs pitcher Cy Patterson, at left, in midair after the Falcons defeated CAM 8-5 in eight innings to advance to the Class 1A state baseball tournament on Tuesday.

St. Albert’s Isaac Sherrill, left, celebrates with coaches and teammates after scoring during the fifth inning on Tuesday.

CAM catcher Colby Rich, right, stares down St. Albert’s Cy Patterson (2) as he tries to score during the eighth inning on Tuesday, July 20, 2021.

CAM’s Ethan Follmann (5) slides back to first as St. Albert’s Isaac Sherrill, top, waits for the throw during the second inning on Tuesday.