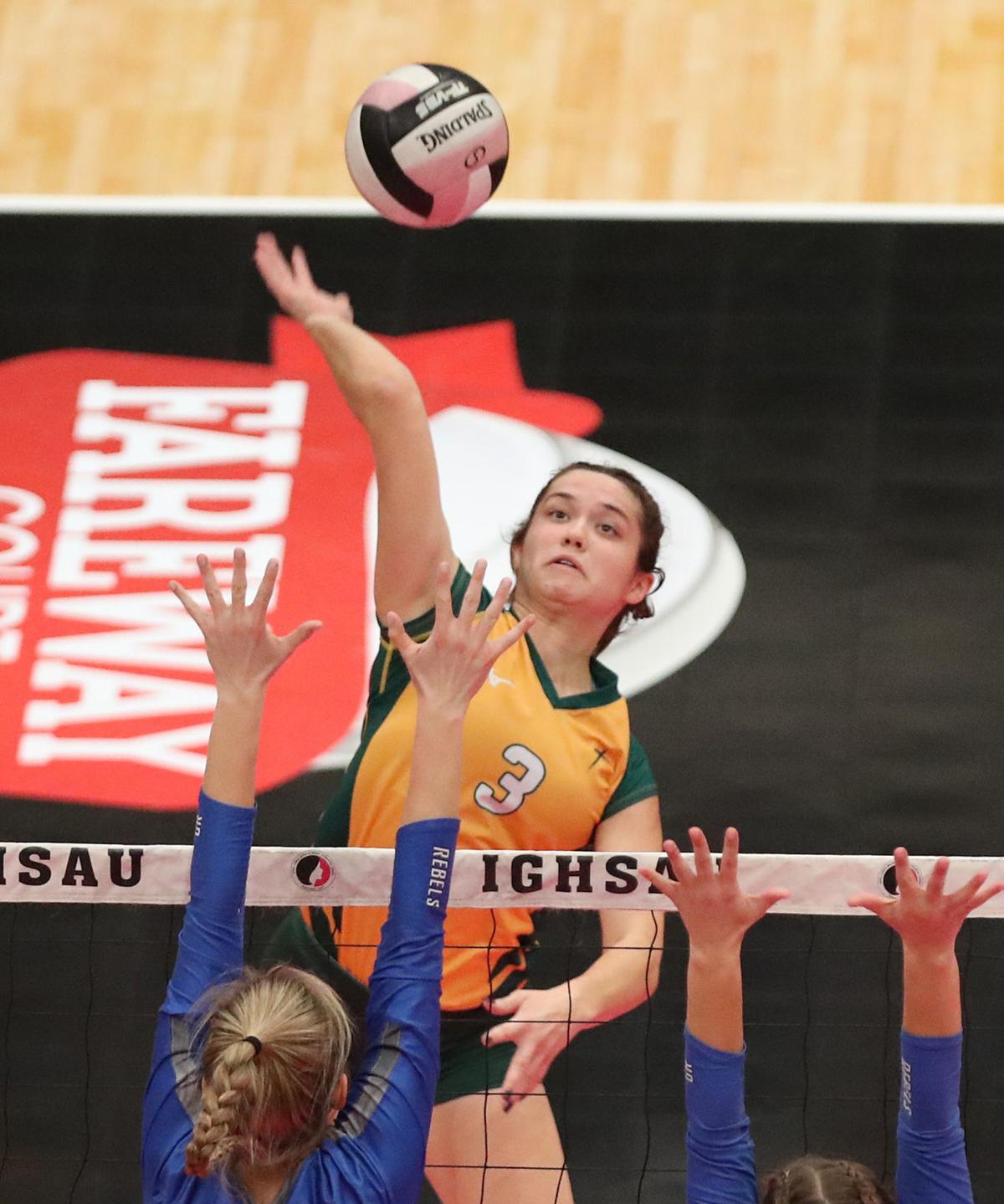 St. Albert’s Allie Petry swings against Gladbrook-Reinbeck in the Class 1A state volleyball tournament semifinals on Nov. 4, 2020, at the Alliant Energy Power House in Cedar Rapids. 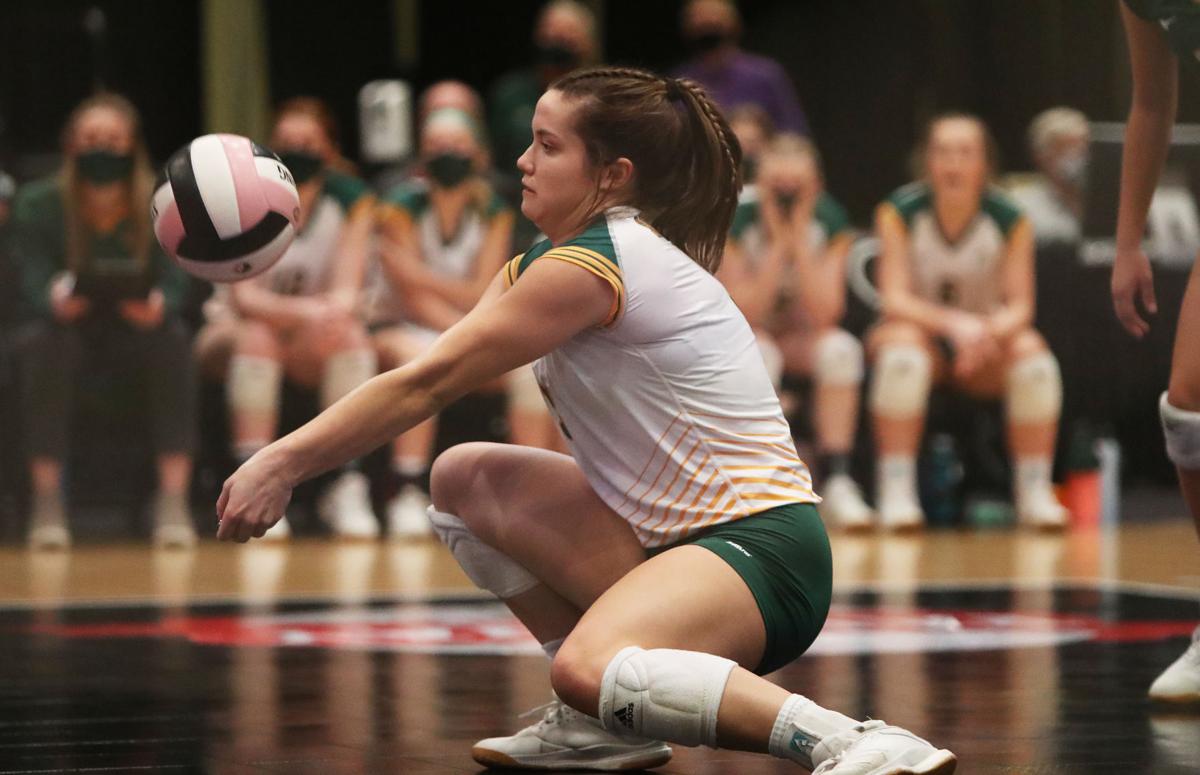 Allie Petry of St. Albert plays a ball against Janesville on Nov. 3, 2020, at Alliant Energy PowerHouse, in Cedar Rapids. 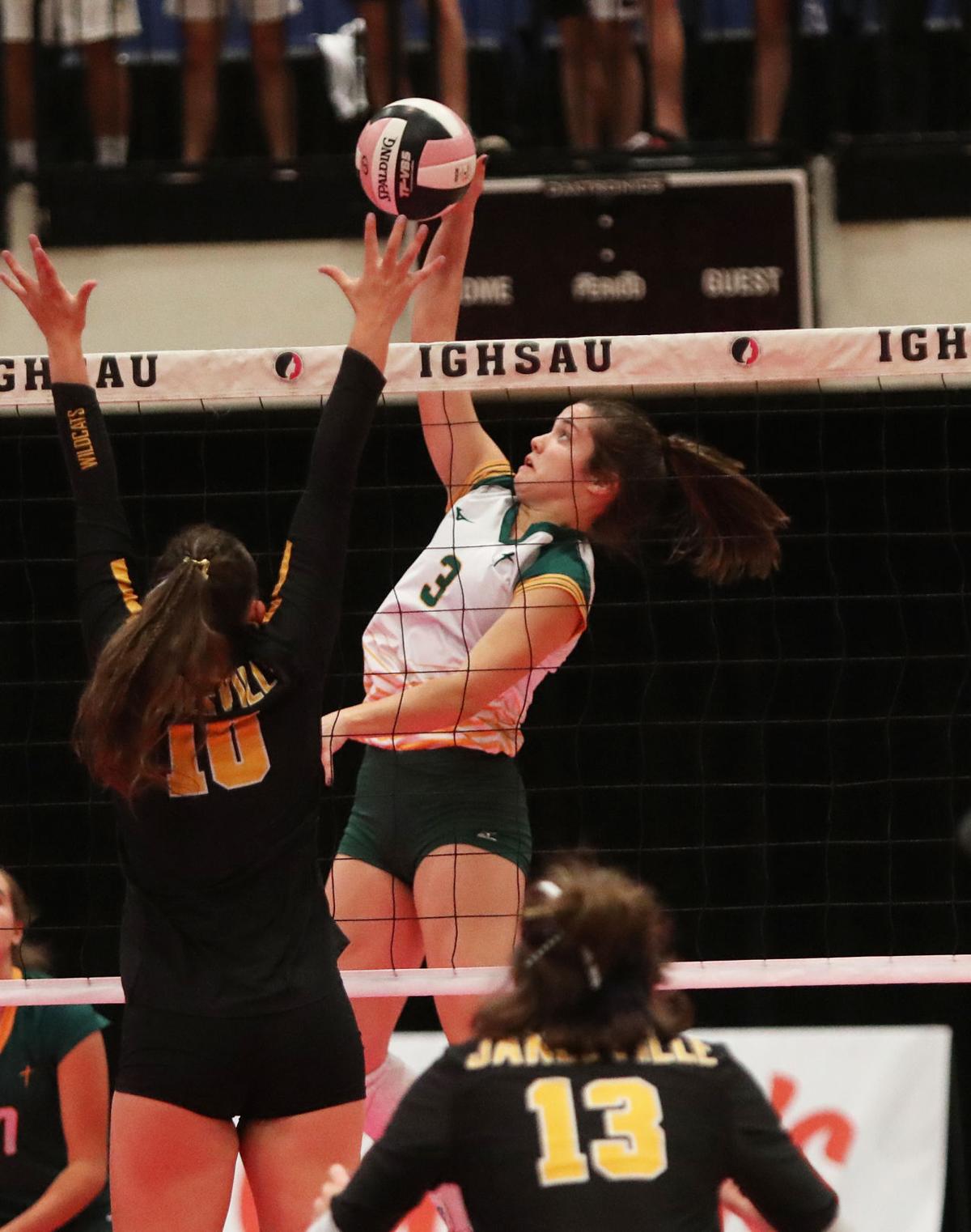 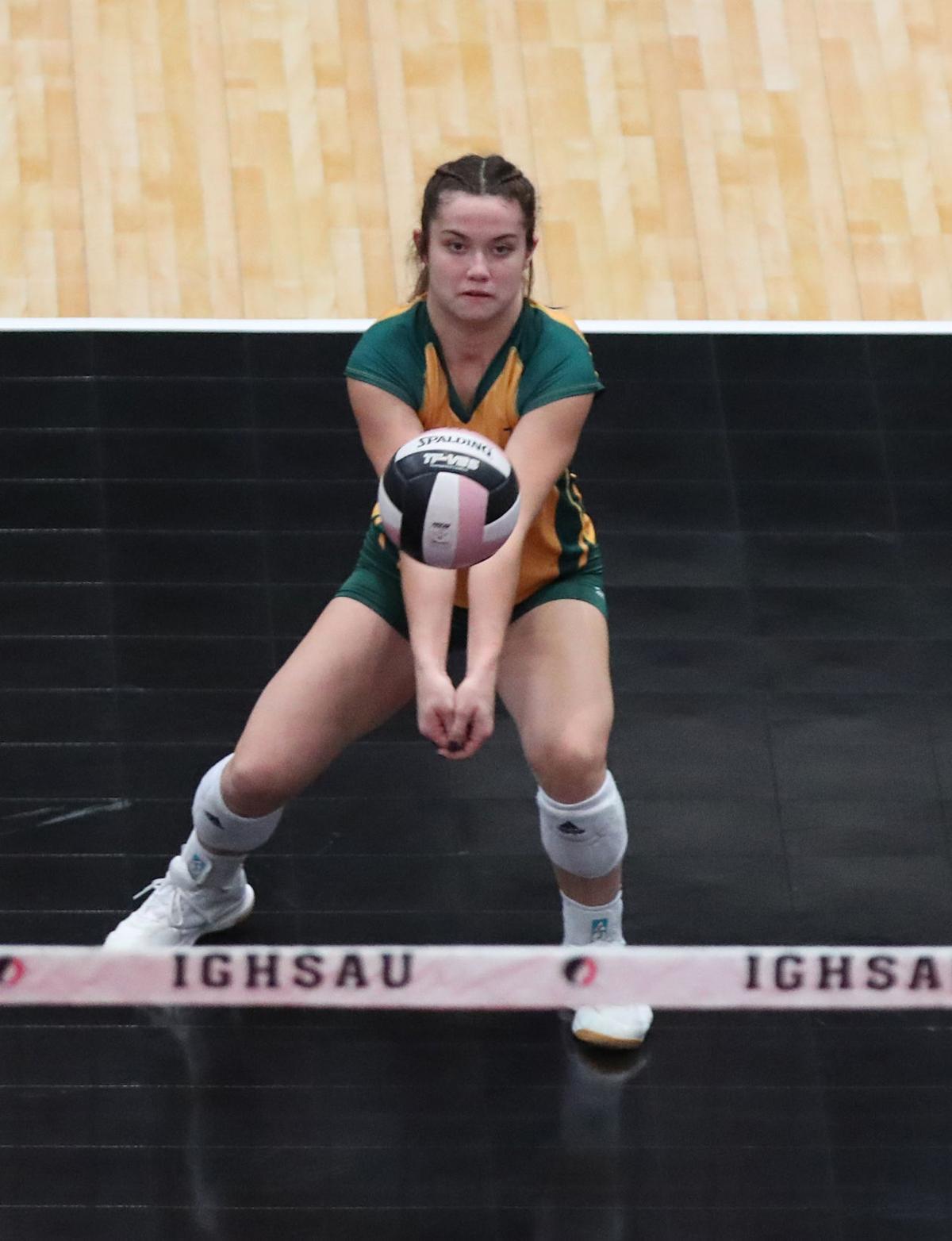 
St. Albert’s Allie Petry capped off a stellar prep volleyball career by helping lead the Saintes to the state semifinals, while also being named Class 1A first-team all-state and the 1A player of the year by the Iowa Girls Coaches Association.

Having played the game of volleyball since grade school, now seeing it lead to being called one of the best in the state is the ultimate payoff for Petry.

“I knew that our class had a lot of great players,” Petry said. “It made it really nice to be seen as the best in our class when there’s so many other great players that could have won it too.”

Her coach, Angie Lantz, is also thrilled as she says the award is a testament to Petry’s commitment and work ethic.

“It’s such a testament of the time and effort that she’s put in over the years,” Lantz said. “She is an all-around athlete, she plays so many other sports and she’s always been committed to becoming a better player.”

“I have had the opportunity to coach her since she was 13 with our club team,” Lantz said. “I’ve been able to watch Allie grow and develop for a long time now and it’s really great to see all of her effort in this sport pay off.”

Petry’s love for the game has been a driving force in her success.

“She just always had a true love for this game. She has for a long time and it’s evident when she plays,” Lantz said. “If anyone has ever seen her play, they know she’s always got a smile on her face and she is a true competitor.”

For Petry it’s also been nice to work with Lantz for so long, as she not only taught her how be a great player physically, but also how to think like a great player.

“I was kind of a head case and had a bad attitude and all of that, ” Petry said. “Coach (Lantz) really helped me come out of that and led me in the right direction after that first year. After that, my game just really took off and she’s been such a great help since to keep me on track and keep it to where I’m having fun on the court. She’s been a very good coach and has really helped me develop my game so much.”

Being one of the team’s two seniors, Petry led the team in many ways.

One way was in kills as she finished her season with 392. She also led the team by example in other ways, including by just having fun playing the game.

“I always tell others if you have fun on the court, you’re going to play your best,” Petry said. “Whatever game it is, just always have fun and do what you can do.”

Petry will continue her academic and athletic career at Iowa State as a preferred walk-on. Petry looks forward to extending her volleyball career as a Cyclone, and she’s just as eager to get started in studying kinesiology.

After an injury cut her freshman year short, Petry knew she wanted to pursue a major that would not only keep her in sports for a long time, but also a career that helped athletes recover from injuries to keep them playing the sports they love.

“I’m thinking of something like exercise sciences or athletic training,” Petry said. “I know I just want to be in the sports world for as long as I can be. I feel like I understand an athletic mind really well. I’ve been playing sports since I was really little and I feel like I have a lot that I can contribute to a team or a player, or even someone who’s coming off an injury, since I had one myself.”

Her own personal experience has helped Petry gain understanding of what athletes go through when rehabilitating an injury.

“I really feel like I can help and relate to people in that regard,” she said. “Some people don’t know how to deal with injuries. I know it was hard for me to learn how to come back from mine, but my physical therapist did a really good job, and after going through that, I feel like I can do that as well.”

While she looks forward to her future endeavors, she’ll not soon forget what it meant to play at St. Albert.

“St. Albert is truly a different environment,” Petry said. “It’s been truly awesome and coach Lantz has just made it so great over these past four years. She has created a great environment for everyone and I hope that people that come into the high school program help continue that.”

> Look for this year’s all-city volleyball team and honorable mention selections in Wednesday’s edition of the Daily Nonpareil.

The NFL announced that 7,500 health care workers vaccinated for the coronavirus will be given free tickets to next month's Super Bowl in Tampa.

A late third-quarter run gave AHSTW the cushion it needed in a 64-56 girls basketball win against St. Albert Monday night in Council Bluffs.

An early arrival has given Bailey Ortega a significant opportunity at the beginning of a late-starting Iowa volleyball season.

West hits late free throws to get past TJ boys

Sioux City West hit its free throws down the stretch to hold off Thomas Jefferson 68-59 in a boys basketball game Monday night at the T.J. Ath…

St. Albert’s Allie Petry swings against Gladbrook-Reinbeck in the Class 1A state volleyball tournament semifinals on Nov. 4, 2020, at the Alliant Energy Power House in Cedar Rapids.

Allie Petry of St. Albert plays a ball against Janesville on Nov. 3, 2020, at Alliant Energy PowerHouse, in Cedar Rapids.