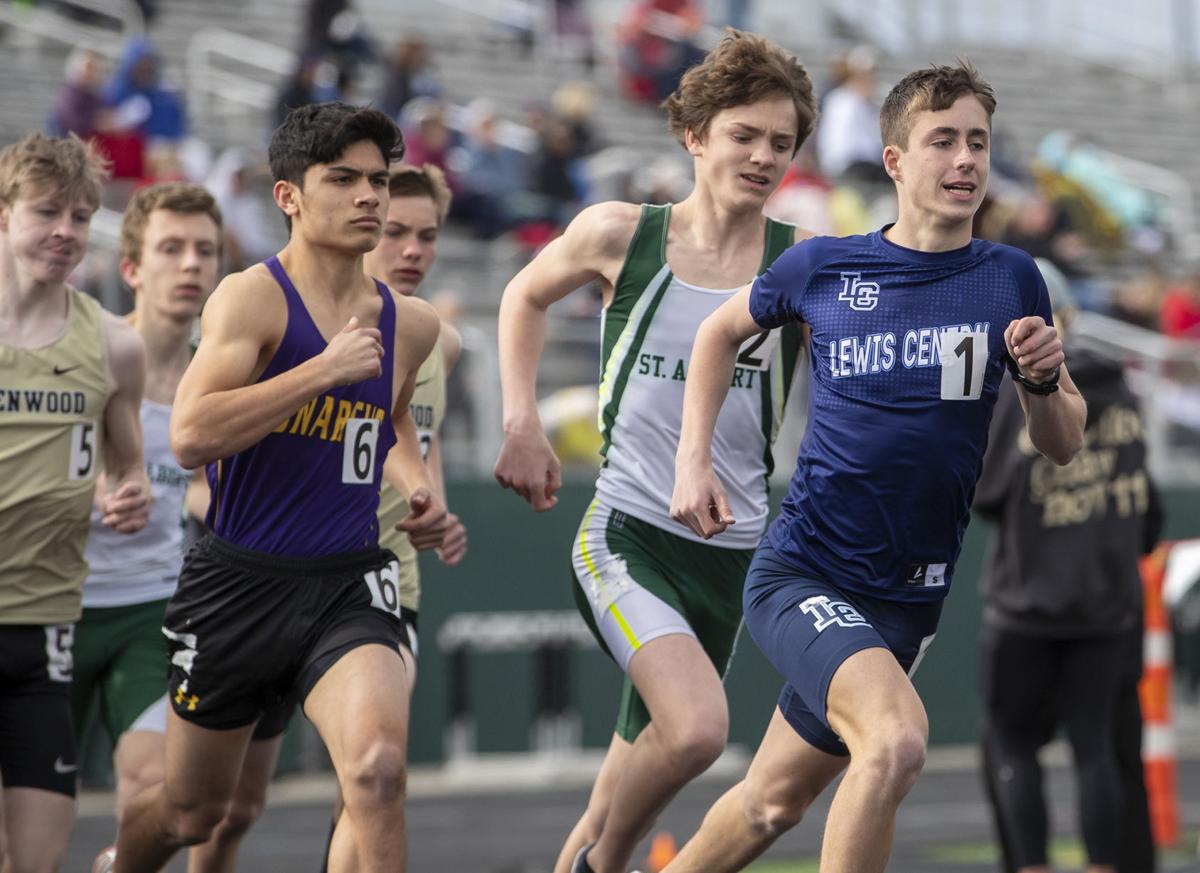 Lewis Central’s Ethan Eichhorn, right, and St. Albert’s Colin Lillie, at left, lead the pack during the start of the 3,200-meter run in the Council Bluffs Boys Invite at Wickersham Stadium on Thursday, April 15, 2021. 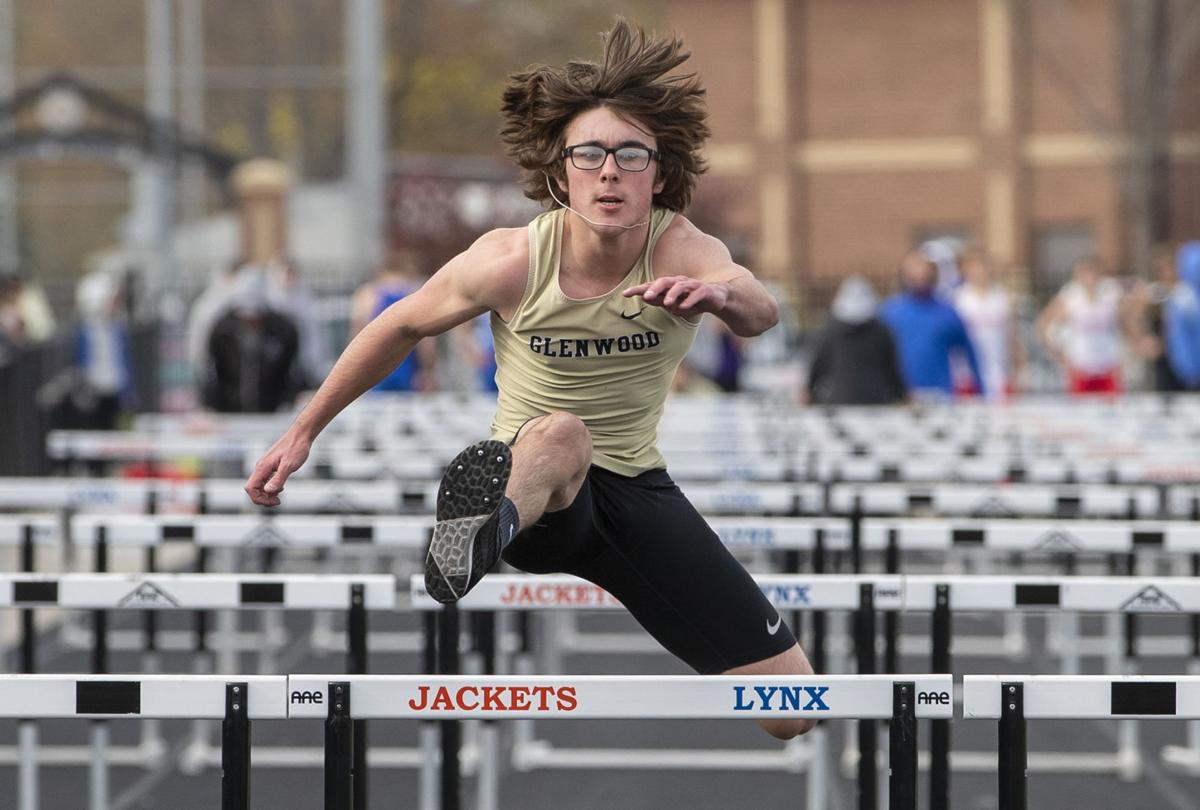 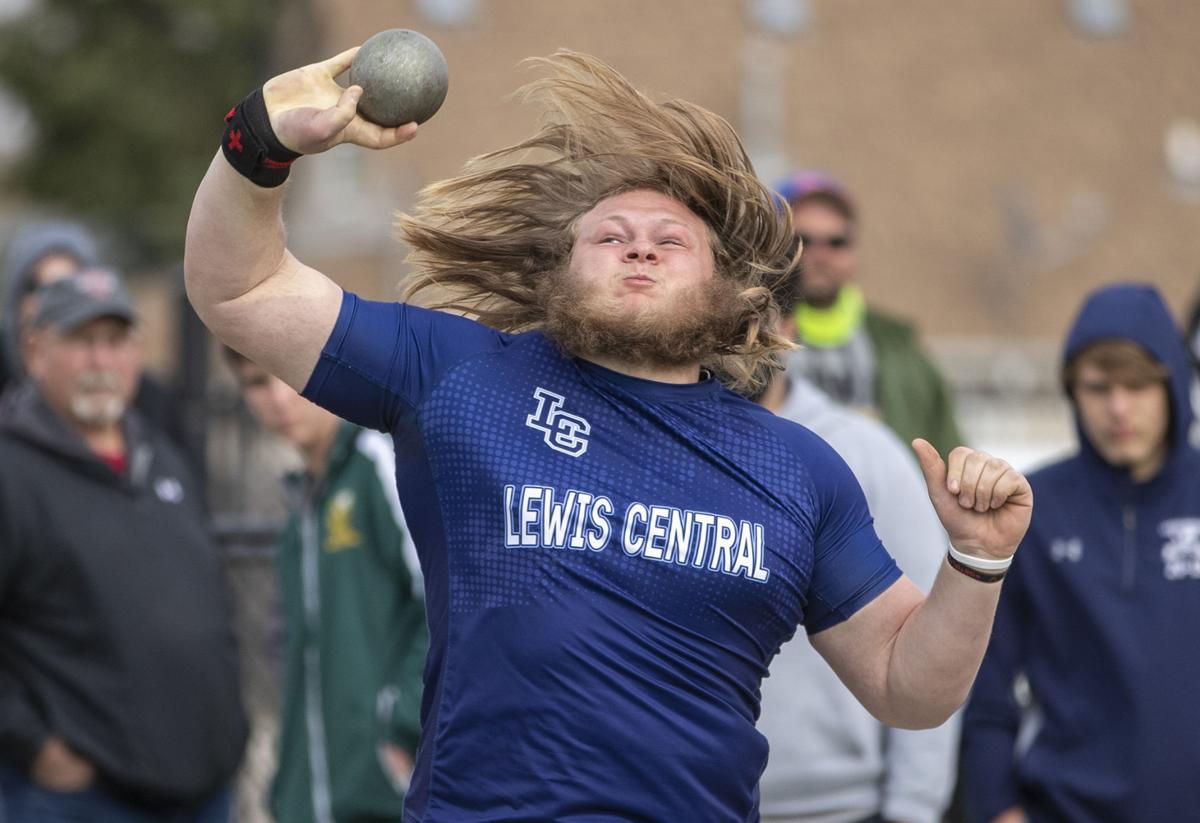 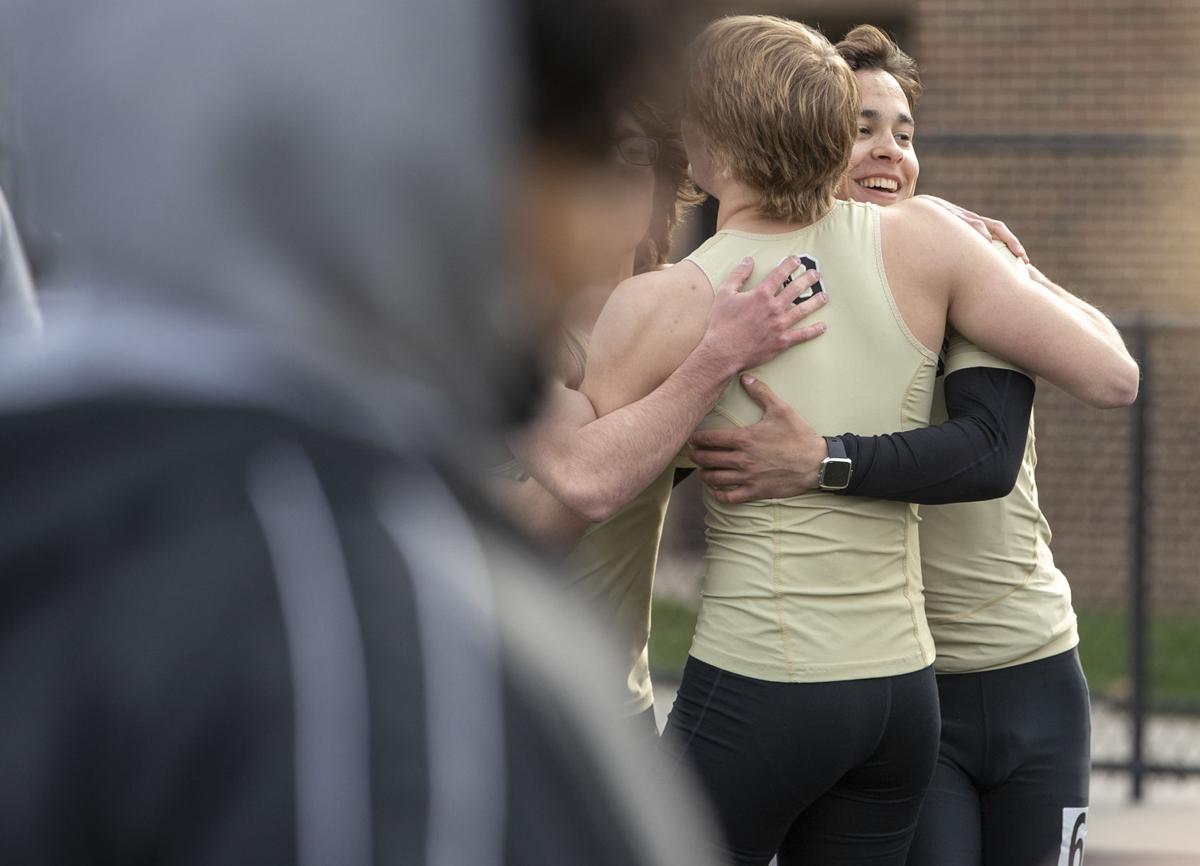 Glenwood’s Tyler Boldra, right, gets a hug from a teammate after winning the 4x110-meter shuttle hurdle relay during the Council Bluffs Boys Invite at Wickersham Stadium on Thursday, April 15, 2021. 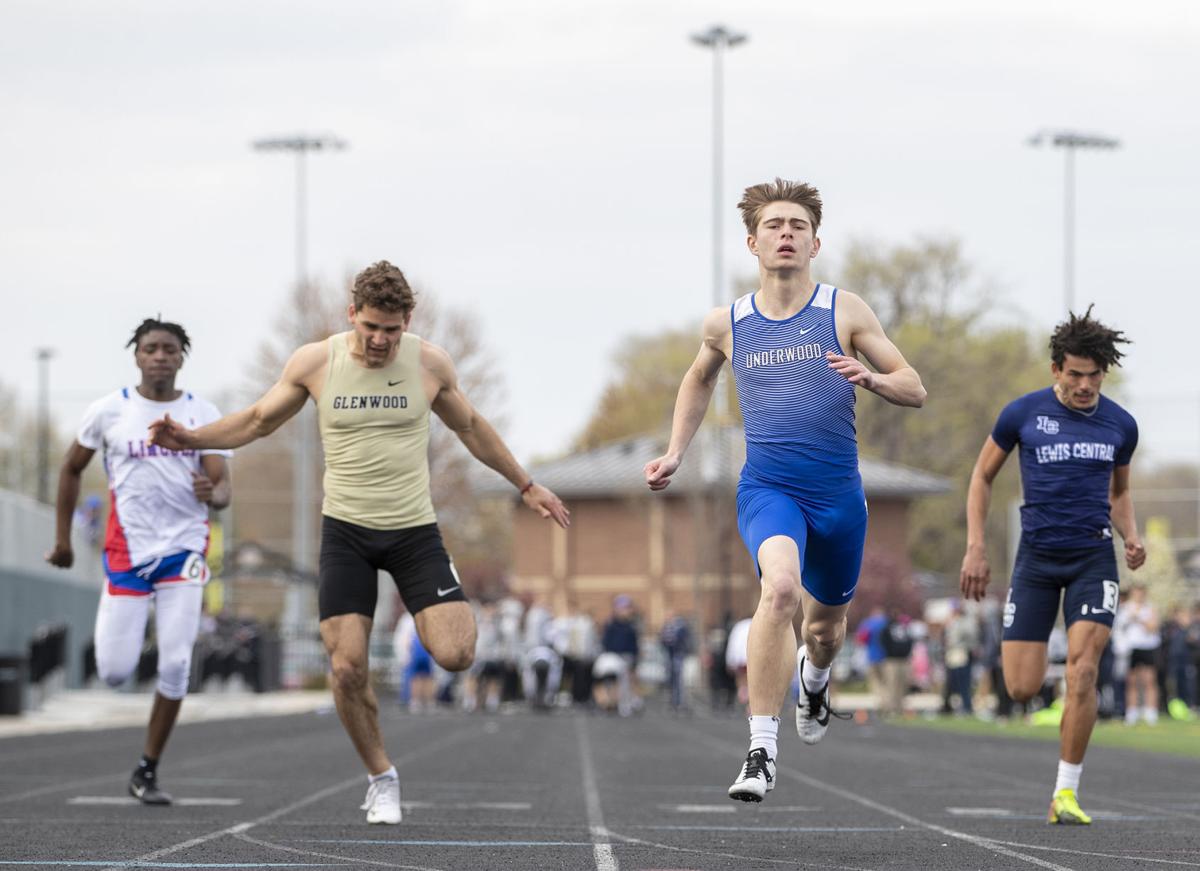 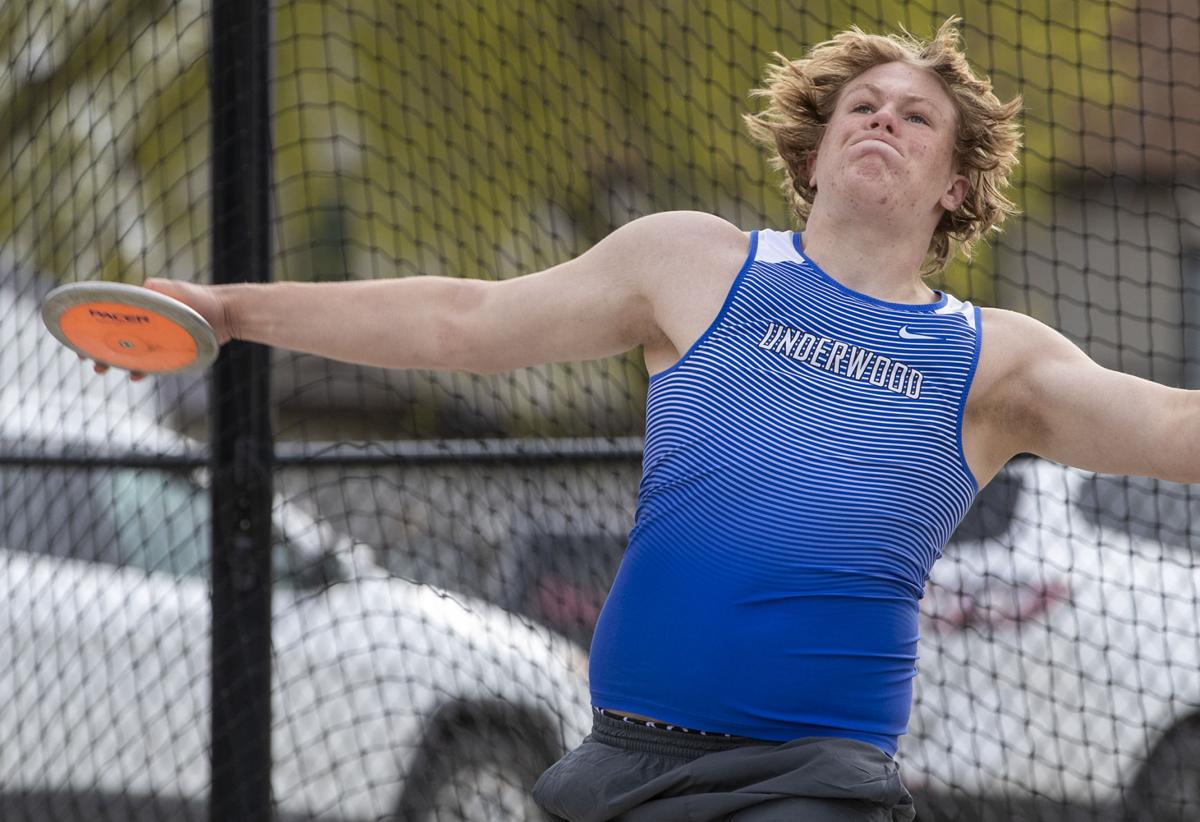 Underwood’s Thomas Huneke competes in the discus event during the Council Bluffs Boys Invite at Wickersham Stadium on Thursday, April 15, 2021.

Lewis Central freshman Ethan Eichhorn came into Thursday’s Council Bluff Boys Invite with the goal of running a 9:35 in the 3200 to qualify for the Drake Relays.

Eichhorn fell just short of that goal, but was rewarded with breaking the 10-minute two mile for his effort with a time of 9:57.26.

“It feels really good. I came a little short of Drake, which was the goal but I still broke 10 so I’m pretty happy about that,” he said.

Eichhorn hopes to only keep improving on his time and hopes to get down to 9:50 by the end of the season.

“It’s huge because now I know I can do it,” he said. “I’ll just keep on going and keep doing it.”

Eichhorn was 37 seconds faster than the second-place finisher. So with no competitors to push his pace, Eichhorn and his coach had to come up with a strategy.

“This being the last day of Drake qualifying, me and my coach came up with splits and we were going for Drake for the first five or four laps. If I died, I died because I knew coming in I should most likely win this.”

“I’m really proud of him for showing guys and going after a time that was tough to hit,” he said.

Eichhorn was one of many L.C. athletes to claim gold medals.

“I thought we had a good night overall,” Argotsinger said. “We stacked up a couple relays that we thought maybe had a chance at Drake and did pretty well on those. Even as a team we did pretty solid as well. I was happy with that.”

St. Albert senior Greg Fagan showed his strength in the shotput with a throw of 48 feet, 2.5 inches to take first.

Falcon sophomore Colin Lillie finished second in the 3200 and was 17 seconds faster than the third-place finisher.

“(Fagan has) been doing really well,” St. Albert head coach Russ Sindelar said. “He’s just advancing every meet by two feet, three feet in the shot put. Today he came out on top. Greg is just a very solid competitor. He’s a very coachable kid, he’s got excellent form in everything he does.”

Thomas Jefferson had some success as well, with its sprint medley placing seventh and sixth in the 800 relay.

“Our kids run hard,” T.J. head coach Bob Nielsen said. “They just happen to be running against people a little faster. Our kids ran hard tonight. That’s all I can ask.”

“It was a little bit of up and down,” A.L. head coach John Wolfe said. “We saw some impressments in a few areas and obviously not in some others. Overall I think we did well and we’re just continuing to see some progress and that’s kind of what we’re after.”

The highlight of the meet for the Lynx was the 800 relay, which dropped four seconds and placed fifth with a time of 1:37.79.

The final chapter had been written on a highly successful Abraham Lincoln boys basketball season.

For four years St. Albert girls basketball coach Dick Wettengel has had a courtside view of the brilliance of senior Allie Petry.

The Class 2A No. 2 Lewis Central girls soccer team got a goal with just under eight minutes left to beat Class 2A No. 11 Glenwood 3-2 at Titan…

For years, the girls state tournament has run during the first weekend of March, and the boys played the following week.

Abraham Lincoln started strong at their co-hosted meet with Thomas Jefferson at Gale Wickersham Athletic Complex, as the Lynx stormed out to m…

The Hughes family shined bright at Glenwood’s home track invitational on Thursday with a trio of sisters, Abby, Emma and Lauren, leading the R…

Lewis Central’s Ethan Eichhorn, right, and St. Albert’s Colin Lillie, at left, lead the pack during the start of the 3,200-meter run in the Council Bluffs Boys Invite at Wickersham Stadium on Thursday, April 15, 2021.

Glenwood’s Tyler Boldra, right, gets a hug from a teammate after winning the 4x110-meter shuttle hurdle relay during the Council Bluffs Boys Invite at Wickersham Stadium on Thursday, April 15, 2021.

Underwood’s Thomas Huneke competes in the discus event during the Council Bluffs Boys Invite at Wickersham Stadium on Thursday, April 15, 2021.