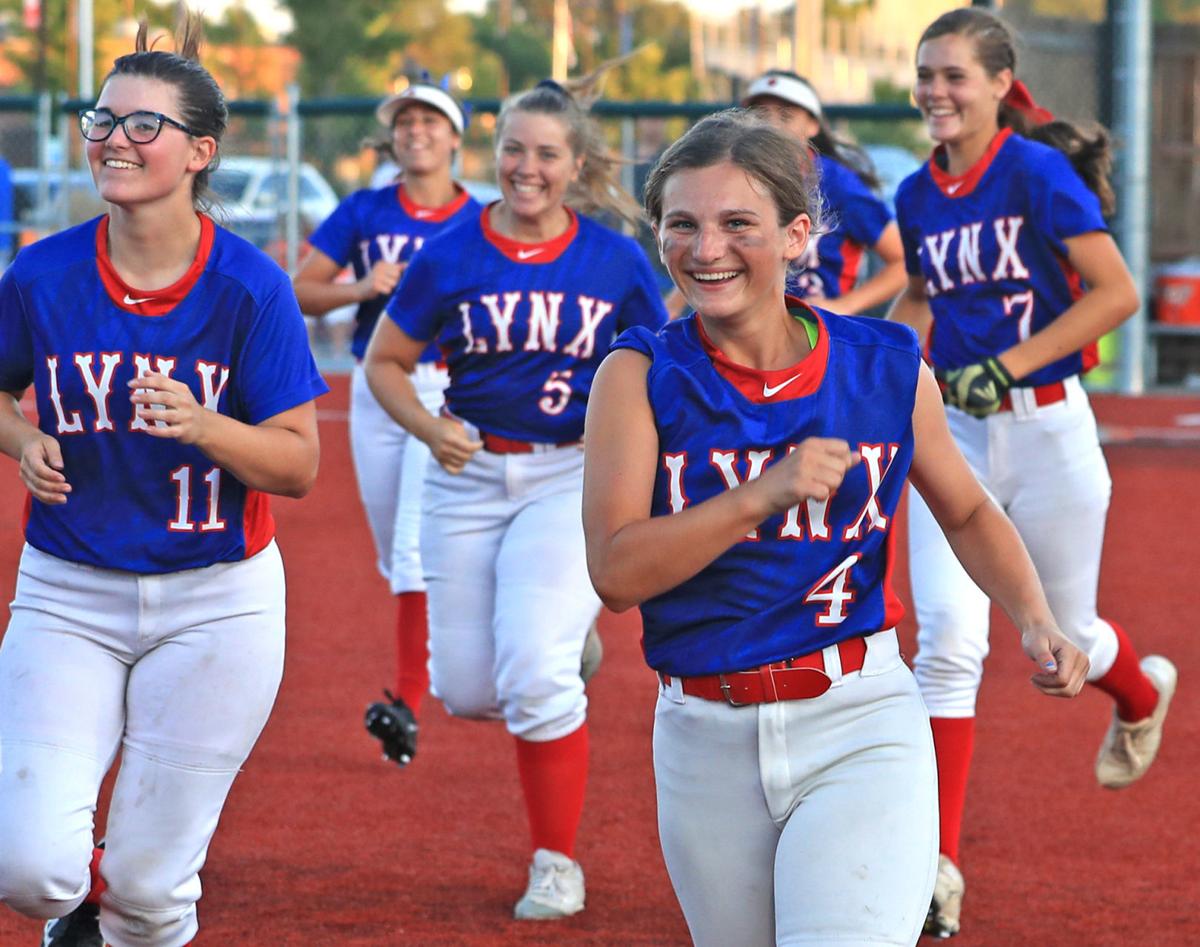 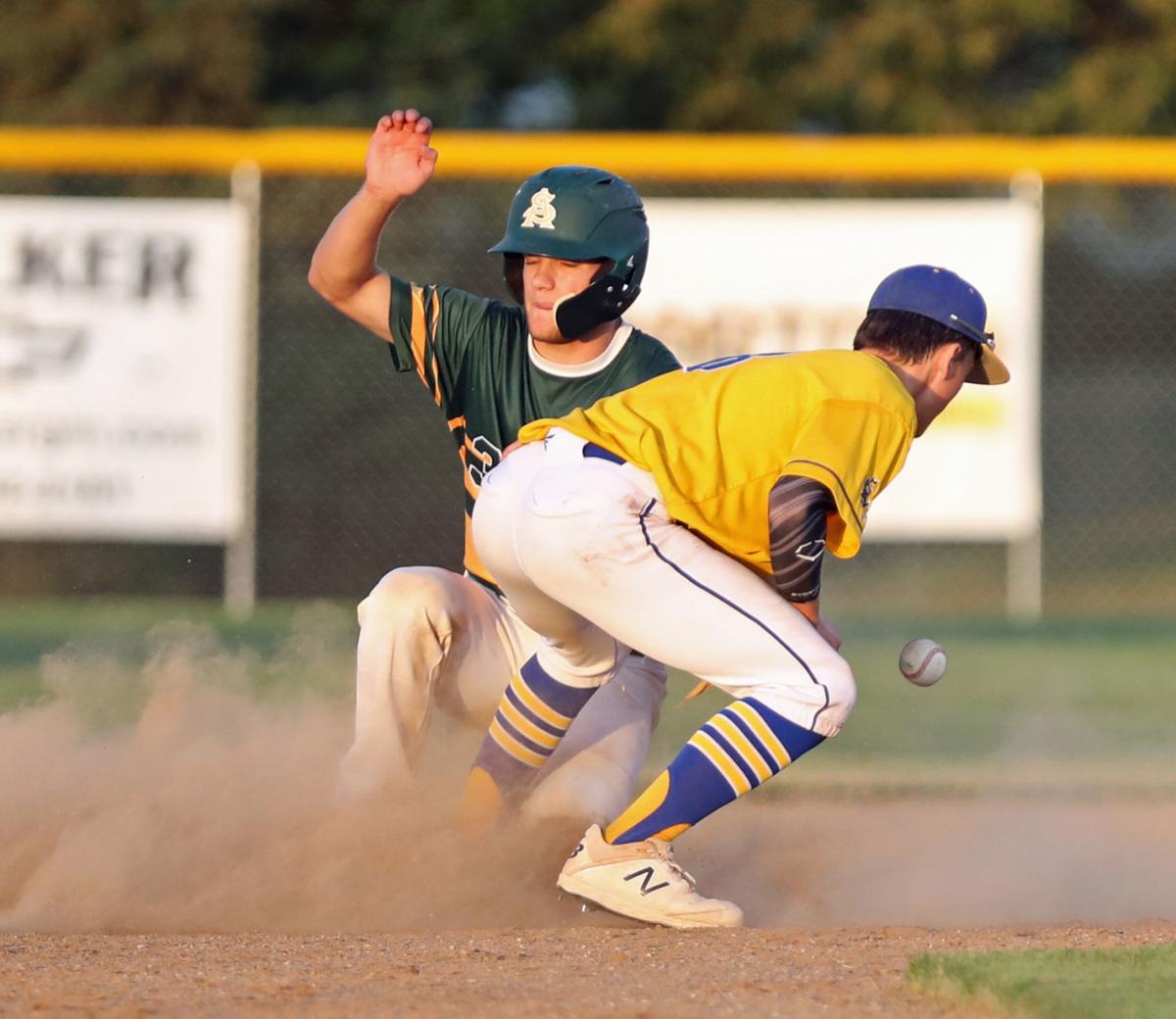 St. Albert's Lance Wright is safe at second in the fifth inning.

The ping of a bat connecting to a ball will soon be heard in Council Bluffs.

Prep athletics will return with baseball and softball. Practices are set to begin June 1, games can start June 15 and fans will be permitted.

On Wednesday, Iowa Gov. Kim Reynolds during her daily press conference gave the go-ahead for summer sports to resume across the state on the first of next month.

“High school athletics was the logical place to start the process of bringing athletics back in season,” Reynolds said. “We’re working closely with the Iowa High School Athletic Association and others to make this possible. Together with the Department of Public Health, we’re also working with youth sports organizations to develop a plan to bring other sports opportunities back for the summer, and more will be coming on that next week.”

IHSAA executive director Tom Keating thanked “all who have worked diligently to develop these guidelines to help us conduct a baseball season for the young people in Iowa.”

He added, “We trust that our administrators, coaches, umpires and fans will responsibly follow the guidelines in place to keep themselves and each other safe. This is terrific news and is a step toward getting our student-athletes reconnected to the activities that mean so much to them.”

IGHSAU executive director Jean Berger added: “The guidelines laid out by the Department of Education and the Department of Public Health will enable us to safely move forward with a softball season this summer. We are grateful for their leadership and support.

“We know the games will have different circumstances and that we will all have to work together to keep everyone safe, but we are confident that we are up to this challenge.”

The IGHSAU and IHSAA plan to offer more sport-specific guidance early next week. Each plans to conduct state tournaments at previously announced venues, with the state softball tournament at Harlan Rogers Sports Complex in Fort Dodge and the state baseball tournament at Principal Park in Des Moines.

Wednesday’s ruling creates hope and excitement for student-athletes. The COVID-19 threat canceled spring sports. No competition has taken place since the conclusion of the boys state basketball tournament in early March, and in order to get back to competition, plenty of work remains for school administrators and coaches, according to activity directors around the Bluffs.

“On the outside, it’s great news for our kids,” Abraham Lincoln Athletic Director Jeff Novotny said. “They have been put through a lot of things like we all have. School was taken away. Hanging out with friends was taken away. Spring sports were taken away. Prom was taken away. This is a step — as long as it’s a safe step — in the right direction. It’s back to some normalcy.

“But with that said, I encourage everyone to be patient. My phone is blowing up from questions like, ‘I want to work this game,’ to ‘When are we starting practice?’ There’s going to be a lot on A.D.’s and coaches’ plates in the next eight days to get organized and make sure it’s safe. That’s our first priority, making sure practices and games are safe not only for players but for umpires, fans and workers. There’s a lot of work to be done.”

“It provides some hope, and it’s good to hear,” he said. “We didn’t expect to hear anything until June 1, so it’s nice that it appears there’s been some communication between the governor, the associations and the Department of Education. They’ve had some good conversations here probably this week.

“Just reading some guidance as far as re-opening, there are still a lot of questions. There’s still some additional guidance, it appears, that will be provided by the boys athletic association and the girls union.”

St. Albert's Ken Schreiber was thrilled for the summer athletes.

“I feel really good for our baseball and softball players,” he said. “It sounds like it could be a great situation for them to get an opportunity to potentially play their season. It’s going to be a lot of work for everybody to go along with the guidelines they’ll probably set up, but I think it’s doable and that the kids and the coaches will be very happy.”

“It’s an exciting moment for the students to have a chance to get out there and play,” he said. “It would be nice to resume a level of normalcy. We’re looking forward to the guidelines and policies and precautionary steps that the state outlines for us to follow just to ensure the safety of everyone involved, from bus drivers, to students, to coaches to officials and everybody involved.”

St. Albert's Lance Wright is safe at second in the fifth inning.