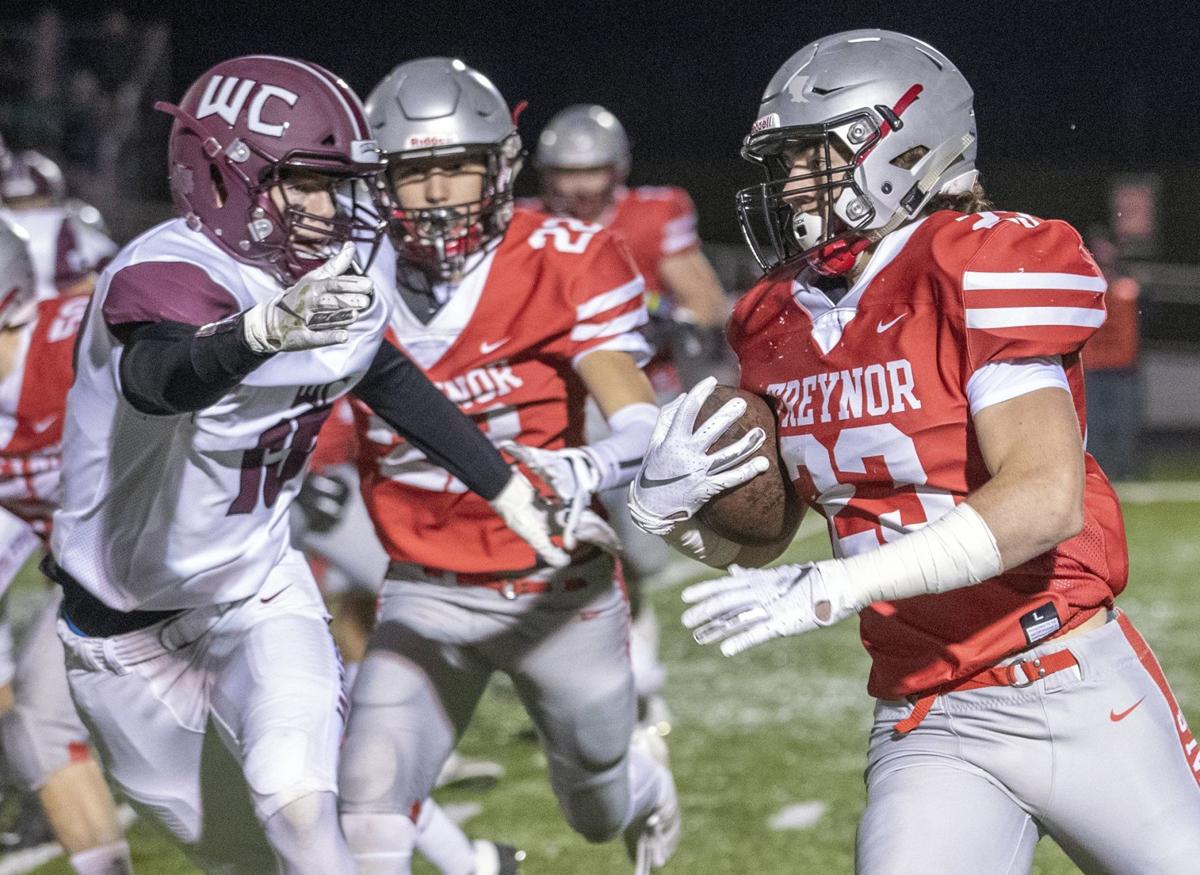 Treynor’s Jack Tiarks (23) is pursued by Western Christian’s Shawn DeWit (15) as he rushes the ball during the first quarter on Friday, Nov. 1, 2019. 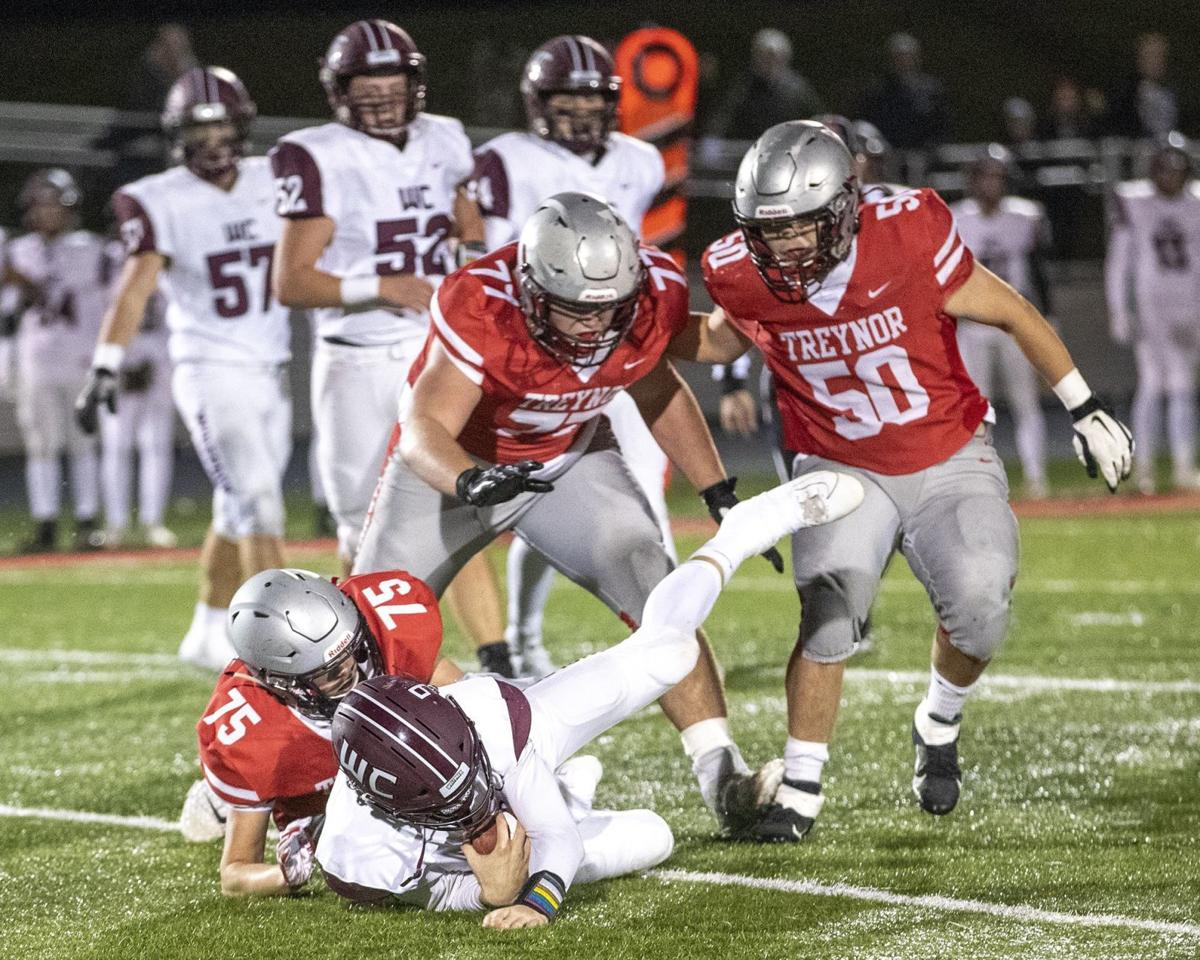 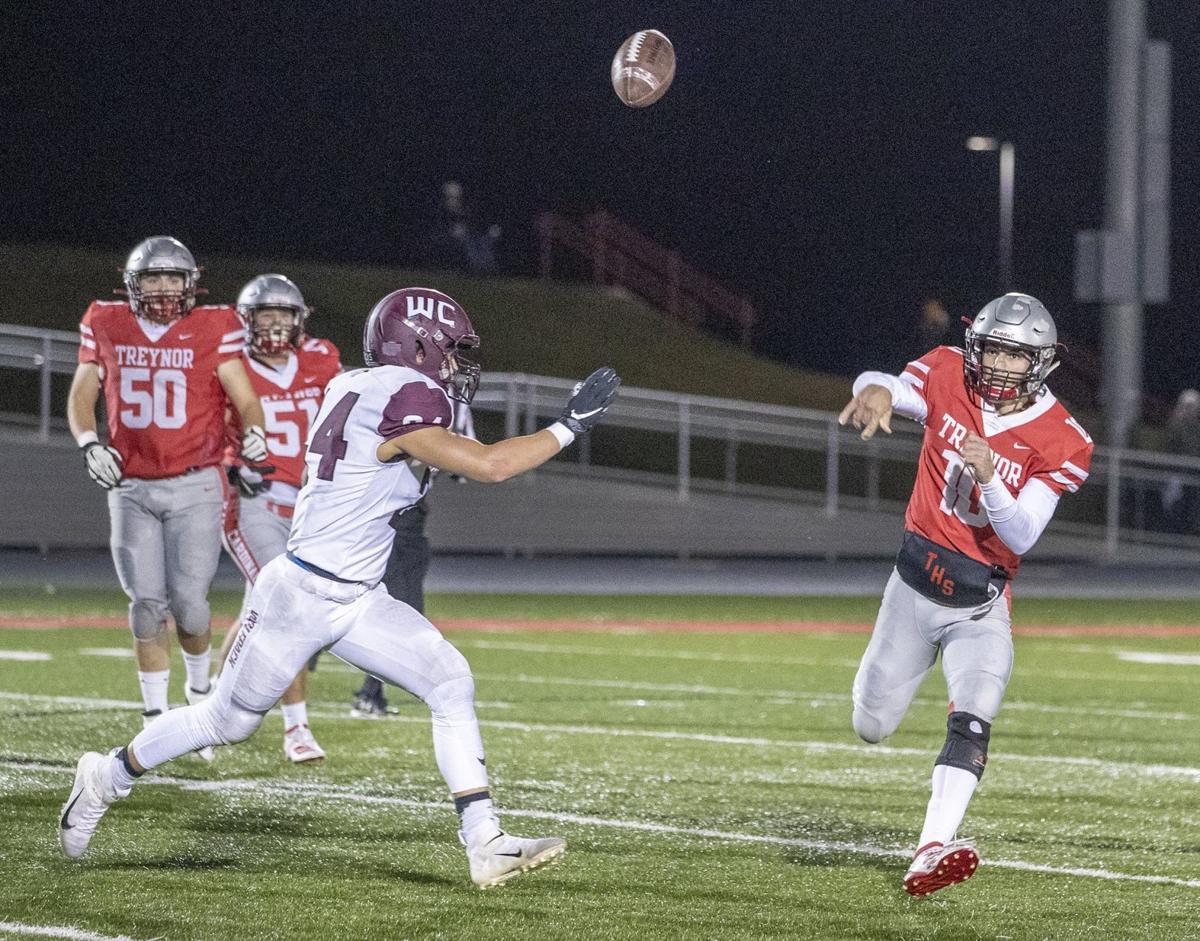 Treynor quarterback Jake Fisher (10) throws while under pressure from Western Christian’s Tristan Mulder (24) during the first quarter on Friday, Nov. 1, 2019.

So much can change over the course of a year in football.

Treynor football coach Jeff Casey is likely preaching that message to his team this week.

The Cardinals last season opened their playoffs against eventual state champion West Sioux. A 49-14 loss ended Treynor’s season and proved to be the first step in West Sioux’s trip to the UNI-Dome.

Fast forward 12 months. Treynor again is prepping for a trip to Hawarden. Only this time, the Cardinals are doing so with a perfect 10-0 record. And instead of an opening-round clash, the teams will be meeting in the quarterfinal round Friday at 7 p.m. with a trip to Cedar Falls and the semifinal round on the line.

“The situation was kind of big for us last year,” Casey said. “It was one of those things where our kids have never been in that position before, so it was a little bit overwhelming for them.

“Now that we’ve got a playoff win under our belt and with the experienced group of kids that we have, there’s certainly a different mindset this year.”

That mindset likely is a winning mentality. The only team to hand West Sioux a loss this season is the one Treynor took down last Friday, Western Christian. West Sioux dropped a 25-21 decision at Western Christian on Oct. 4. Casey knows his team will need to be at its best to leave Hawarden Friday victorious.

Another strong defensive effort will be required. West Sioux quarterback Hunter Dekkers, an Iowa State recruit, has thrown for an eye-popping 3,153 yards, 31 touchdowns and only two interceptions. He leads the state in passing yards and is ninth in touchdown passes.

“The film is telling us that they’re a really good football team,” Casey said. “Obviously, they’re the top offense in Class 1-A for a reason, and they have some really great skill players. What we’re doing is trying to get better at the details. At this point in the season, we feel comfortable with what we’re doing, and we just want to keep doing what’s gotten us here so far.”

That would mean playing another stout defensive game. The Cardinals have allowed no more than 20 points in any game this season and have shut out opponents three times. They allowed only 156 yards of total offense against Western Christian, a 21-10 victory.

Treynor quarterback Jake Fisher managed the game well, throwing for 121 yards and a touchdown without a turnover. The running game managed 88 yards and a pair of Fisher touchdown runs.

Casey would like to see the traits that got the Cardinals to 10-0 exhibited Friday.

“The play of our offensive line is going to be key for us to continue to move the football the way we have all this year,” Casey said. “We’ve been riding those guys all year, and we’re going to keep doing that.”

IHSAA releases 1-A, 2-A district pairings

The Iowa High School Athletic Association on Wednesday released district baseball pairings for Class 1-A and 2-A.

Treynor’s Jack Tiarks (23) is pursued by Western Christian’s Shawn DeWit (15) as he rushes the ball during the first quarter on Friday, Nov. 1, 2019.

Treynor quarterback Jake Fisher (10) throws while under pressure from Western Christian’s Tristan Mulder (24) during the first quarter on Friday, Nov. 1, 2019.