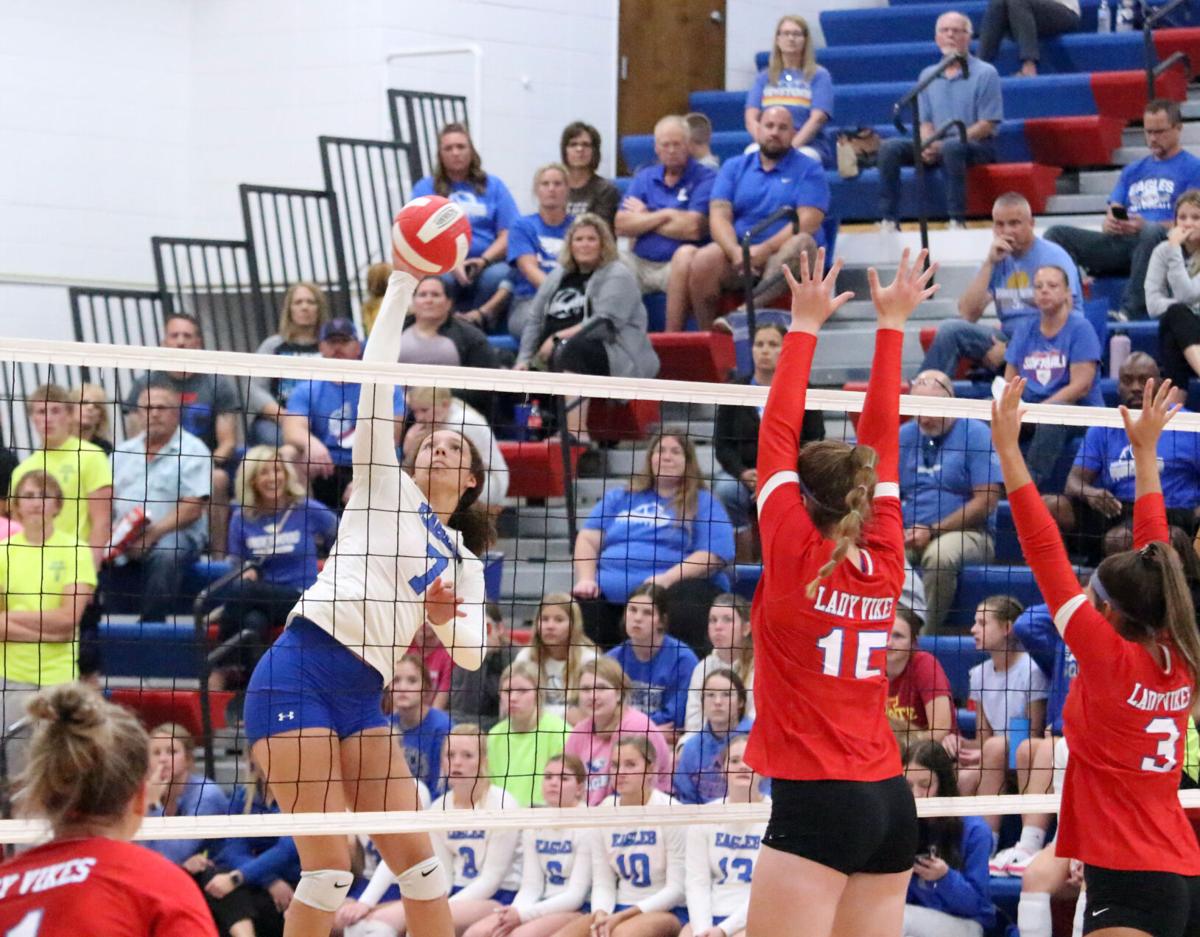 Underwood sophomore Alizabeth Jacobsen smacks one for one of her team-leading 22 kills. 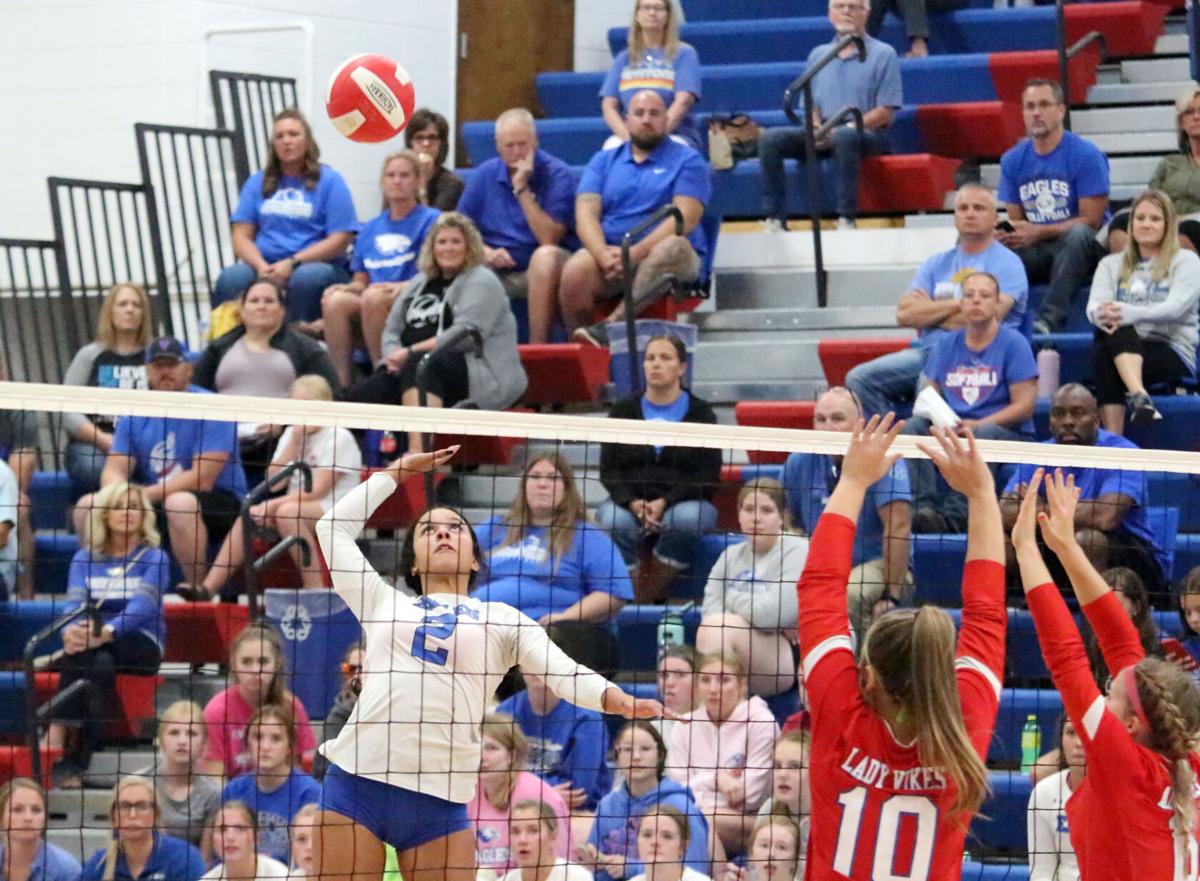 Underwood junior Aliyah Humphrey goes up to smack the ball down for one of her 21 kills against AHSTW on Tuesday night. 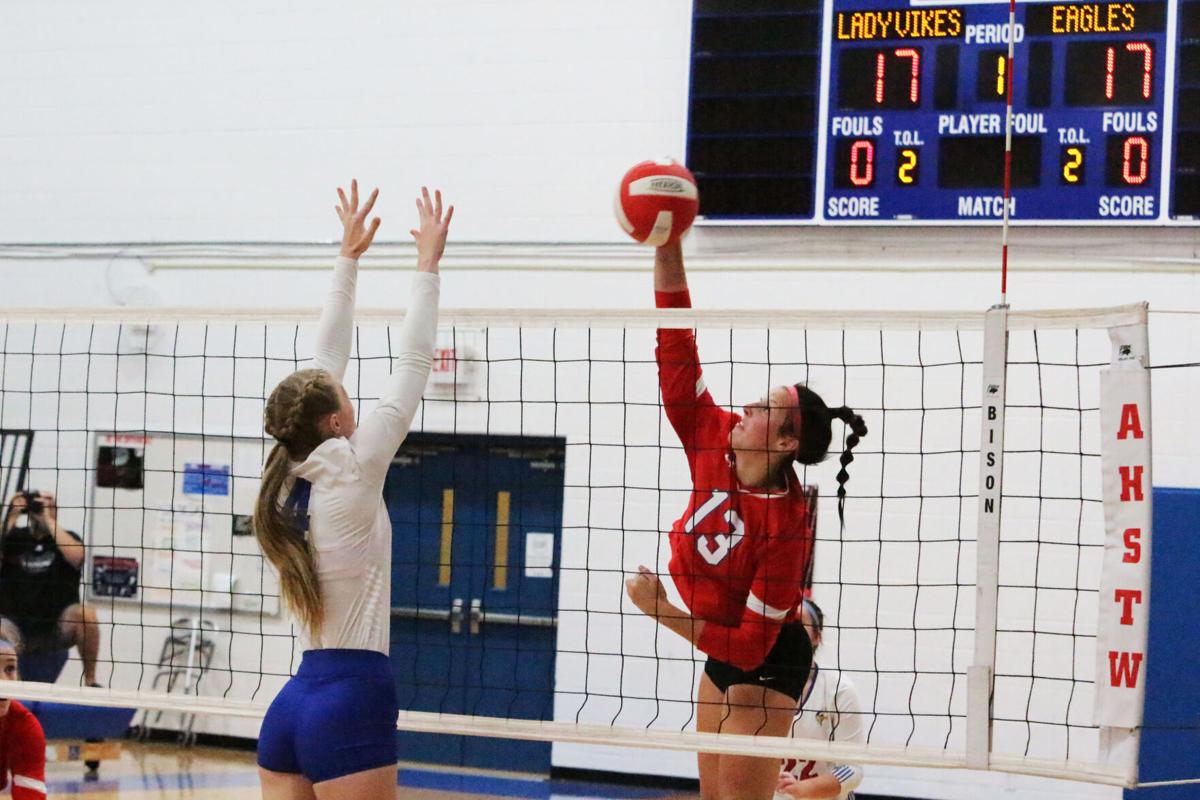 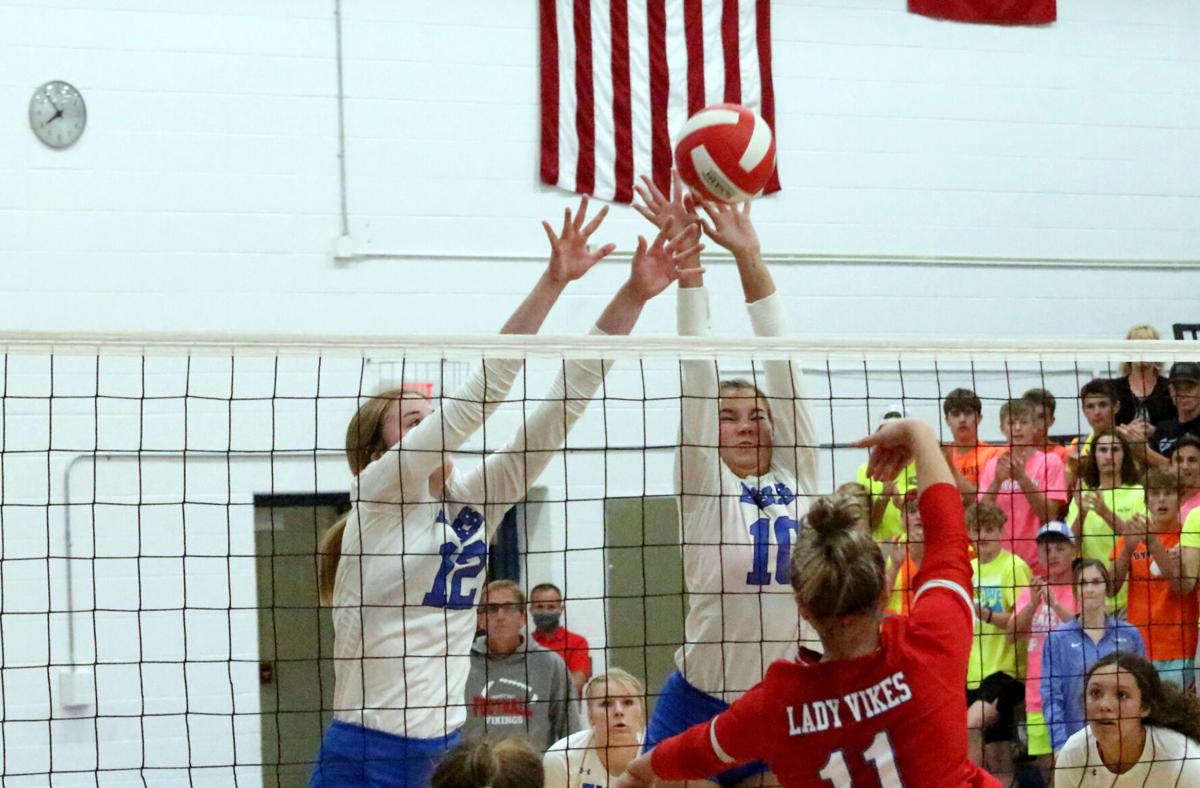 After the visiting Underwood Eagles volleyball team won the first set 26-24, it seemed like AHSTW was about to finish things convincingly after defeating Underwood 25-9 in set two, which then led to a set three win as well. However, the Eagles rallied back to defeat AHSTW in five sets in Avoca on Tuesday night.

“At times we were having an off night,” Underwood coach Liz Stein said. “Some things just weren’t clicking and it wasn’t our best night, but the girls fought until the end and that helped us stay in it. We fought back from a lot of deficits, which is not something we would have been able to do at the start of this year. We’re still working on the mentality, but this game shows that we’ve already improved a lot.”

The Eagles led most of the first set only to see the Lady Vikes rally and bring it to match point, with the score showing 24-22 in favor of AHSTW. The Eagles stole the set, scoring the final four points of the first set to take set one 26-24.

The Lady Vikes would claim the next two sets, including an authoritative 25-9 win in set two and win set three 25-23. While the Lady Vikes held on the go up 2-1 in the match, you could feel Underwood gaining momentum and this match, as they pushed the third set to its brink. This match felt like it was anything but over.

“I think we got a little anxious after that second set,” Underwood sophomore Alizabeth Jacobsen said. “Our coaches put some pressure on us to step up and just told us to get after it. I think we did exactly that and in the end, everything worked out.”

Lead by a pair of dominating net presences by Jacobsen and junior Aliyah Humphrey the Eagles forced a match-deciding set five after a 25-19 win in set four. The Lady Vikes took an early three-point advantage in set five, 5-2. The Eagles then began clawing their way back and with a kill by Humphrey to end the game with a 15-12 set five win.

“Earlier in the year we had trouble with answering back if we lost a set,” Humphrey said. “We’ve really grown a lot as a team. Coach does a great job getting after us and firing us up and that definitely helped here. It helped us regroup and come together, work things out and beat a good team here.”

“These two girls did great tonight,” Stein added. “We just kept feeding them tonight because they were just unstoppable tonight. They did a great job adjusting to their (AHSTW’s) sets and remaining aggressive at the net. They were very key here tonight.”

Humphrey finished the night with 21, second to her teammate Jacobsen who ended her performance with 22 kills. AHSTW senior Natalie Hagadonled all players with 27 kills.

The loss snaps a six-game win streak for the Lady Vikes. While this season has given a lot for this AHSTW team to be proud of, coach Kelsey Muxfeldt and the Lady Vikes look to get back on track with another streak.

“I thought our girls still played well,” Muxfeldt said. “We had our moments where things went well where we’ve struggled in the past and had some good hustle plays a this is a tough one. I’m very proud of them for competing. We just got to get over this hump here soon, though this game was a good chance to do that, we have plenty more opportunities coming up here.”

The Abraham Lincoln Lynx wrestlers like the fact that many students are out for the team this winter. Coach Adam Mantz is also pleased with th…

Tight defense and an early 10-0 Saintes run helped lead St. Albert to a season-opening 48-8 victory over Tri-Center on Tuesday night.

Bryant Keller placed 11th at the Class 3A state cross country championship on Friday at Lakeside Municipal Golf Course in Fort Dodge to earn a medal for the Rams.

Underwood sophomore Alizabeth Jacobsen smacks one for one of her team-leading 22 kills.

Underwood junior Aliyah Humphrey goes up to smack the ball down for one of her 21 kills against AHSTW on Tuesday night.