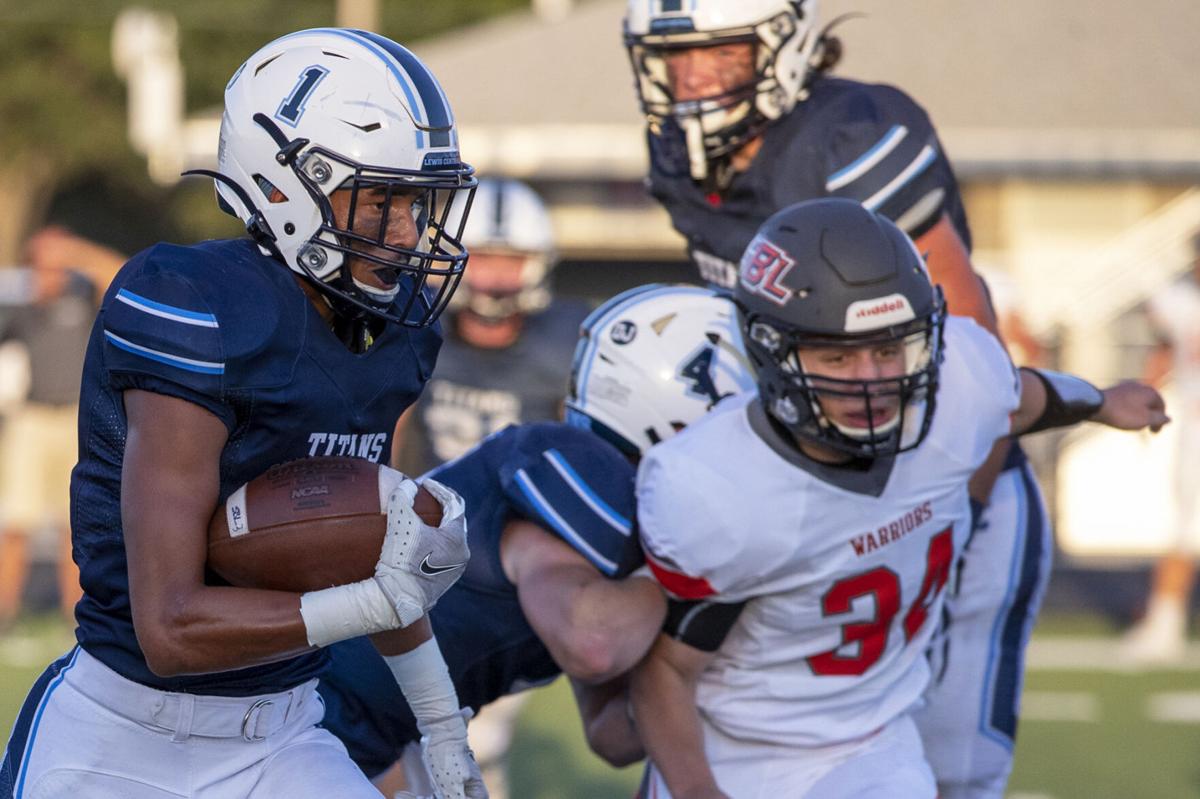 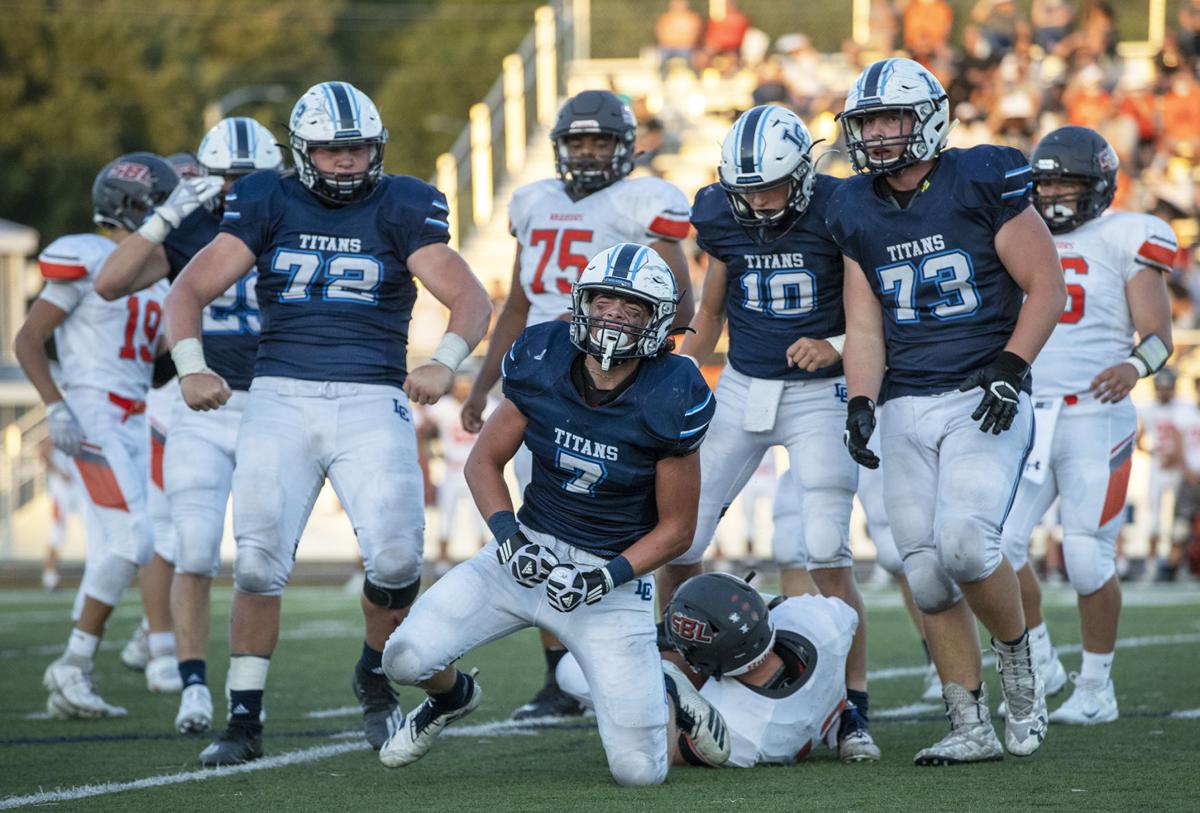 Lewis Central’s Wyatt Hatcher (7) reacts after tackling Sergeant Bluff-Luton’s Jacob Imming, at right, for a loss of yards during the first quarter on Friday, Sept. 4, 2020. 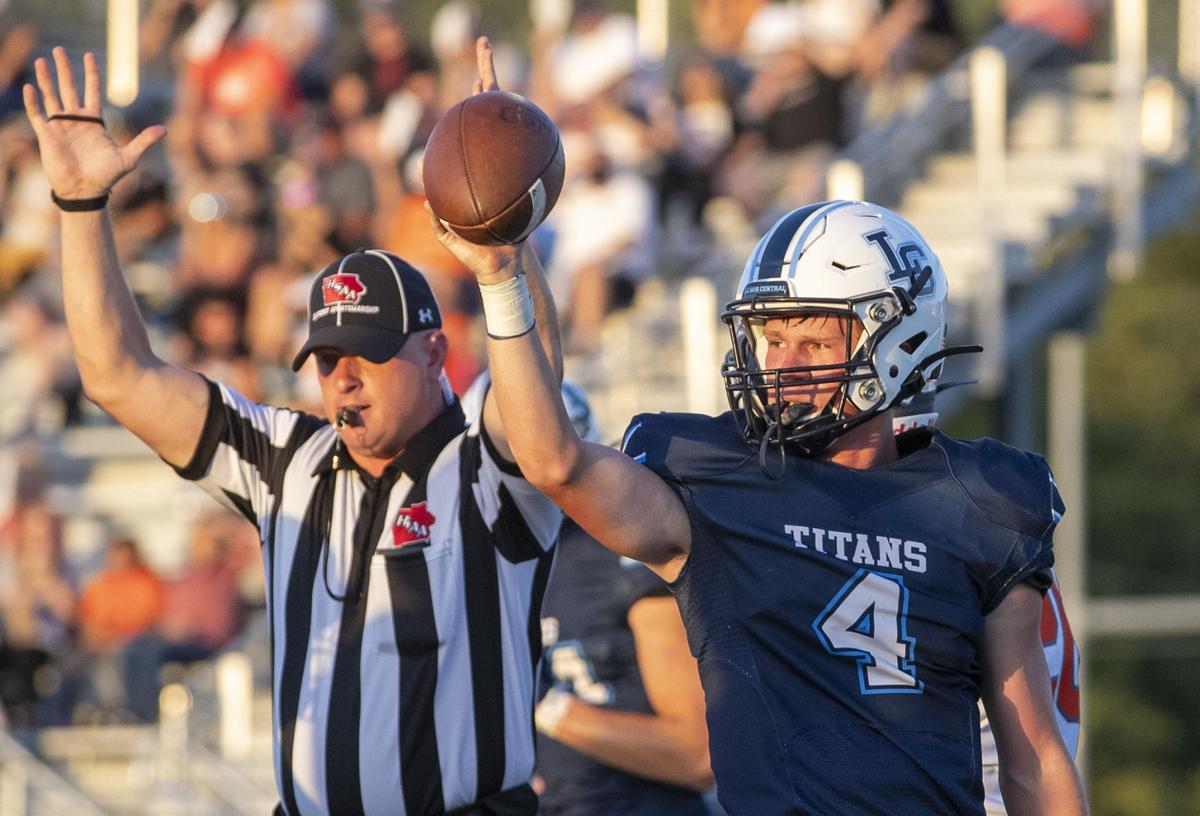 Lewis Central quarterback Jonah Pomrenke (4) hoists the ball up after sneaking into the end zone for a touchdown during the first quarter on Friday, Sept. 4, 2020. 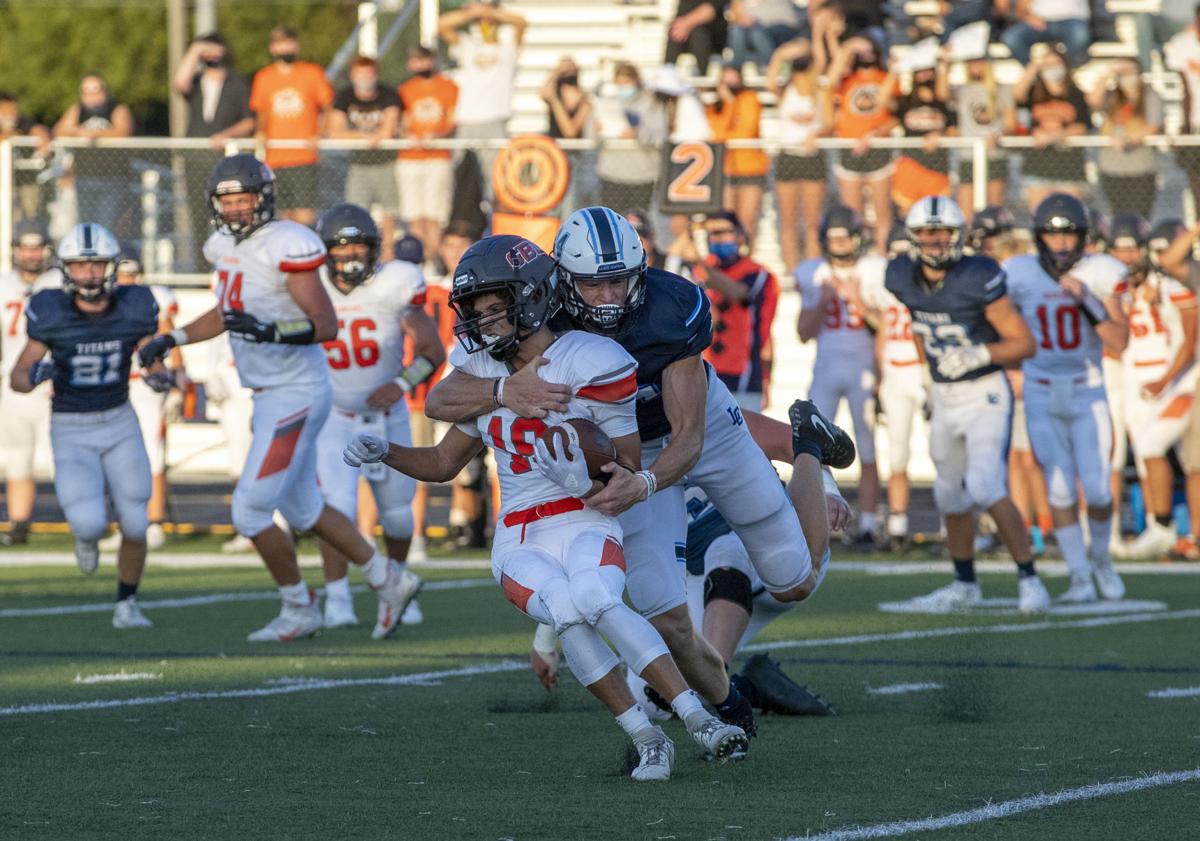 Sergeant Bluff-Luton’s Ashton Verdoorn (19) is tackled in the backfield by Lewis Central’s Thomas Fidone, at right, during the first quarter on Friday, Sept. 4, 2020. 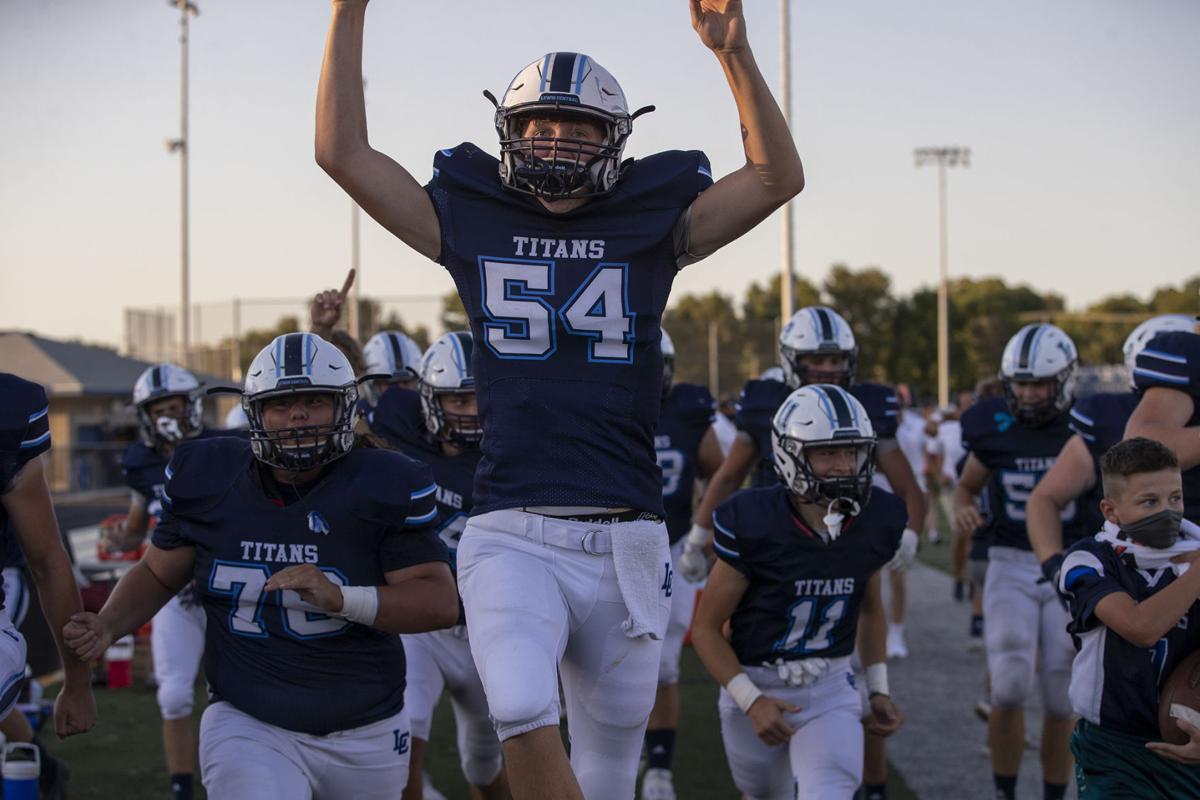 Colby Souther (54) and the Lewis Central sideline celebrate after Jonathan Humpal scored a touchdown on the opening kickoff of the game on Friday, Sept. 4, 2020. 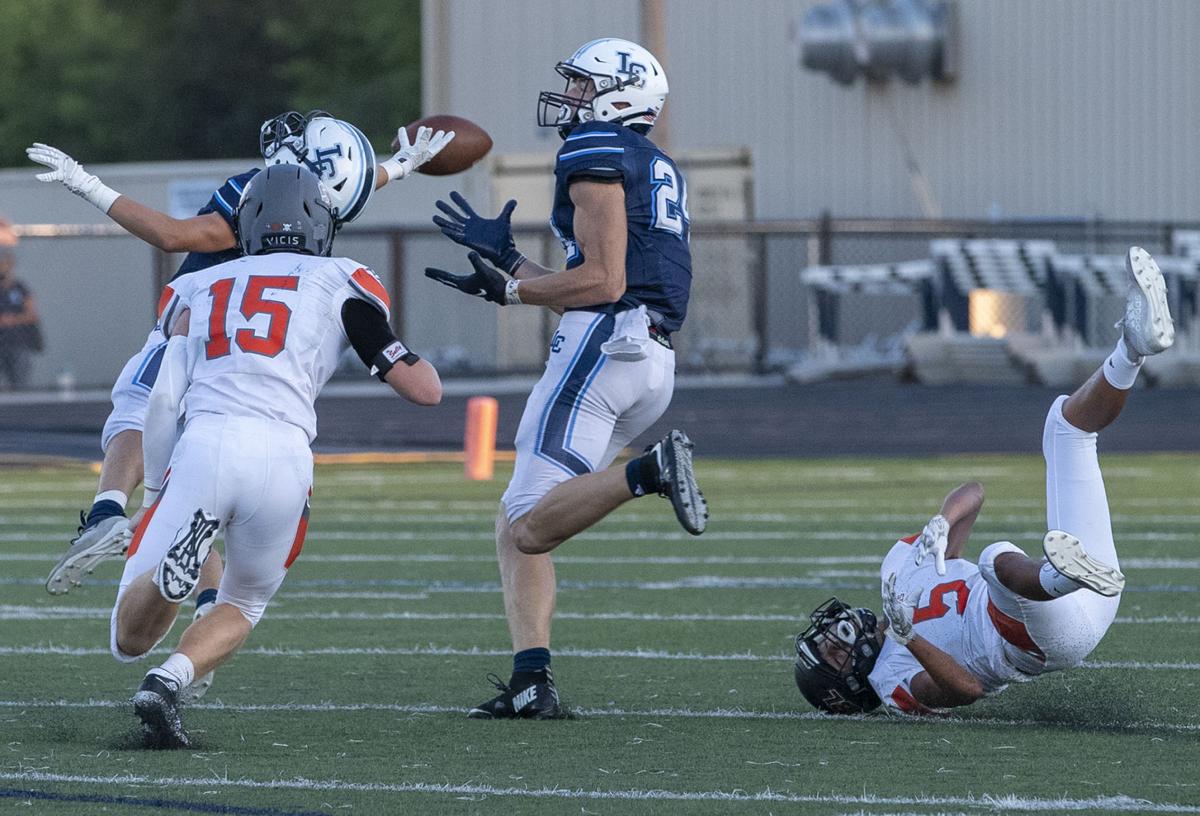 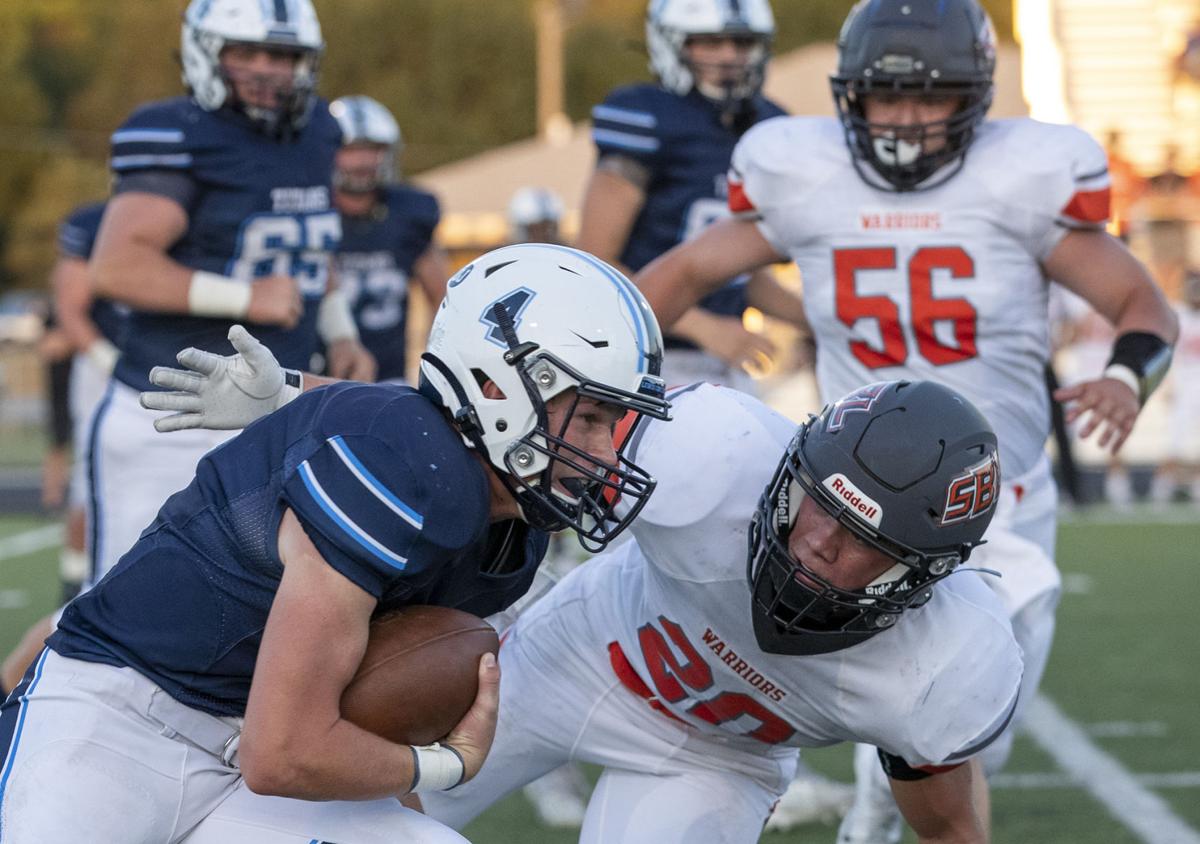 Lewis Central quarterback Jonah Pomrenke (4) lunges ahead as Sergeant Bluff-Luton’s Jacob Spreng (20) comes in to tackle during the first quarter on Friday, Sept. 4, 2020.

After finishing the 2019 season with matching 10-2 records, and making it to the Class 3A semifinal round, Lewis Central and Sergeant Bluff-Luton came into Friday night’s prep football matchup looking to make a statement.

Lewis Central looked as if it was on its way to making that statement in convincing fashion over a ranked foe, leading 35-14 in the 3rd quarter. But, the Warriors weren’t done yet, scoring two touchdowns in a matter of two minutes - including a punt block - making the score 35-28.

“We made it really interesting, there, but they played a really good ball game,” Lewis Central head coach Justin Kammrad said.

Needing a good possession, the Titans leaned on senior quarterback Jonah Pomrenke and University of Nebraska recruit Thomas Fidone. Pomrenke went to Fidone on two consecutive plays out to the right, covering 36 yards and ultimately setting up a 1-yard touchdown run by senior Logan Katzer.

“Those were true quarterback reads. We have a run play called and if they are going to give us soft coverage and play off and let us get the ball to the outside, we are going to take it. And that’s exactly what we did,” Kammrad said.

The score was exactly what Kammrad wanted to see from his team when things were getting tight.

“The good thing is, where our program is at, there were no heads down, there was no ‘this is over,'” Kammrad said. “There was a sense of calmness and our guys went out and continued to execute and made some big plays.”

The next time the Warriors had the ball the Titan defense and special teams came up big, forcing a quick possession and a misplayed punt. Lewis Central took over at the SB-L 10-yard line, and just a few plays later Katzer punched in his second 1-yard touchdown run.

Kammrad was proud of the defensive effort and their ability to “just rally to the football and create some turnovers.” The Titans forced two fumbles and collected an interception on the night.

Early in the game the teams went back-and-forth.

The night started with a bang for the Titans as sophomore Jonathan Humpal returned the opening kickoff 91 yards for a touchdown.

The Warriors were then forced to punt, but Lewis Central muffed the kick giving Sergeant Bluff-Luton another chance. Sophomore quarterback Tyler Smith connected with senior Kaden Helt for a 23-yard touchdown to tie the game at seven.

The Titans built a 28-7 lead following a 1-yard sneak by Pomrenke, an 18-yard touchdown catch by Wyatt Hatcher, and a 19-yard strike to Fidone.

SB-L followed the Fidone touchdown catch with a nice 80-yard touchdown drive to bring the score back tio 28-14 with just 41 seconds to halftime. The Warriors were also set to get the ball to start the second half.

But LC wasn’t content. They took over at their own 39 after another good return from Humpal.

“We talk to our kids about being aggressive all the time. Hey, let’s take a shot, see what happens,” Kammrad said.

After Pomrenke found Brayden Loftin for five yards, the Titans took a timeout. On the very next play, Pomrenke found Fidone for a 56-yard strike to build the lead to 35-14.

“By golly, it worked out,” Kammrad said. “It wasn’t the designed play. Jonah was about to take off, and he saw Thomas come across the middle, wide open. The ball was just high enough that the defender couldn’t get to it, and he made a great play.”

Fidone finished a record-setting night with 243 yards (unofficially), breaking the school record of 208 yards set by Mitchell Brinkman in 2014. Fidone had nine catches, including two touchdowns.

“Obviously, I need to be a team player,” Fidone said. “Anyone who is an offensive player is going to want the ball. This week they weren’t really double and triple-teaming me so we had shots we could take and we took them.”

About Fidone’s record night, Kammrad said, “This week we felt like we had some things on film that we could use to our advantage to get him the ball, to get him early in the ball game.”

Pomrenke tallied 401 yards passing (about 20 shy of a school record) and three touchdowns.

“This is a big confidence booster. We are really feeling good, and we are ready to play anyone now,” he said.

The win was important for the Titans as they look forward to the rest of the season.

“They changed the rankings on us and they were ahead of us and that set a little fire under us,” Fidone said. “We knew we had to come out here and set the tone and we did that. I think our team’s coming together right now and I feel pretty good about this team.”

To say 2020 has been unique from a prep sports perspective would be an immense understatement.

The Class 3-A No. 4 Titans got a pair of rushing touchdowns from senior running back Logan Katzer after a Carroll fumble and three-and-out on …

CRESTON – Glenwood won the team titles in both the girls and boys races at Tuesdays Creston cross country Invite.

Lewis Central gets complete effort in win over Glenwood

GLENWOOD – All three phases were clicking for Class 3-A No. 4 Lewis Central on Friday.

Only five days before its season opener against Iowa State, TCU received some positive news.

SIOUX CITY – Points were aplenty in the first half Thursday as Sioux City East earned a 55-26 homecoming victory over Thomas Jefferson on Thursday.

Lewis Central experiments with lineups in dual victory over Atlantic

The St. Albert-AHSTW football game, originally scheduled for tonight at 7 p.m. in Avoca, has been canceled.

Lewis Central’s Wyatt Hatcher (7) reacts after tackling Sergeant Bluff-Luton’s Jacob Imming, at right, for a loss of yards during the first quarter on Friday, Sept. 4, 2020.

Lewis Central quarterback Jonah Pomrenke (4) hoists the ball up after sneaking into the end zone for a touchdown during the first quarter on Friday, Sept. 4, 2020.

Sergeant Bluff-Luton’s Ashton Verdoorn (19) is tackled in the backfield by Lewis Central’s Thomas Fidone, at right, during the first quarter on Friday, Sept. 4, 2020.

Colby Souther (54) and the Lewis Central sideline celebrate after Jonathan Humpal scored a touchdown on the opening kickoff of the game on Friday, Sept. 4, 2020.

Lewis Central quarterback Jonah Pomrenke (4) lunges ahead as Sergeant Bluff-Luton’s Jacob Spreng (20) comes in to tackle during the first quarter on Friday, Sept. 4, 2020.