Saintes tough out win over A.L.
0 comments
Share this
{{featured_button_text}}
1 of 4 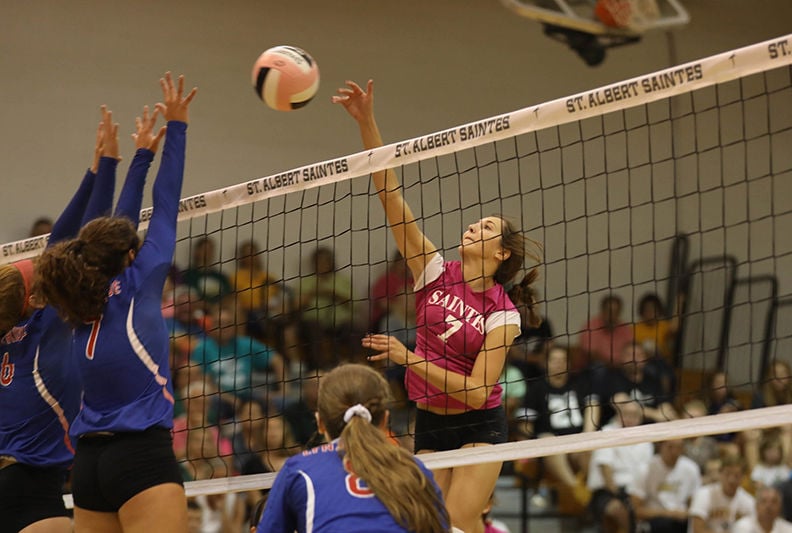 St. Albert's Kalyn Wettengel goes for the kill against the defense of Abraham Lincoln's Miranda Hennings (6) and Julia Wagoner (7). 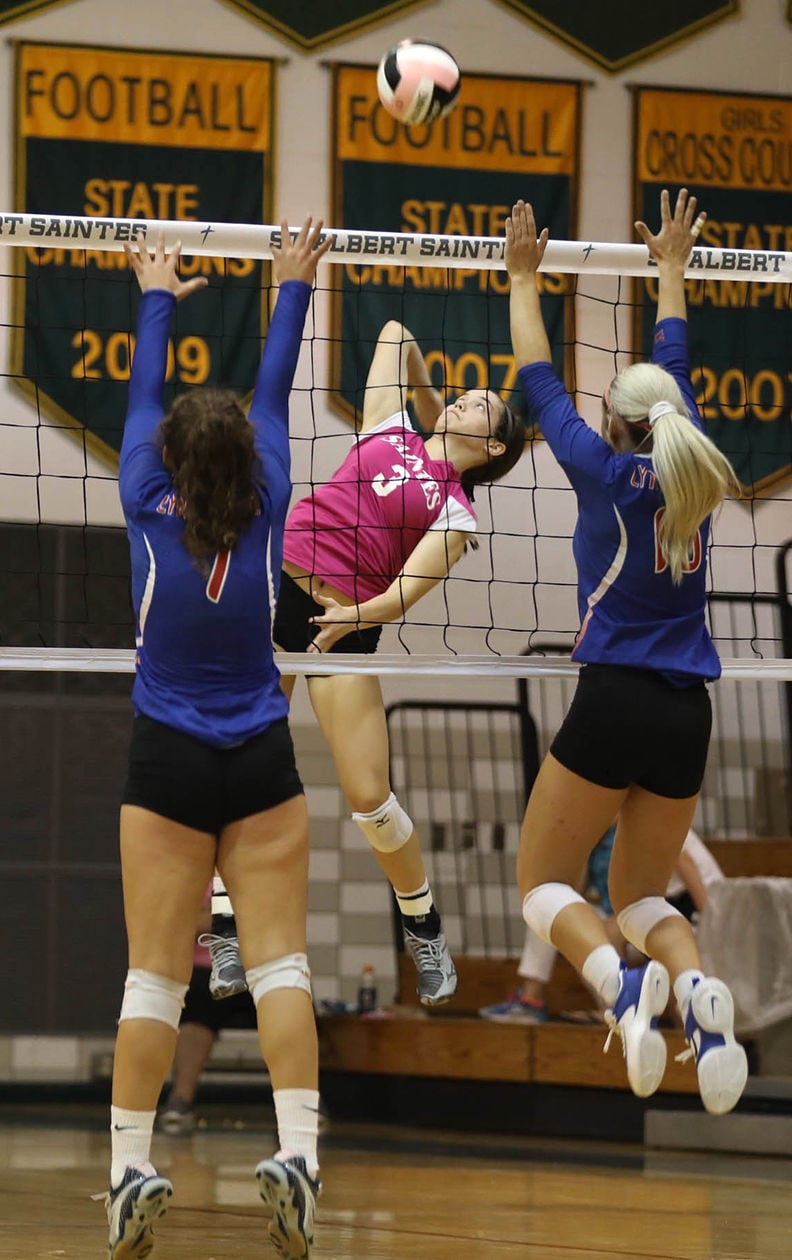 St. Albert's Allie Petry focuses on the ball against the block of Cailey Schaa (10) and Julia Wagoner (7). 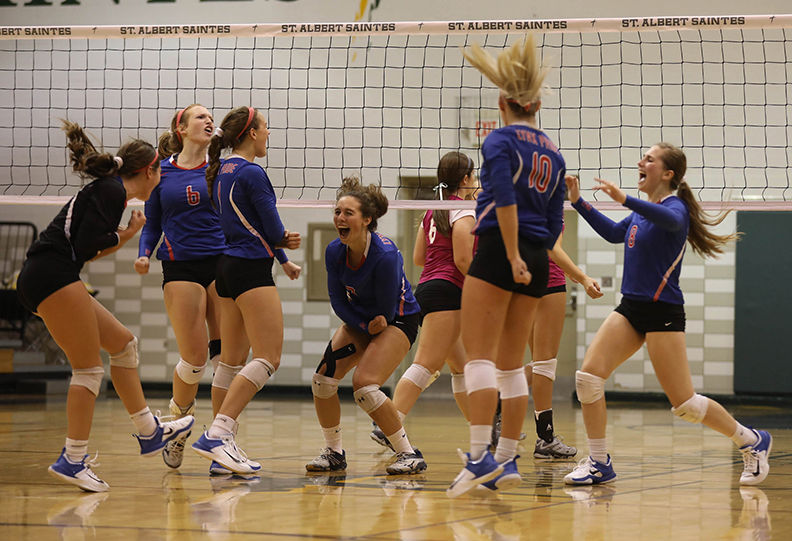 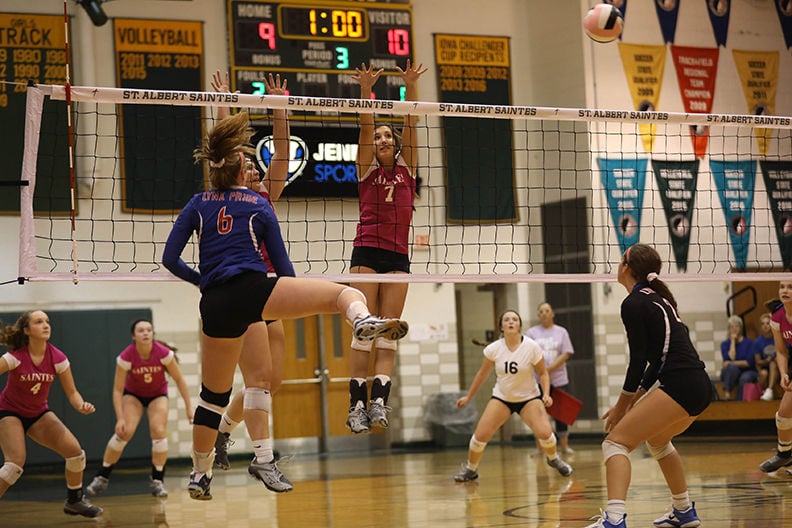 Kalyn Wettengel (7) goes high as A.L.'s Miranda Hennings (6) hits one over the net.


It wasn’t very clean, but then again, city volleyball showdowns in Council Bluffs rarely are.

No matter what’s really on the line, it always feels like there’s a little something more.

"Everybody is pretty much in a different class," St. Albert coach Angie Lantz said, "but at the same token, it’s for bragging rights."

Lantz’s squad topped Abraham Lincoln in a hard-fought, four-set nonconference battle at St. Albert High School Thursday night, winning 25-19, 27-25, 23-25, 25-17. It was messier than the fifth-ranked team in Class 2-A would have liked, but after getting swept by Sergeant Bluff-Luton in its season opener last week, nobody on the team was complaining too much.

"We’re still riding the roller coaster a little bit," St. Albert senior Sydney McLaren said. "There’s a lot of things that we have to work on."

McLaren finished with a match-high 18 kills. Freshman Allie Petry followed with 13, and Bailey White and Kalyn Wettengel each added six. White delivered six of the team’s 11 aces, and Wettengel contributed a pair of blocks.

The Saintes made sure they came out stronger than they did last year, when they dropped the opening set, before coming back and limiting the Lynx to 17 points or fewer the rest of the way. They took a 4-3 lead on a rare kill by setter Lexie Petry and didn’t relinquish it the rest of the set.

In Game 2, however, the Lynx showed they could throw a counterpunch after suffering a blow. The visitors put themselves in position to even the match by playing solid defense and making big plays at key moments.

A late, second-set kill by Wagoner capped a four-point rally and prompted the Saintes to take a timeout at 23-22. When play resumed, St. Albert scored five of the next seven points, winning after a block by Alesha Johnson and an A.L. hitting error.

"I think it comes down to our mental toughness," A.L. coach Katie Darrington said. "I honestly think in games two and three we attacked as the team that we’re going to be. One and four, we just played enough to hang in there."

The game might have slipped away from the Lynx, but the team kept the match alive by stealing game three and forcing a fourth set.

After jumping out to a 7-2 lead, A.L. got a little less aggressive, and the Saintes took advantage of it. The match ended on a 9-3 St. Albert run. A Kalyn Wettengel block and a McLaren ace sealed the deal.

"It’s early in the season," Lantz said. "We’re still figuring out that there’s a lot of things we’ve got to work on yet, and that by far, this is not the best we want to play all season."

After 49 years, Heffernan ready to step away

Jim Heffernan knew it was time.

Lewis Central routed Columbus Scotus (Neb.) 6-0 on Friday in the Thomas Jefferson Invite at Wickersham Stadium to improve to 3-0 on the season…

The Lewis Central boys and girls track teams both finished fifth at the Gary DouBrava Invitational in Urbandale on Tuesday.

Thomas Jefferson girls soccer held both its opponents scoreless on Saturday during its home invite to start the season 2-0.

After an uneventful first quarter, Iowa Western got rolling in a 54-0 win against Ellsworth Friday night at Titan Stadium in Council Bluffs.

St. Albert's Kalyn Wettengel goes for the kill against the defense of Abraham Lincoln's Miranda Hennings (6) and Julia Wagoner (7).

St. Albert's Allie Petry focuses on the ball against the block of Cailey Schaa (10) and Julia Wagoner (7).

Kalyn Wettengel (7) goes high as A.L.'s Miranda Hennings (6) hits one over the net.