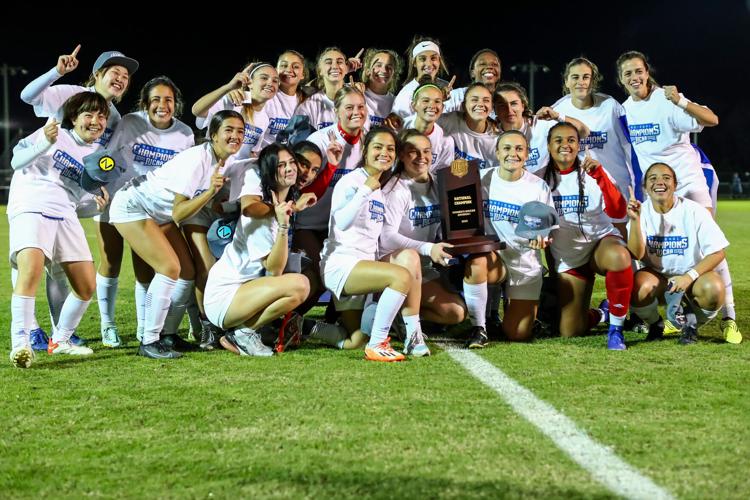 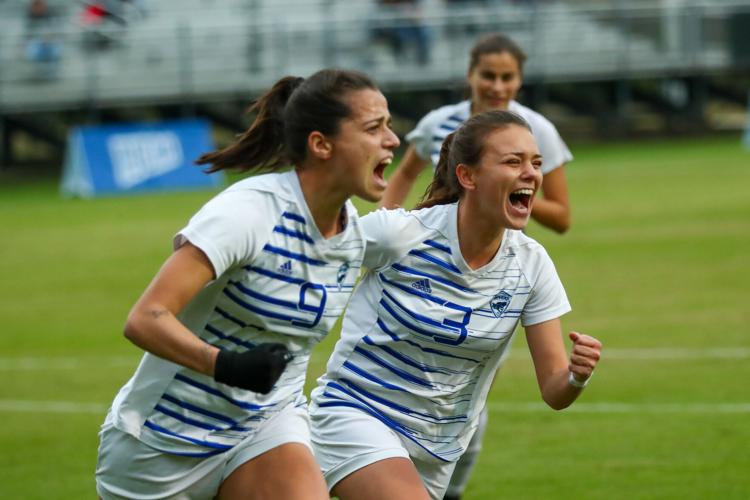 Iowa Western's Marta Llopis (9) and Paula Boza (3) celebrate after Llopis scores a penalty kick in the first half vs Salt Lake. 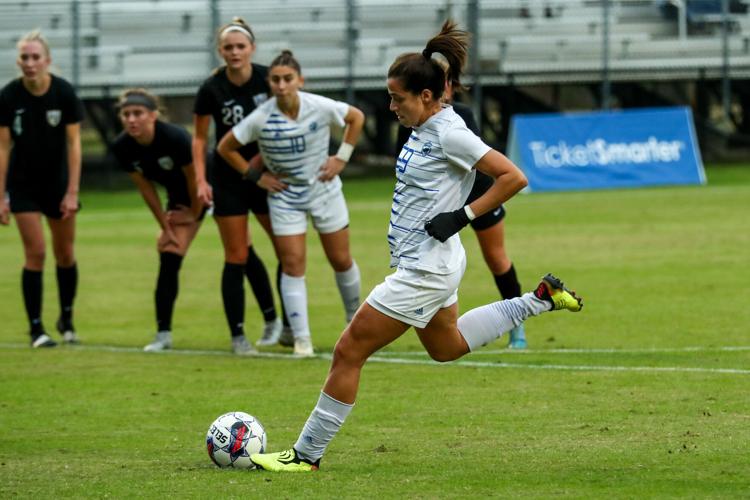 Iowa Western's Marta Llopis (9) takes a penalty kick in the first half vs Salt Lake. 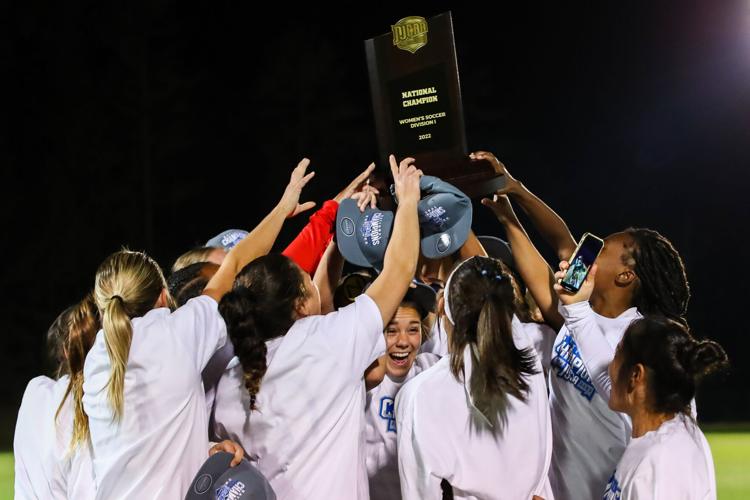 “It feels great, it’s an awesome feeling,” Reiver coach Adam Sanchez said. “These players played an awesome tournament over these past four games, bought into everything we told them, and just believed we could do this.

“We played very difficult teams, I think we had the toughest path to the final of any team, but they just overcame the challenges and adversity and rose to the top. ”

The Reivers had some early chances with 13 total shots in the first half, but the Bruins held them off, but finally, in the 37th minute, Marta Llopis booted in a penalty kick to put the Reivers on the board.

“The ball was right there in front of the goal, we kept kicking at, but instead we got the penalty shot,” Llopis said. “I just walked up a sent it in and it felt like a lot of weight was lifted when it hit the net.”

Meanwhile, the Reiver defense held the Bruins to just two shots in the first half. Against a team that had had solid offensive success, Sanchez was pleased with how the Reivers shut down the Bruins and limited their chances.

“They didn’t any clean looks on goal and I thought our defense really stepped up,” Sanchez said. “We struggled early this season to get a shut out and now to get it done in the national championship game is a testament to these girls.

“The back line played great, but the front six really worked their butts off to deny any looks to Salt Lake’s front three and made it very hard for anything to get through. Just a really good overall team performance. It wasn’t our pretties match by championship matcher rarely are. As we told the group championships aren’t meant to be played, they’re meant to be won, and they did what it took to win.”

The Bruins came out with a fast start and held the ball on their attacking side of the field for the front half of the second half. However, the Reiver defense still limited the shots on goal to six in the second half with some great defense and superb goalkeeping by Bella Washington, who had five saves, kept the Bruins scoreless, and led to the 1-0 victory.

“It's absolutely amazing being here with my family,” Freshman forward Hannah Schimmer said. “This team really is my family even over the tournament our connection grew and we fight for each other. Overall it's just amazing and we’re crying and we’re so proud of each other, we all made this happen. ”

“We just kept telling each other that we can do this,” Llopis said. “We know that it was going to be hard, but we made it here and now we’ve won the nationals and are bringing home a trophy.”

During the awards ceremony, Hanna Schimmer was named the NJCAA Tournament MVP. Schimmer scored three goals and had an assist through the tournament's four-game stretch.

“The whole team was screaming for me and I’m just so happy right now,” Schimmer said. “It feels good, but this national championship, this took the whole family, and to hold up the trophy together, this is the best.”

Iowa Western finishes with its second national title in program history and with a 19-3-1 record.

Saudi Arabia scored one of the biggest World Cup upsets ever by beating Lionel Messi's Argentina 2-1 on Tuesday. Here's the latest from Qatar.

Qatar's last-minute decision to ban alcohol at World Cup stadiums has left Budweiser with loads of beer on its hands. The company has an innovative solution to offload it.

World Cup basics: What is stoppage time, and why is there so much of it?

With the U.S. back on the pitch today, 2022 World Cup audiences wonder why games are getting longer -- a lot longer. It's controversial, and here's why. Plus, explore all-time bests in the World Cup.

Gareth Bale converted a penalty kick in the 82nd minute to offset Tim Weah’s first-half goal and give Wales a 1-1 draw against the United States in the return to the World Cup for both nations. Weah is the son of former FIFA Player of the Year and current Liberian President George Weah. The United States was back in the World Cup after missing the 2018 tournament and appeared headed to victory. But Walker Zimmerman plowed down Bale from behind with the Welsh star’s back to the goal and Bale converted the penalty for his 41st international goal.

The 21 richest soccer players in the world

All of the wealthiest soccer players are men. Soccer, like many other sports, has a huge gender pay gap.

It seemed to be a response to FIFA's warning that players would be penalized if they wore colorful "One Love" armbands as a symbol for inclusion and diversity.

Morocco held 2018 finalist Croatia to a 0-0 draw at the World Cup  in another strong performance by a team from an Arab country. Morocco’s promising performance came 24 hours after Saudi Arabia sparked the first World Cup in the Middle East into life by beating Lionel Messi’s Argentina in one of the biggest upsets in the tournament’s history. Paris Saint-Germain star Achraf Hakimi had the best chance for Morocco with a thumping second-half shot punched away with both fists by goalkeeper Dominik Livakovic.

DOHA, Qatar (AP) — To 27-year-old Mariam, the World Cup match ticket was a precious gift. A sports fanatic, she traveled to the World Cup in Qatar from Tehran to catch Iran's opening game Monday against England, her first live soccer match.

Who has scored the most World Cup goals of all time?

Iowa Western's Marta Llopis (9) and Paula Boza (3) celebrate after Llopis scores a penalty kick in the first half vs Salt Lake.

Iowa Western's Marta Llopis (9) takes a penalty kick in the first half vs Salt Lake.