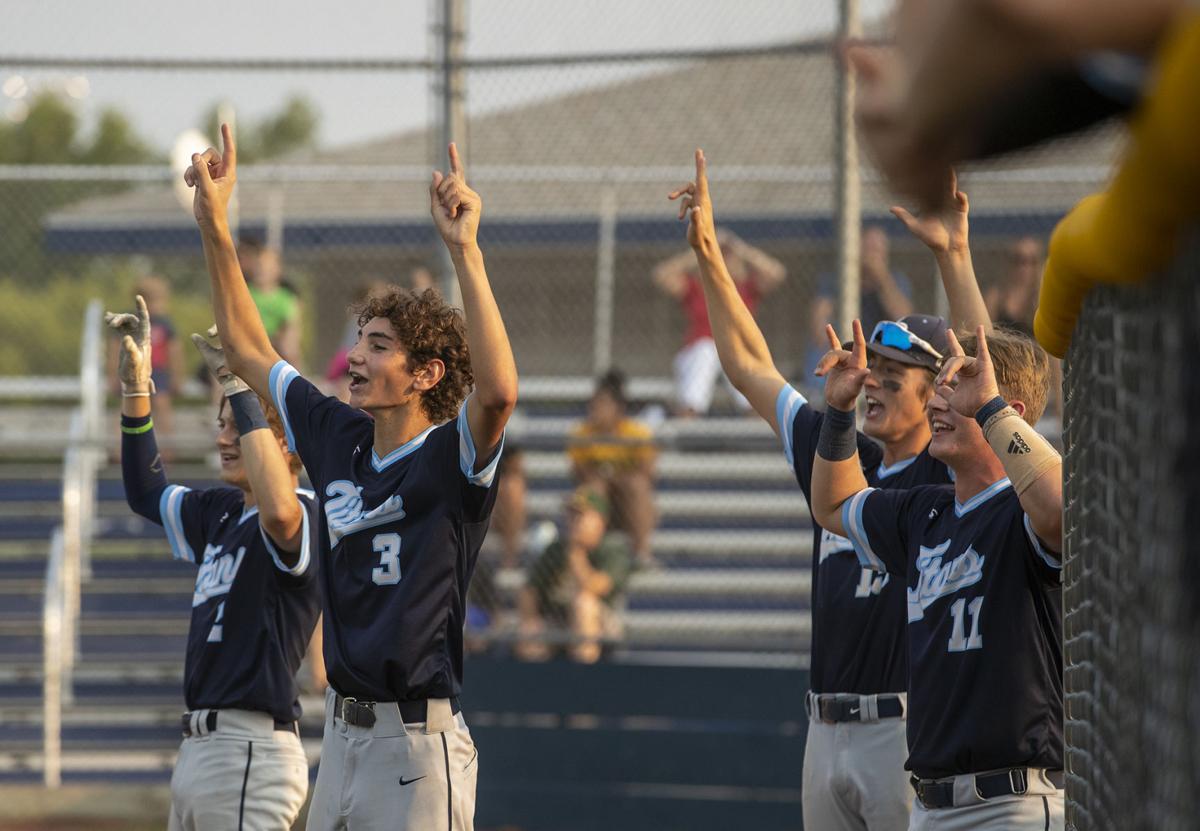 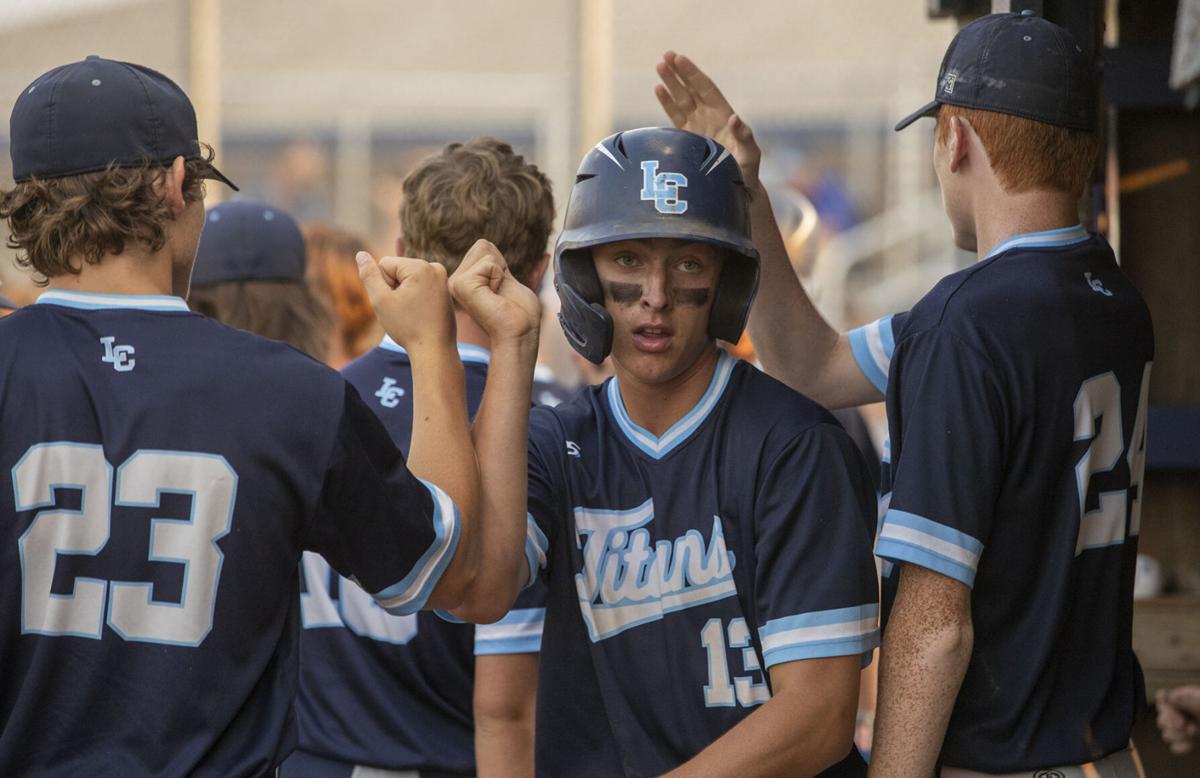 Lewis Central’s Aron Harrington (13) gets some love from teammates Jack Doolittle (23) and Trenton Johnette (24) after scoring during the third inning on Friday, July 16, 2021. 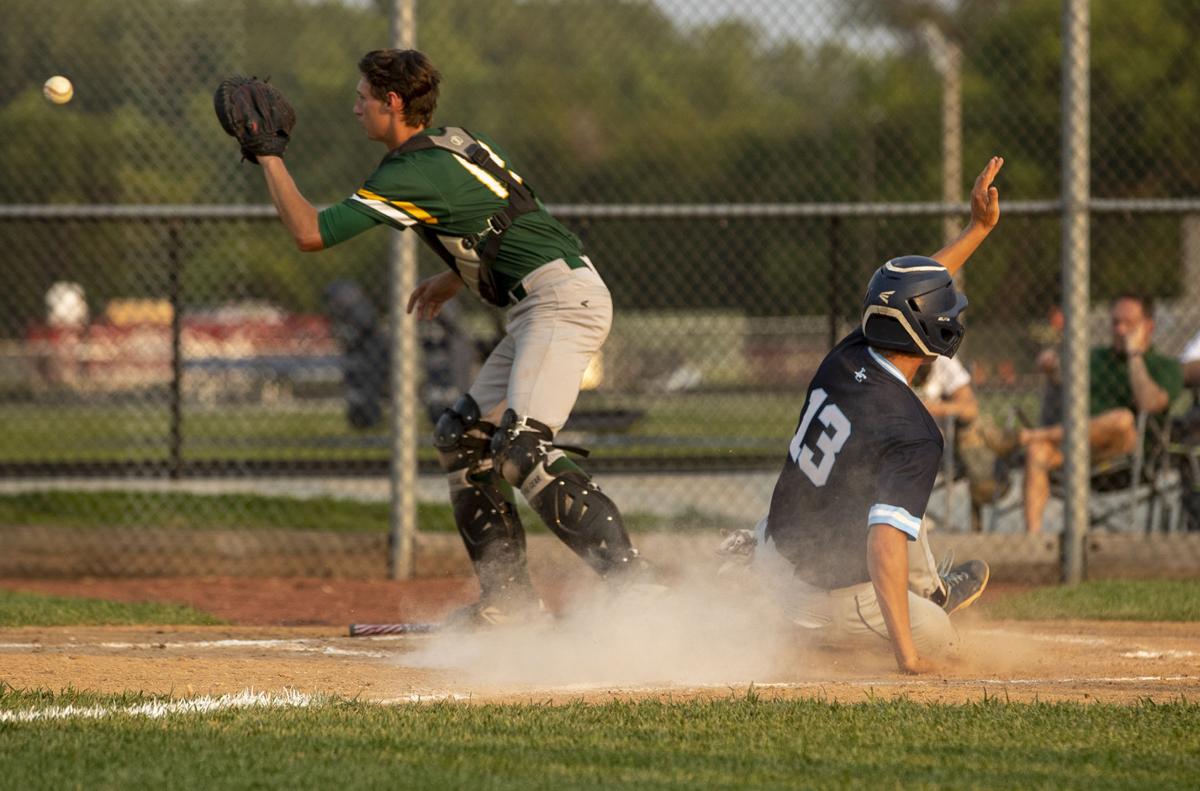 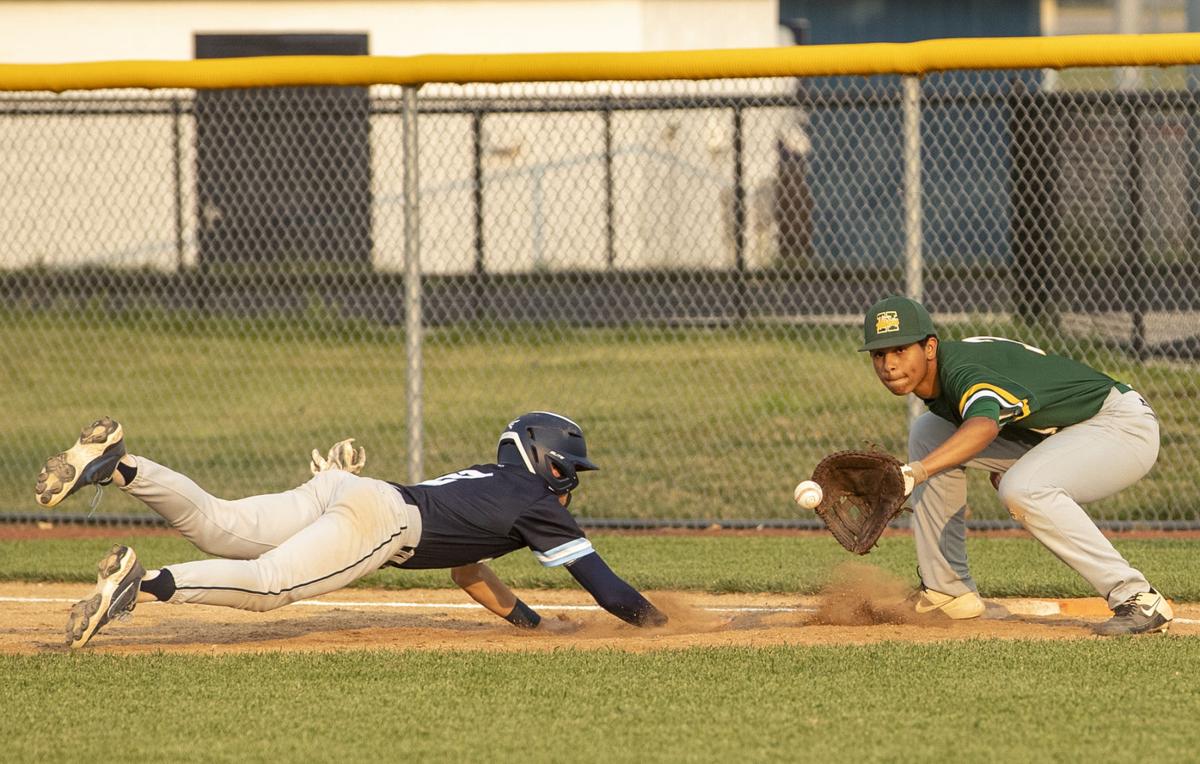 Des Moines Hoover’s Teran Bates, right, waits for the throw as Lewis Central’s Devin Nailor (2) slides back to first during the second inning on Friday, July 16, 2021. 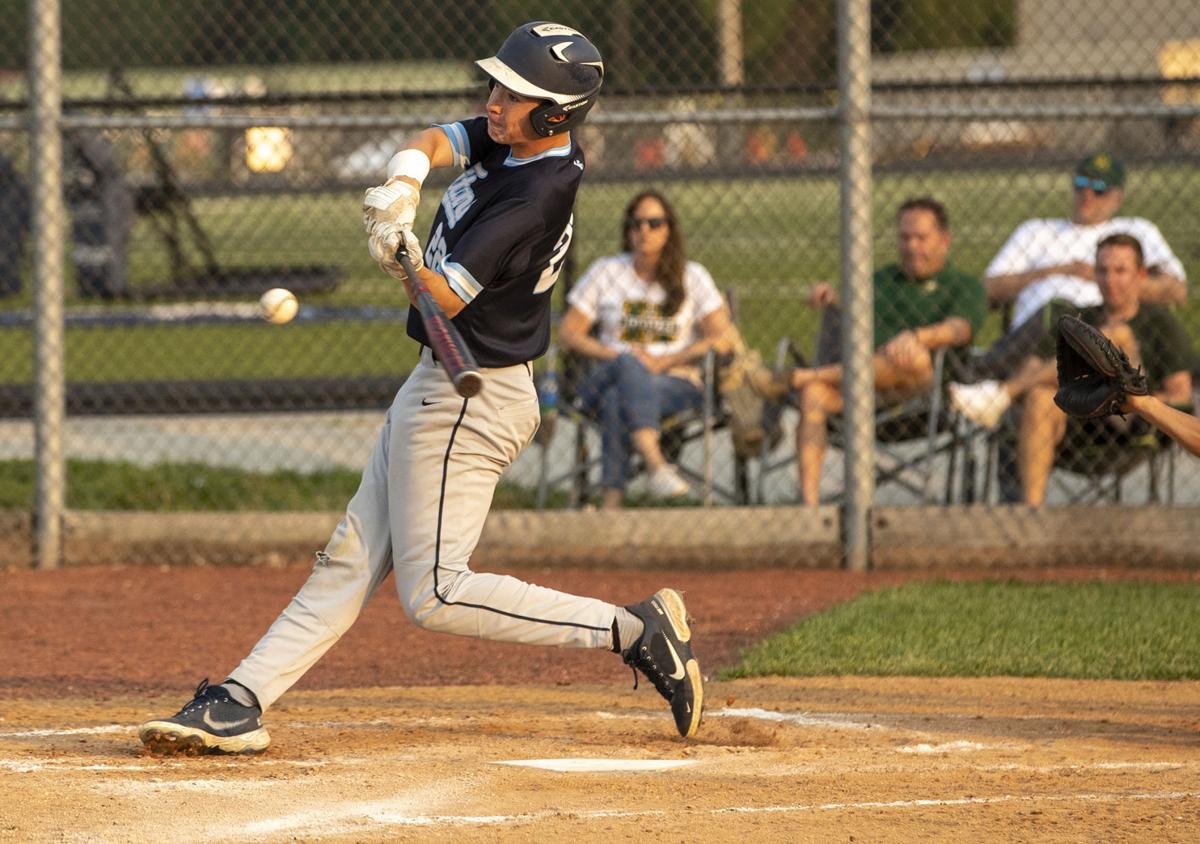 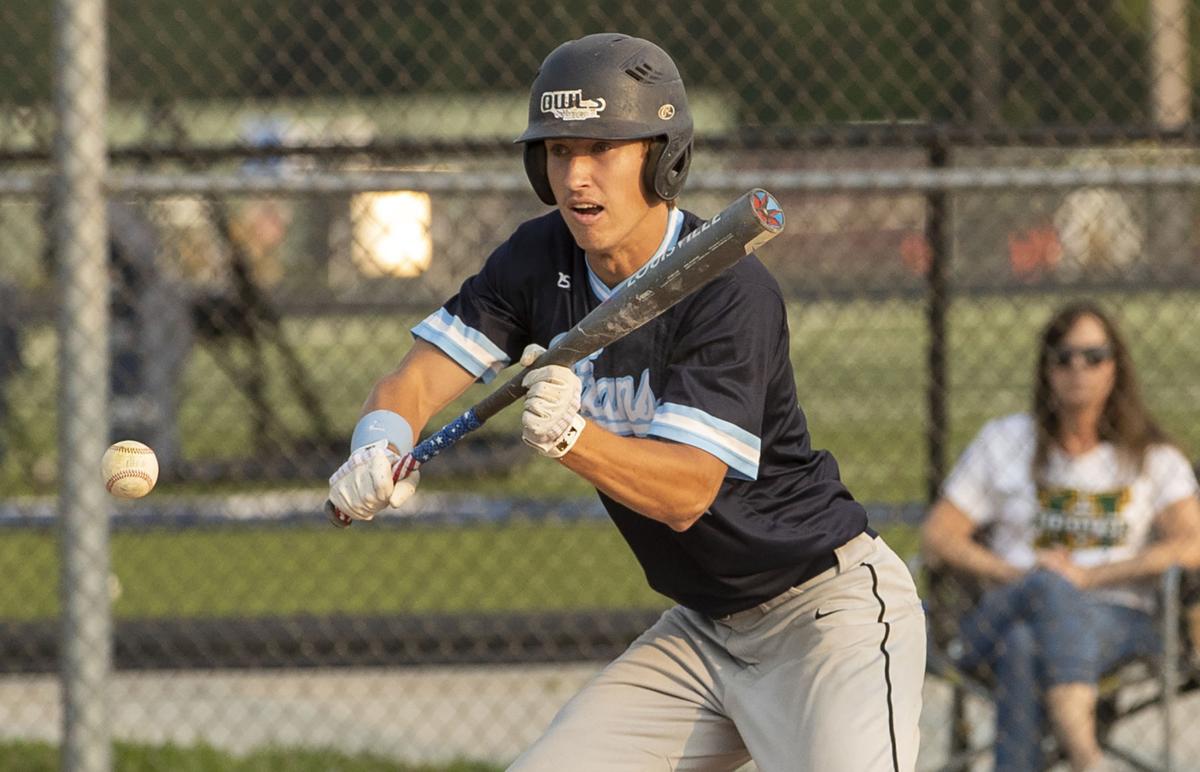 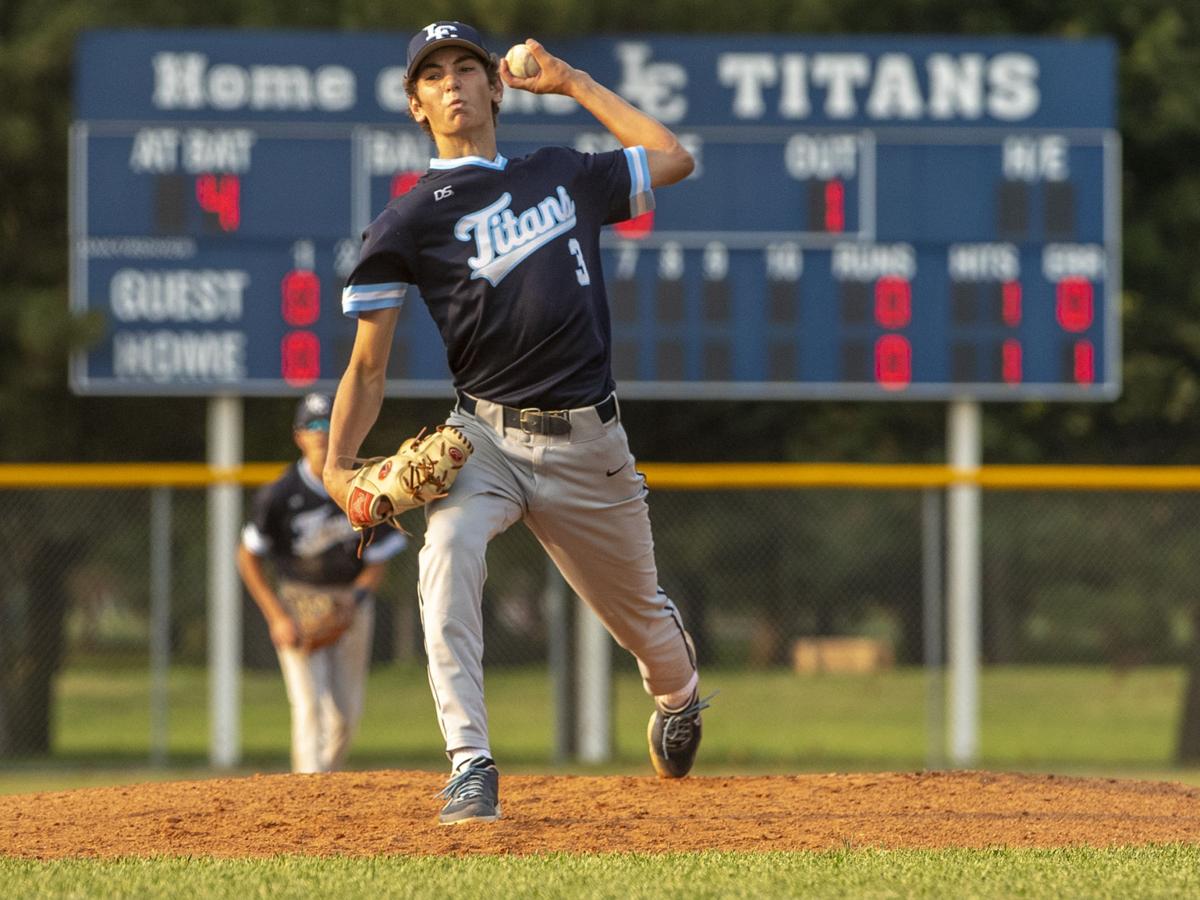 Last year, Lewis Central baseball was upset in the first round, this year the Titans made sure that didn’t happen again thanks to the leadership of their three seniors along the way to a 12-2 win over Des Moines Hoover in six innings on Friday at home.

After a scoreless first inning, the Titans took the lead with a pair of runs in the bottom of the second as Britton Bond connected for a lead-off hit. Bond would later score thanks to an RBI double bunt from senior Luke Meyer as there was also a fielding error from the Husky defense which allowed Meyer and Bond to take extra bases. Meyer within the same inning also scored thanks to a sacrifice fly to center field.

However, the Huskies weren’t going to let things get away so easily. Hoover immediately responded with two runs of its own to tie the game midway through the third.

Meyer however helped L.C. respond quickly with a one-out two-RBI single to score junior JC Dermody and junior Aaron Harrington. The Titans followed that with three up three down for the Huskies to retain a 4-2 lead after three innings.

“We had a lot of big hits early in the game,” Meyer said. “It was really big that we responded after they tied up the game. Cael got hot on the mound and helped us get our confidence back and get going again in the later innings.”

“That’s where we’ve changed throughout the year,” Titans coach Jim Waters added. “We knew that next inning was crucial to throw up a zero and take all the momentum away from Hoover.”

The Titans were far from done. Dermody connected for a two-out RBI double to score Cael Malskeit. After a couple of walks from Hoover’s senior pitcher Jared Fischer, the Titans loaded the bases, but couldn’t push any of those runners across for runs.

Seeing the opportunity, the Huskies loaded the bases after a Titan fielding error, a walk and a catcher interference call. Malskeit rose to the occasion and struck out three-consecutive batters to force Hoover to retire their half of the inning empty-handed.

“I just had to focus and throw strikes,” Malskeit said. “Things started rough in that inning, but I just kept calm and it worked out for me and I knew I had my fielders right behind me, but I was able to do it myself.”

Malskeit would strike out two more in the top of the sixth and then connected for a lead-off single in the bottom half of the sixth, which would start another rally for the Titans. Harrington hit a two-RBI double in the bottom of the sixth to score Malskeit and Dermody who got a hit of his own in between plays.

Later in the same inning, Meyer hit his third ball of the night for another RBI single to make it 8-2 Titans. Next play, sophomore Ty Thomson grounded out but collected an RBI in doing so putting the Titans firmly in the driver’s seat, up 9-2.

Jonah Pomrenke then hit an RBI which set up Malskit for a walk-off two-RBI single to close the night one inning early.

“All hit the ball well,” Pomrenke said. “We saw the same pitcher multiple times this game which helped time up his pitches. We finally came through and strung some big hits together to put the ball in play and brought in our runners to score.”

“I think we just got more confident after shutting them down for a couple of innings,” Malskeit added. “After seeing the same pitch multiple times we started to see him better and we capitalized.”

Malskeit and Dermody combined for nine strikeouts on the mound for L.C.

The Titans advance to play at Waukee on Monday. Waukee is coming off a 10-0 over Abraham Lincoln.

What sports are most affected by weather?

CARROLL — St. Albert advanced to the Class 1A baseball state championship game for the first time since 1999 on Wednesday, beating Alburnett 1…

St. Albert baseball earned a spot in the Class 1A state championship on Wednesday after defeating Auburnett 10-0 at Merchant Park in Carroll.

Simone Biles finds peace of mind at Olympics: An analysis, plus more from Tokyo

Maybe gymnast Simone Biles' decision to opt out of the Olympic team and all-around events isn't so stunning after all. Here's an AP analysis, plus more from Tokyo.

Tri-Center baseball posted a historic season, winning 29 games in 2021. The Trojans efforts led them to the state tournament in Carroll but th…

Lewis Central’s Aron Harrington (13) gets some love from teammates Jack Doolittle (23) and Trenton Johnette (24) after scoring during the third inning on Friday, July 16, 2021.

Des Moines Hoover’s Teran Bates, right, waits for the throw as Lewis Central’s Devin Nailor (2) slides back to first during the second inning on Friday, July 16, 2021.