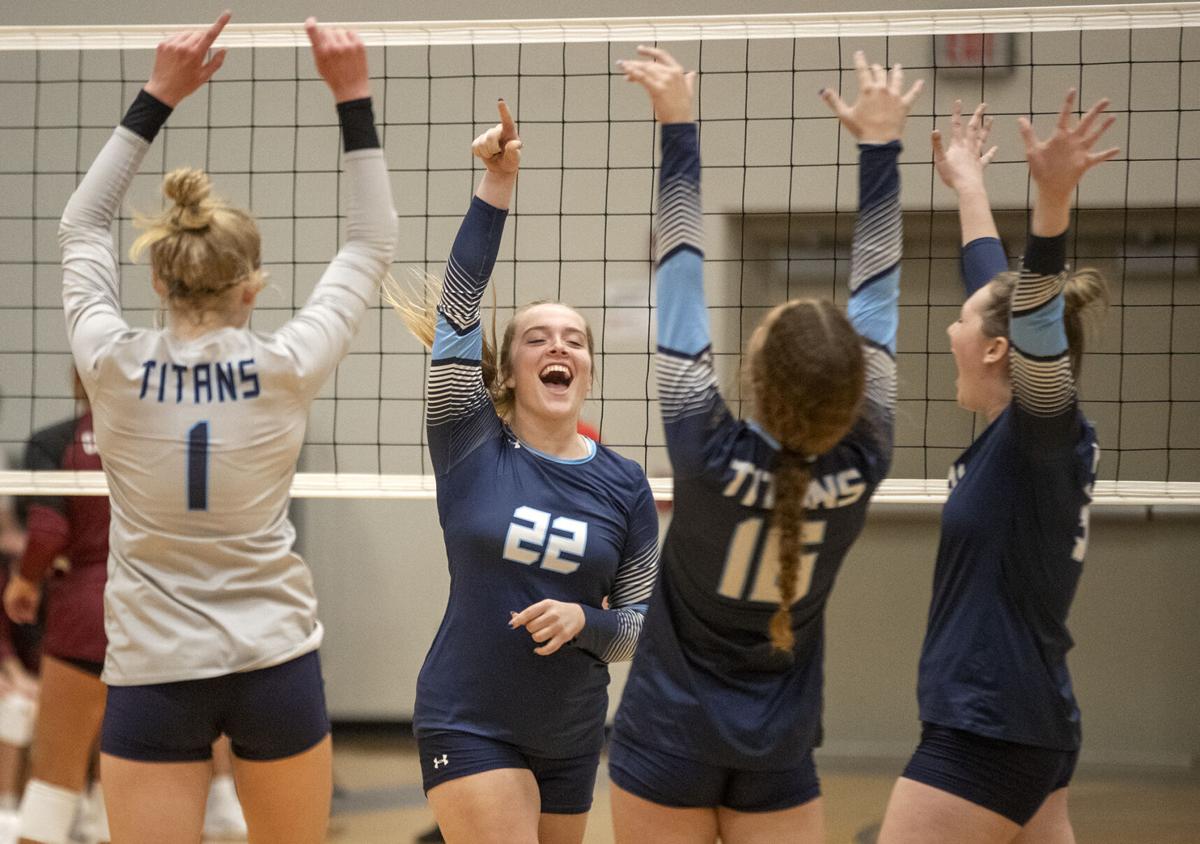 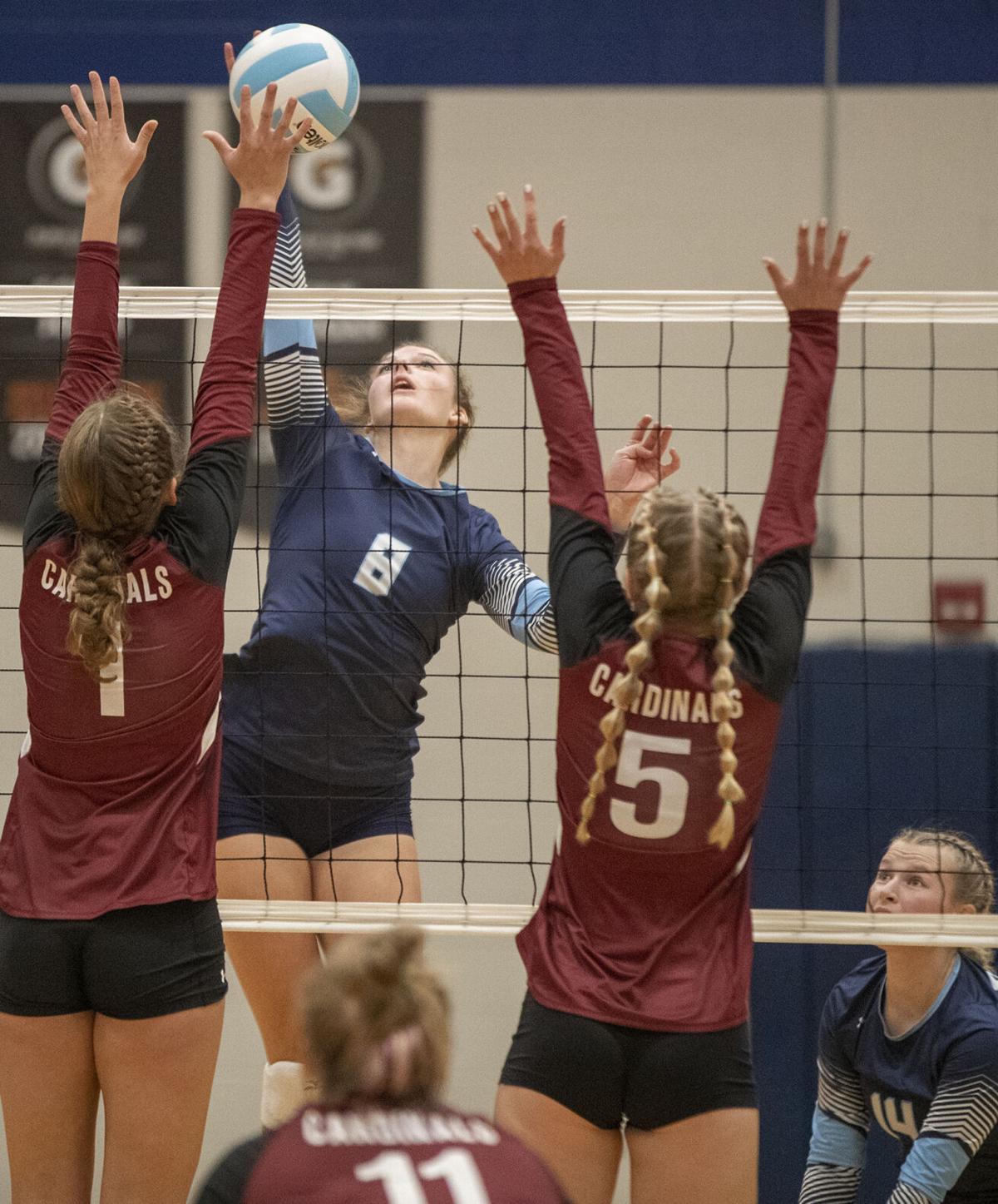 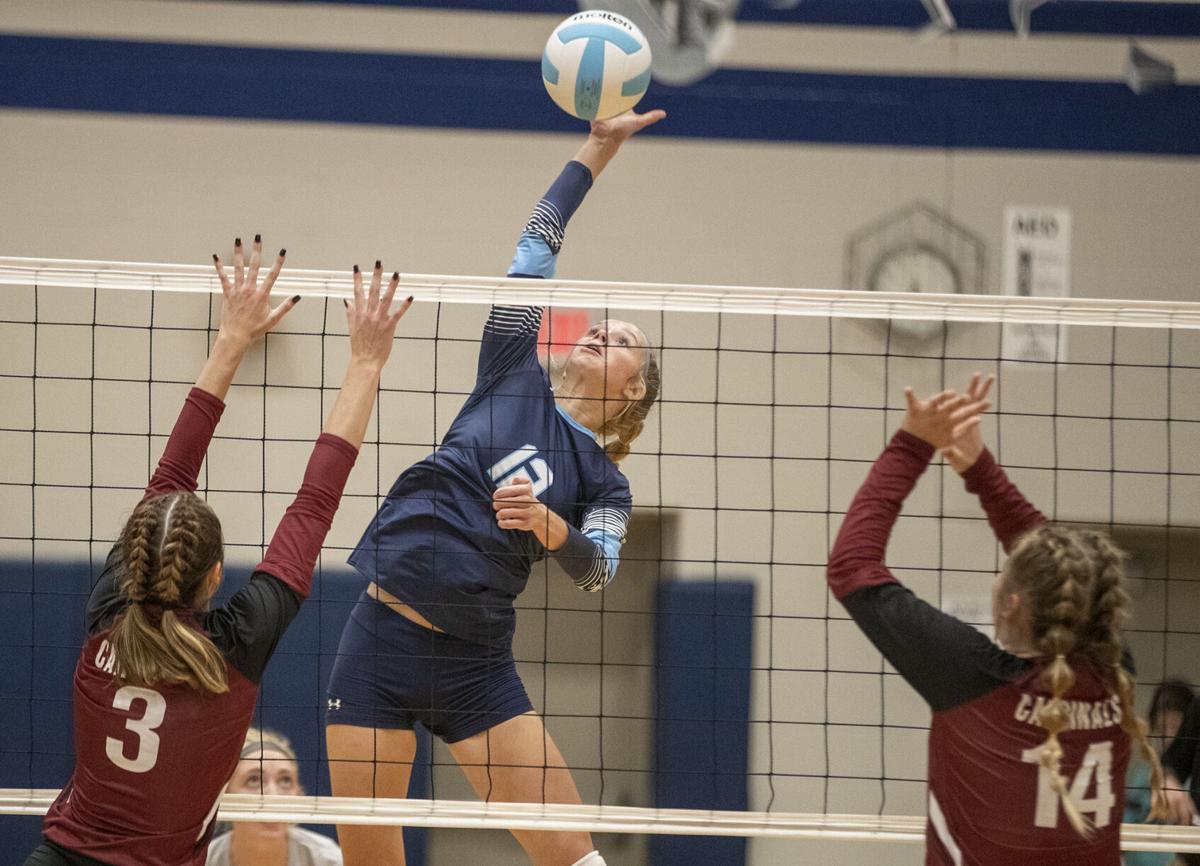 Clarinda’s Paige Millikan (3) and another defender get their hands up as Lewis Central’s Anna Strohmeier (12) hits the ball during the first set on Thursday, Sept. 16, 2021. 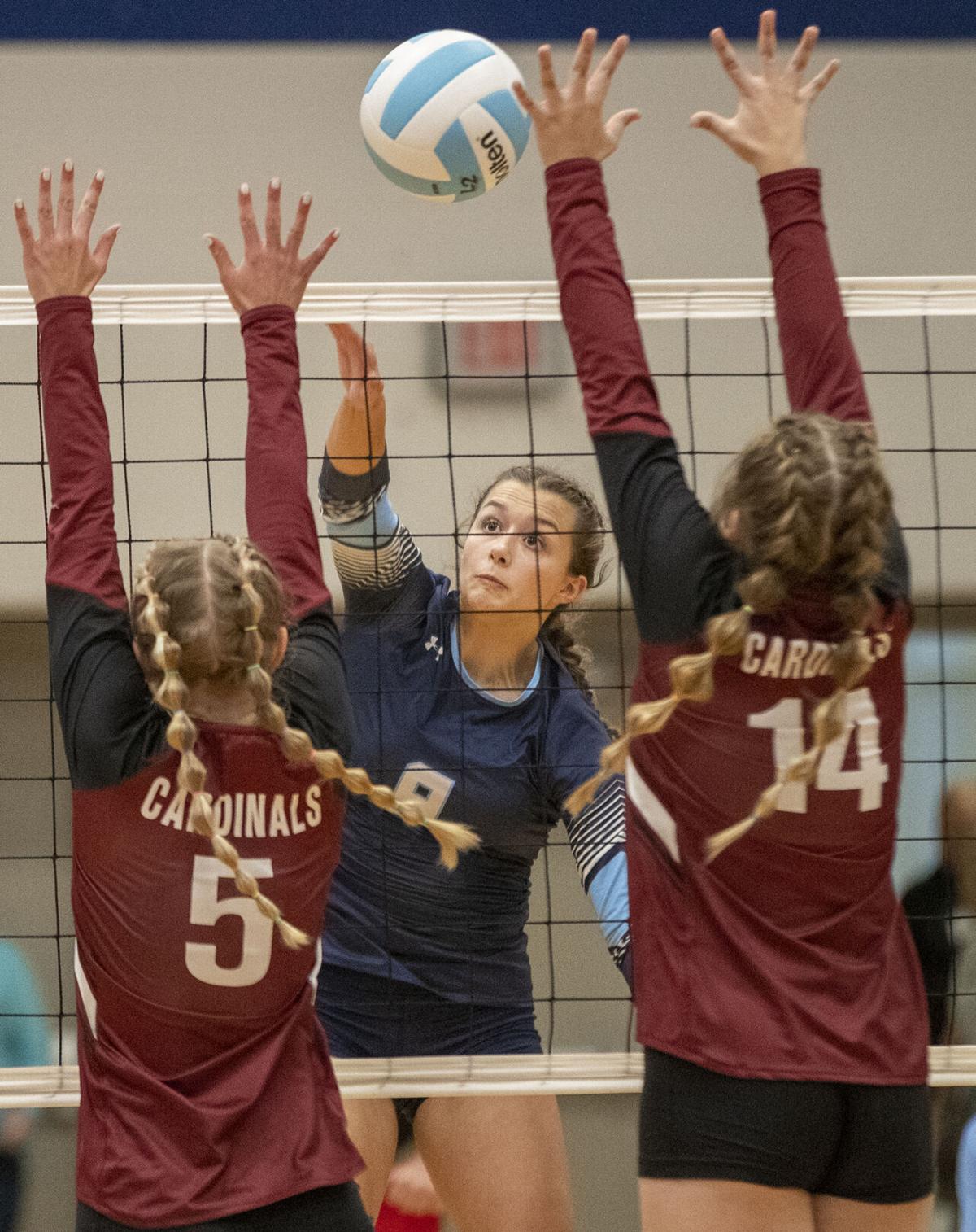 Clarinda’s Chloe Strait (5) and another defender get their hands up as Lewis Central’s Anna Galles (9) hits the ball during the first set on Thursday, Sept. 16, 2021.

The start of the 2021 season has been a tough one for Lewis Central volleyball. The Titans' persistence paid off tonight as L.C. clinched its first win in a three-set sweep over Clarinda (25-18, 25-23, 25-14) at home on Thursday.

“We’ve been playing really well lately,” Titans coach Mike Bond said. “Even on Tuesday, I thought we played really well. We lost a close one to a good Red Oak team, but tonight it was nice to get a win.

“We play a really tough schedule and I kept telling the girls that it’s going to pay dividends and I think it eventually did tonight. We were steady with our game plan and got it done tonight.”

The Titans pulled away late after going back and forth through set one to put themselves in the driver’s seat. Clarinda threatened to tie the match at one game each with a 22-18 lead late in set two, but the Titans rallied back to take the match in thrilling fashion 25-23. After recently falling in some close sets that led to losing some competitive matches, it felt good to fight back and feel the good side of a rally.

“It was a fun game,” sophomore Anna Strohmeier said. “We got a little off track in the second set but we got it together and we came together to win the set and that momentum carried over for us into the third set."

Strohmeier led the Titans with 10 kills, she also had a block to help lead the attack in set three. With some help from multiple players, including junior Maddie Bergman, the Titans pulled away in set three and capitalized on some early Cardinal errors to complete the sweep and notch their first win of the season.

“It feels good to get the first win,” Bergman said. “We got some tough games ahead with Harlan next week, and a tournament this weekend. We’re looking forward to those and hopefully win both of those tests.”

Bergman was another force at the net with eight kills and a block. Notably, Ashlynne Havermann contributed five more kills to go with an ace and block. Brooke Larsen served the ball well for the Titans recording eight aces for the match.

Lewis Central will look to pick up some more wins this Saturday as the Titans head to the Bishop, Bedier Tournament at Bondurant-Farrar. The first game is against Knoxville at 10 a.m.

Gene Chinander, the father of Nebraska defensive coordinator Erik Chinander, was killed in a one-car accident Thursday in Iowa.

Class 2A No. 12 Treynor volleyball came into the season with a lot of high goals. The Cardinals accomplished one of those goals last week when…

The Rams snapped their two-game skid with a big win over Thomas Jefferson in Glenwood on Friday night 55-21 on Senior Night.

Class 2A, 1A, A and eight-man teams now know their first-round opponents for the 2021 football playoffs after the regular season ended on Friday.

St. Albert football scheduled an additional game against Shenandoah on Friday but has since canceled that game.

St. Albert football knew that Friday’s game at AHSTW would be the last time they’d take the field together as a team.

Class 4A No. 8 Lewis Central struck early and often to put away Dallas Center-Grimes 42-10 at Titan Stadium on Friday night.

St. Albert junior Colin Lillie capped his regular season with a victory at the Missouri Valley Cross Country Meet on Saturday after completing…

Clarinda’s Paige Millikan (3) and another defender get their hands up as Lewis Central’s Anna Strohmeier (12) hits the ball during the first set on Thursday, Sept. 16, 2021.

Clarinda’s Chloe Strait (5) and another defender get their hands up as Lewis Central’s Anna Galles (9) hits the ball during the first set on Thursday, Sept. 16, 2021.