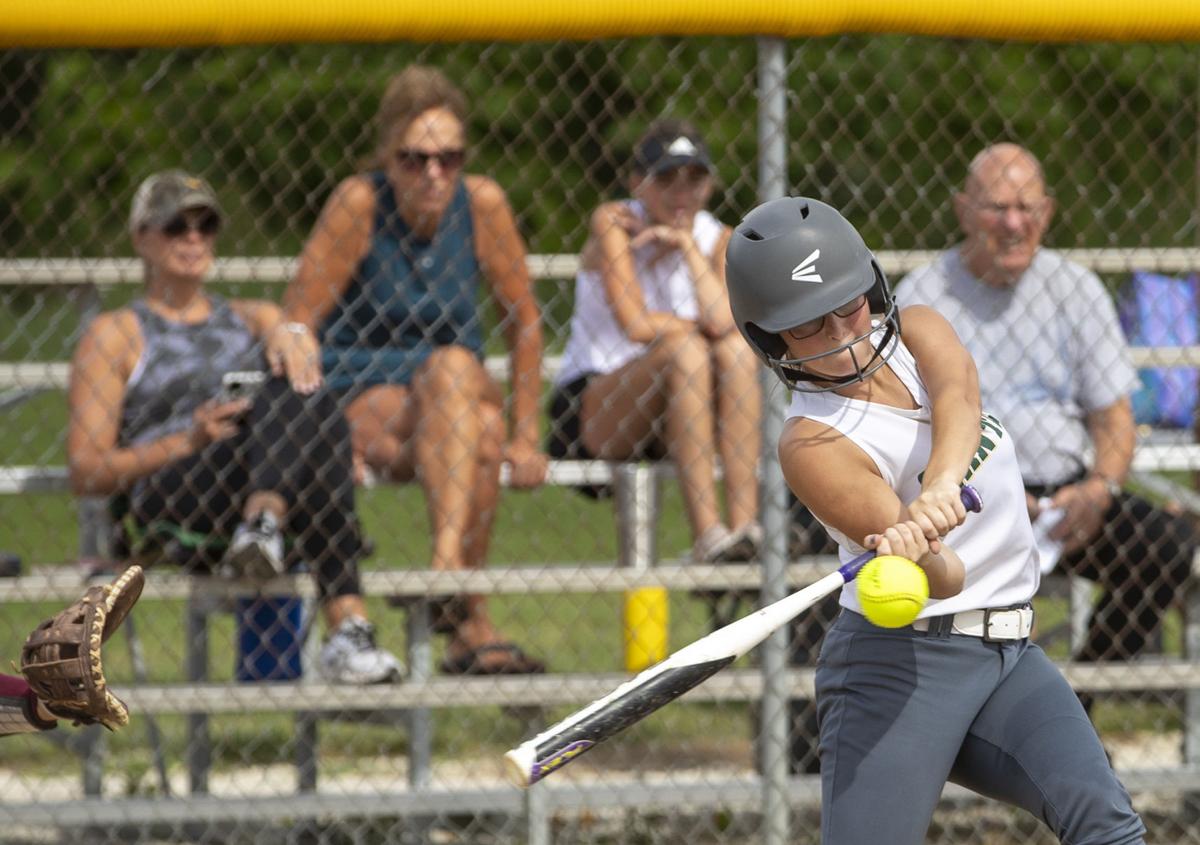 St. Albert’s Sarah Eggerling bats during the first inning of the first game of two against Shenandoah on June 25. 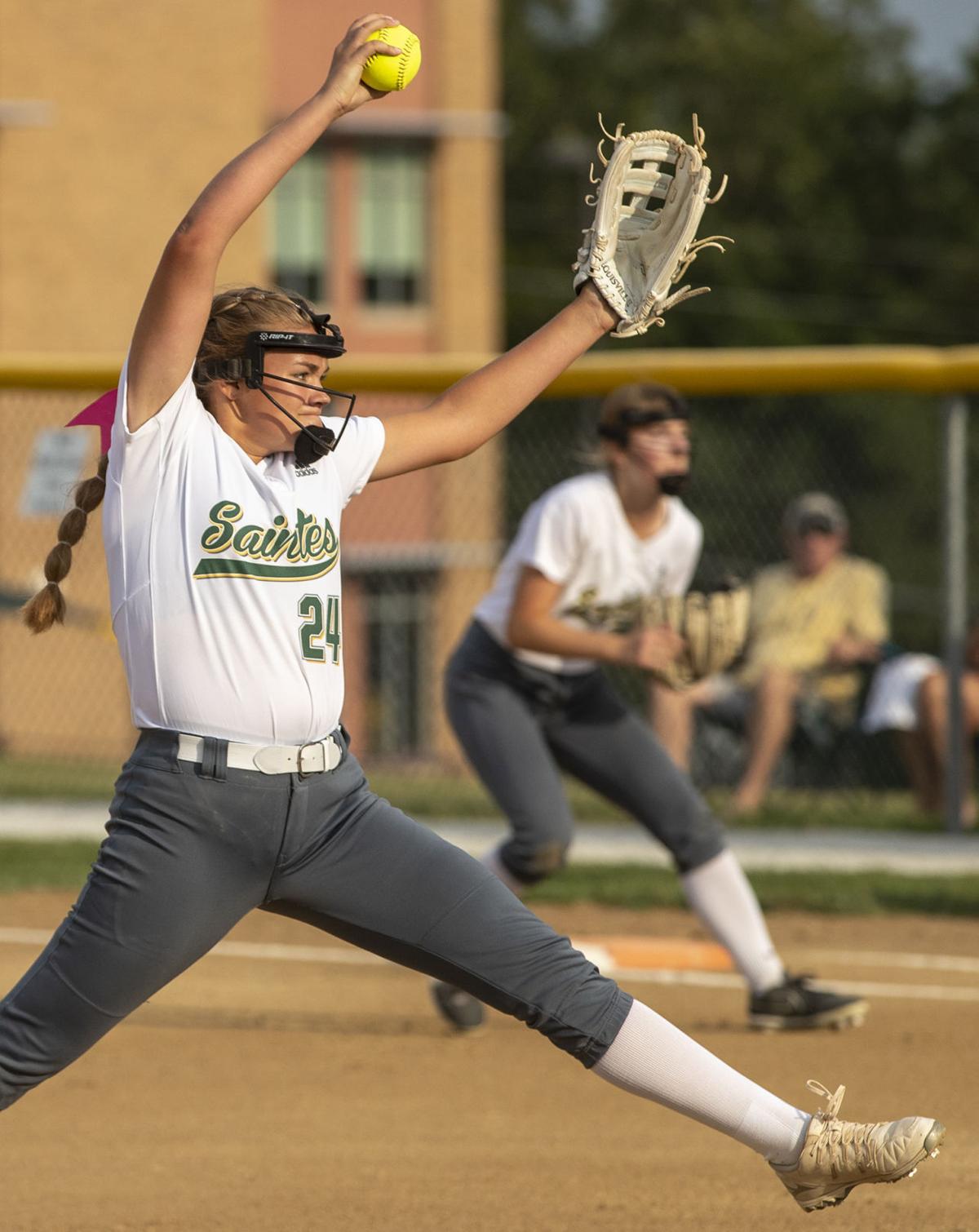 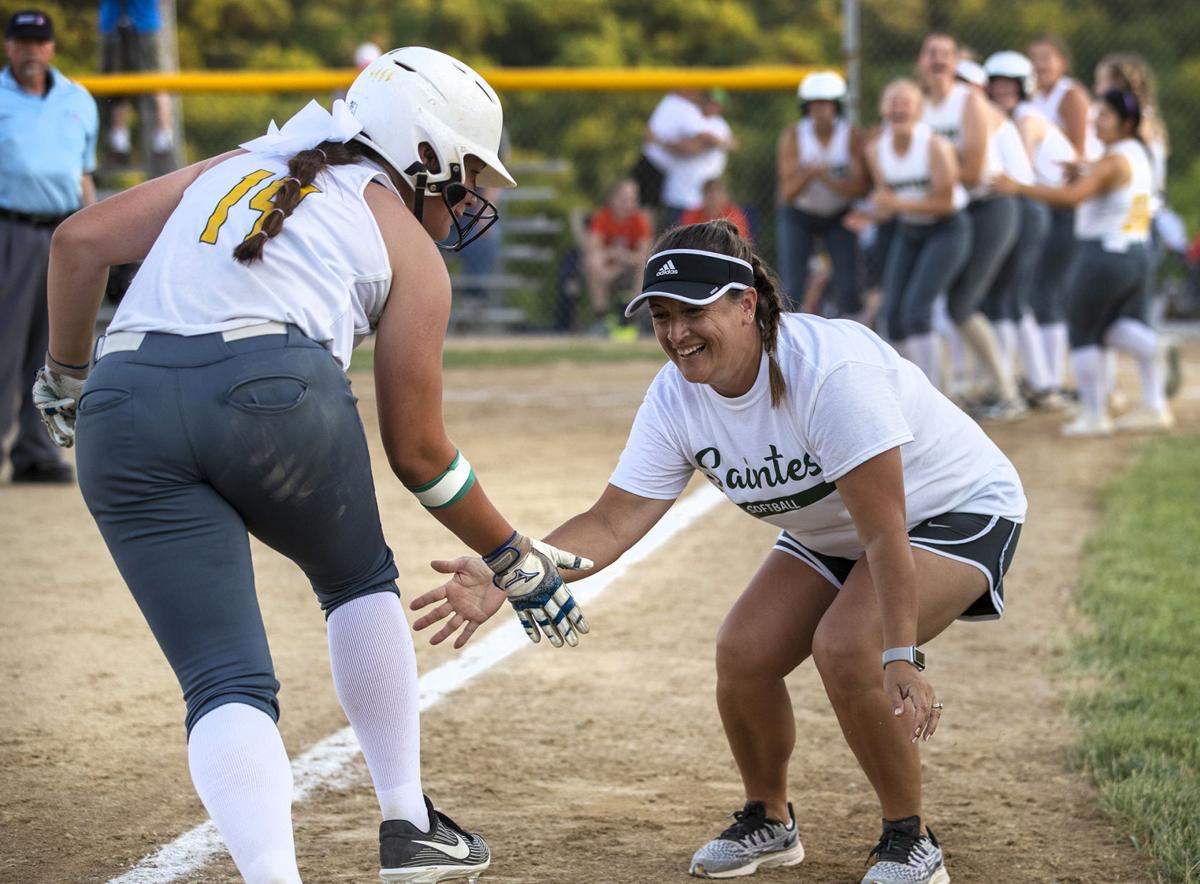 St. Albert’s Lainey Sheffield (14) gets a low five from head coach Lyndsay Daley, right, after clocking a home run during the third inning on June 9. 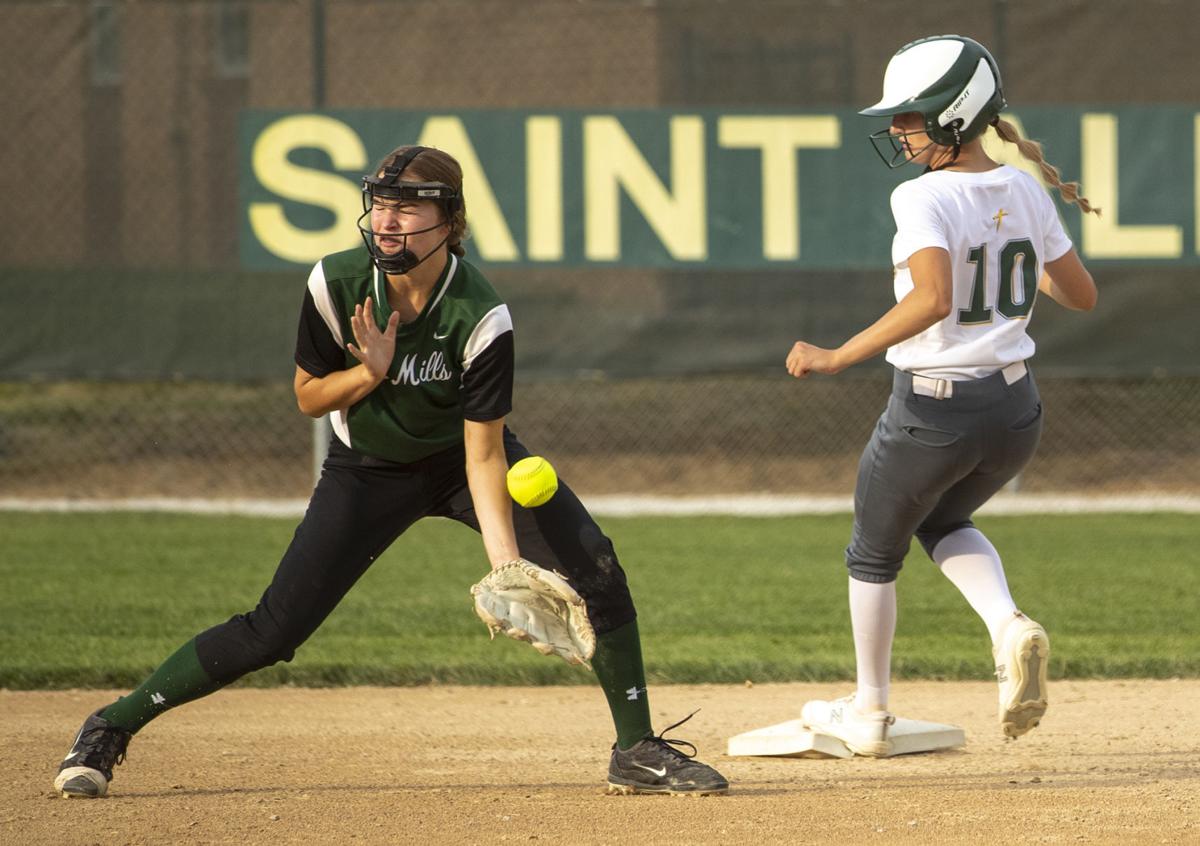 While one may look at St. Albert softball’s record of 12-21 and think of it as just another season, this young but talented Saintes team and Head Coach Lyndsay Daley will say it’s only the beginning and the future looks very bright.

After some rough patches to start the season, the Saintes strung three wins in a row, including an impressive win over Harlan to end their regular season.

“I was really proud of our season especially with how we ended it,” Daley said. “We started things kind of slow, but I was very pleased with how we were playing towards the end of the season. You want your team to be playing its best ball at the end and I think that’s what we were doing.

The 12 wins are the most for the Saintes since the 2015-2016 season where they won 13 games. This season though had plenty of highlights thus the reason for optimism for the future, including breaking the school record for most home runs in a season with 16, shattering the previous record of 11.

In fact, the freshmen on this team hit 11 home runs on their own.

“This stat alone has us very excited about what we can do next year,” Daley said. “The girls want to put in work earlier in the year than they have in past years. I think they understand we could be really good, and these next couple of years could be really special. In the meantime, they know we still need to put the work in.

“We have a lot of girls coming back, some of those girls may not have played as much but are still very talented, I know a couple of them are going to start working on pitching. The future is very bright and they’re all very excited and hopefully, they all keep putting in the work.”

With all the production St. Albert will be returning to the fold over the next couple of seasons, one may think this group of girls will break and set many new records in the upcoming season.

The Saintes have just one player graduating, Sarah Eggerling. As the team’s only senior Eggerling batted a .218 as she connected for 17 hits throughout the year and was a key contributor to the defense at right field. Perhaps of equal importance, Eggerling was a leader by example to this young team.

“Sarah was a hard worker and improved so much over the last five years,” Daley said. “She was a quiet leader, so she led by example. She played in many positions and would play wherever our team needed her. Over the last two years, she was a staple in our outfield and will be missed next year.”

In losing just one player from this year’s team, Daley and the Saintes expect a lot of returners to step up into even bigger roles next season. So much so, that it’s difficult for Daley to single out any one of the returner’s expectations, but does have a group expectation.

“It’s really hard to pick even a couple of girls,” Daley said. “When you have 12 returning freshmen and others in that mix, I can’t even say just a few names.

“I expect every one of them to keep pushing each other, they all know that nothing is given and even the returning starters know if you want to be the starting whatever on this team, you are going to have to work for that spot again. I think with that in mind they’re going to continue to push each other and I’m very excited to see that.”

With individuals like Alexis Narmi, who led the team with a .308 batting average and was the main pitcher on the team, in addition to girls like Kylie Wesack, Georgie Bohnet, and Sophie Sheffield, who started all 34 games this past season as freshmen believe the Saintes could be making a lot more noise as soon as next season.

Especially, with girls like Lainey Sheffield and Mallory Daley returning as the team’s only two seniors next season, and others like Anna Helton, Landry Miller, and Jessica McMartin all becoming juniors in the upcoming season these girls and many others each have big hopes and dreams for the seasons ahead.

While individual expectations aren’t as simple to figure, the team certainly has a mutual aspiration for the future seasons. The Saintes hope with all their returning talent and experience, the Saintes can find their way to their first-ever state tournament appearance.

“These girls are hungry and with that, I think great things are on the way,” Daley said. “Their ultimate goal is to make it to state for the first time in school history. Some of these girls have experienced that feeling in other sports. We have a lot of successful girls athletic programs, these girls want to get our softball program up there with the rest of them. Finding a way to get to state is this group’s ultimate goal.”

The Saintes have had one winning season since 2015-2016 where the team went 13-12 overall. However, if things keep trending the way they are with this young bunch, it’s reasonable to think that even greater success could be well on its way for this program over the next few years.

Is Sean Payton an early frontrunner for Coach of the Year?

Lewis Central volleyball gets first win of the season

Lewis Central volleyball gets first win of the season

Seven years ago, a trip to a lacrosse tournament in Colorado opened Blake Cyboron’s eyes to a new world of possibilities.

No. 5 Lewis Central loses battle of Titans to No. 1 Indianola

A false start penalty at the 1-yard line with 20 seconds remaining in the game proved to be the defining moment for Class 4A No. 5 Lewis Centr…

Thomas Jefferson football came within one score of erasing a 21-point deficit but allowed some late scores in a 49-22 loss at home.

The start of the 2021 season has been a tough one for Lewis Central volleyball. The Titans' persistence paid off tonight as L.C. clinched its …

Underwood football led St. Albert 55-7 at halftime en route to a 69-7 win in Council Bluffs to stay undefeated at 3-0.

The No. 1 basketball recruit in Iowa according to 247Sports, Abraham Lincoln senior Josh Dix wasn’t quite sure where he wanted to go to colleg…

Lynx football bounces back against Wolverines

Abraham Lincoln football bounced back from a loss last Friday to defeat Sioux City West on the road Thursday night 55-33.

St. Albert’s Sarah Eggerling bats during the first inning of the first game of two against Shenandoah on June 25.

St. Albert’s Lainey Sheffield (14) gets a low five from head coach Lyndsay Daley, right, after clocking a home run during the third inning on June 9.