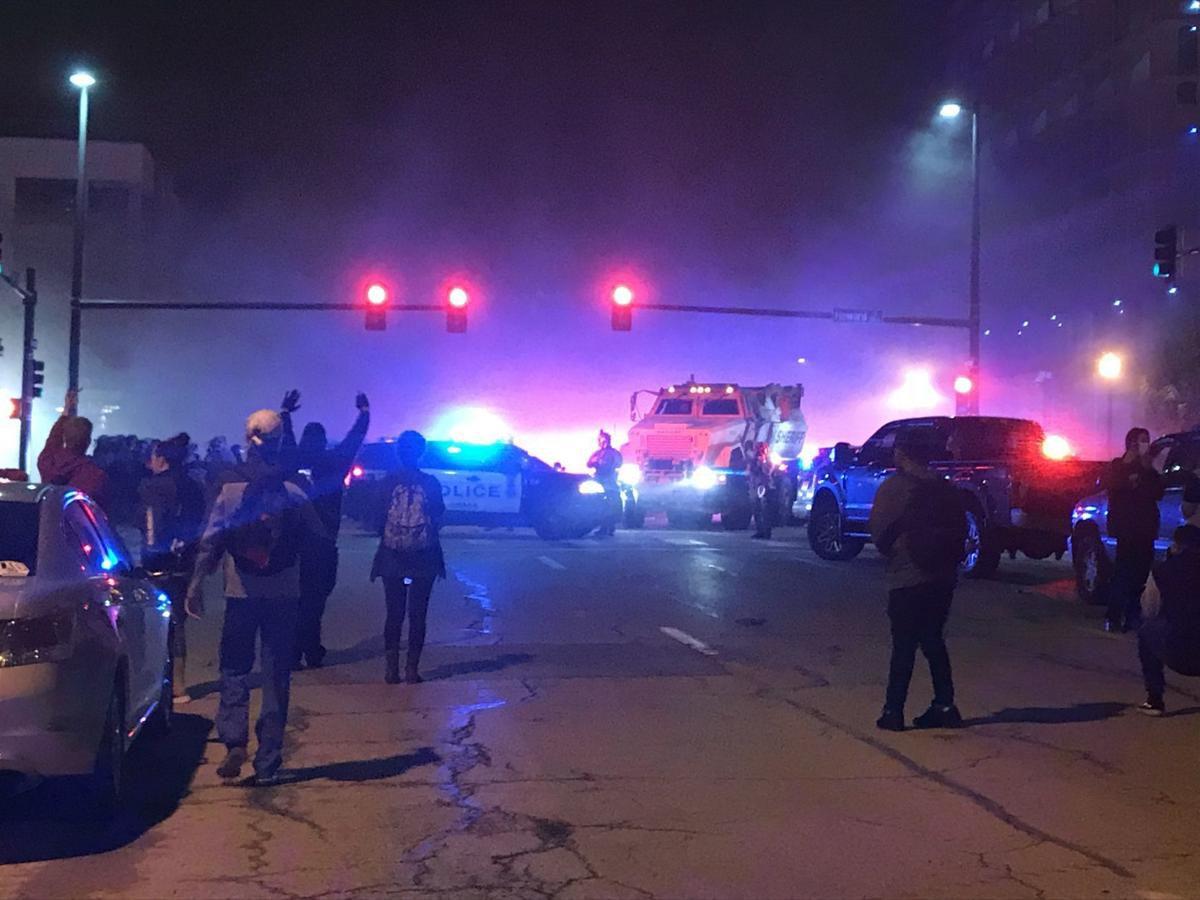 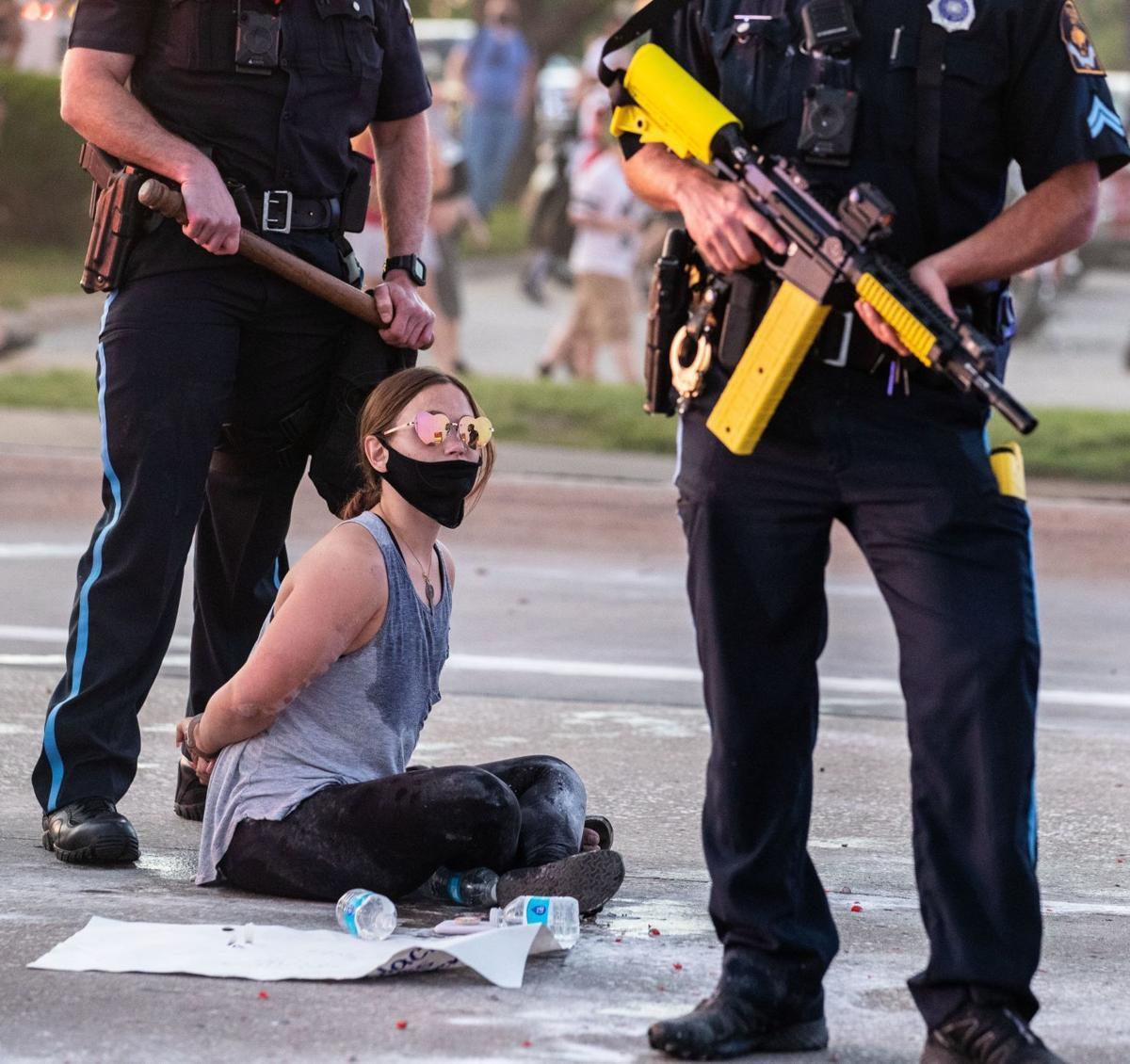 Omaha police officers are reflected in the sunglasses of a woman who was arrested on May 29 after sitting in the eastbound lane of Dodge Street.

Protests over the death of a Minneapolis man at police hands erupted in Omaha for a second night in a row Saturday, escalating from an organized demonstration at 72nd and Dodge Streets to a violent and chaotic scene downtown.

Police processing a shooting scene Sunday morning in the 1200 block of Harney Street verified that a person was killed there amid protests late Saturday.

The shooting occurred at about 11 p.m., and one person was seen being loaded onto a stretcher. Within minutes, another gunshot was heard.

"Get down, they're shooting," police told those gathered outside, some crying. By 11:30 p.m., Omaha police said they had a suspect in custody.

Protesters earlier Saturday had returned to one of Omaha’s busiest and most visible intersections to once again demand change and justice in response to the death of Minneapolis man George Floyd at the hands of police.

After tear gas and pepper balls sent the 72nd and Dodge crowd scattering, more protests broke out about 10 p.m. in downtown Omaha and continued past midnight.

Police sirens and chants blared from 14th and Harney Streets. Reinforcements raced east on Dodge Street from one protest to another, and police blocked off downtown streets.

People set off fireworks, spray-painted businesses with graffiti and smashed windows and doors on Harney Street. Sounds of conflict filled the night: the booming of tear gas canisters being fired and what sounded like flash-bang grenades going off.

Police said someone lobbed a Molotov cocktail at 14th and Jackson Streets around 11 p.m.

Earlier in the night, as a light drizzle fell and police helicopters buzzed overhead, several hundred people gathered on the sidewalks at 72nd and Dodge and in the Target parking lot.

They waved American flags, hoisting handmade signs with messages such as, “If you aren’t angry you aren’t paying attention,” and shouting chants like, “George Floyd, say his name” and “Hands up, don’t shoot.”

“As an African American female, being here means standing up for what’s right,” said Sotonye Green. “The list of people whose lives have been ended due to police brutality has grown too long.”

But, similar to Friday, the situation began to devolve as the night wore on.

Friday night, police fired tear gas and pepper balls at a similar protest that drew an estimated crowd of at least 1,000 people that spilled into the streets.

That scene repeated itself Saturday night.

Several hours into the protest, Omaha Police Chief Todd Schmaderer said an Omaha city prosecutor gave police the OK to declare the gathering unlawful. Schmaderer said there were water bottles, eggs and rocks being thrown at police, even as some protesters implored others not to provoke them. The police chief said a man reportedly had a container of urine and there were reports of people with guns in the area.

A few agitators overshadowed the peaceful actions of most of the crowd, he said.

“I understand tension is high all across the country, but it’s not going to help matters if somebody gets hurt,” Schmaderer said.

Police used more pepper balls and tear gas to disperse the crowd and push it westward about 8 p.m., when the protest was expected to end. Clouds of tear gas hung in the Target parking lot as protesters gagged and gulped water.

Omaha Mayor Jean Stothert said the protests had once again gotten out of hand.

“For two nights now, protesters have misused their right to lawfully assemble, risking the safety of other citizens and police officers,” she said in a statement. “It is time to stop inciting violence.”

Others have criticized Omaha police and the other law enforcement agencies who responded for escalating the situation with their use of riot gear and tear gas.

Before the start of the demonstration, green-and-yellow barriers had been installed in the medians on Dodge, to block crowds from congregating there, and police surveyed the area from the roof of the nearby Do Space building. The doors of the Target had been boarded up.

By 6 p.m., as the crowd swelled to hundreds, police blocked traffic on Dodge Street and advised drivers to avoid the area. Officers arrived by the busload, pouring out of Metro Transit buses, many wearing riot gear and carrying batons.

Protesters largely remained on the sidewalks or stood in the parking lots of surrounding businesses.

They came prepared, too, bringing water bottles, baking soda and milk to soothe their eyes and skin from the burn of tear gas. Many wore masks or bandannas, an attempt to protect themselves and others from the coronavirus that has infected several thousand in Douglas County.

They played music and chanted “no justice, no peace.”

The organizers of one Facebook event for the protest told participants to raise their voices against injustice but to stay peaceful.

“Remember, this is not to bring violence to the Omaha area,” they wrote. “We must keep this a peaceful protest and stand up for what is right while doing it the right way.”

Kyle McCandless was at Friday’s protest and returned again.

“Yeah, it got a little hectic and turned into a crazy riot, but keeping your distance and peacefully protesting, we should be good,” he said Saturday night.

Before the tear gas was fired, a few minor altercations flared up.

A fight almost broke out between a protester and a man who he said shouted a racist slur. The protester was held back by others in the crowd. Police handcuffed several protesters on one corner. And three trucks flying “Blue Lives Matter” flags in support of police briefly parked in the Petco parking lot before taking off amid shouts from protesters.

“Last night it was peaceful for a long period of time and then it wasn’t peaceful,” he said. “We had some property damage, a few minor injuries, and we don’t want any of that tonight.”

“If we can avoid injuries, avoid property damage and people can still practice their free speech, it’s a win-win for everybody,” he continued. “We have a lot of folks in the group also working to keep the peace.”

Similar protests against police brutality have erupted across the country in the wake of Floyd’s death, with some turning destructive or leading to clashes between police and protesters. Floyd, an unarmed black man, died after a white police officer knelt on his neck.

Protesters marched on O Street in Lincoln on Saturday night, too.

As tensions rose Friday night, 21 people at the protest were arrested on suspicion of various charges — gun possession, disorderly conduct, destruction of property or failing to disperse. Several businesses had their windows broken or were sprayed with graffiti.

Omaha police officers are reflected in the sunglasses of a woman who was arrested on May 29 after sitting in the eastbound lane of Dodge Street.